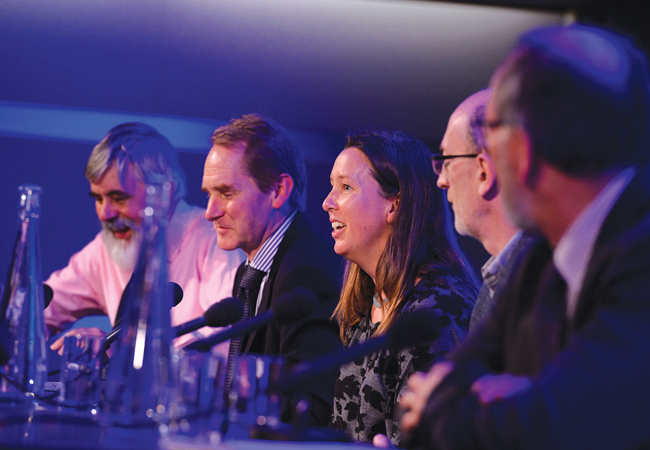 Building services professionals will soon be contractually bound to offer analysis of energy performance data to clients, according to speakers at the CIBSE Building Performance Conference.

A theme throughout the first day at the QEII Centre in London was frustration around digital data. Speakers said the availability of huge quantities of building performance information is key to solving the ‘performance gap’ – although gathering it efficiently and using it for meaningful analysis continues to elude large parts of the industry. 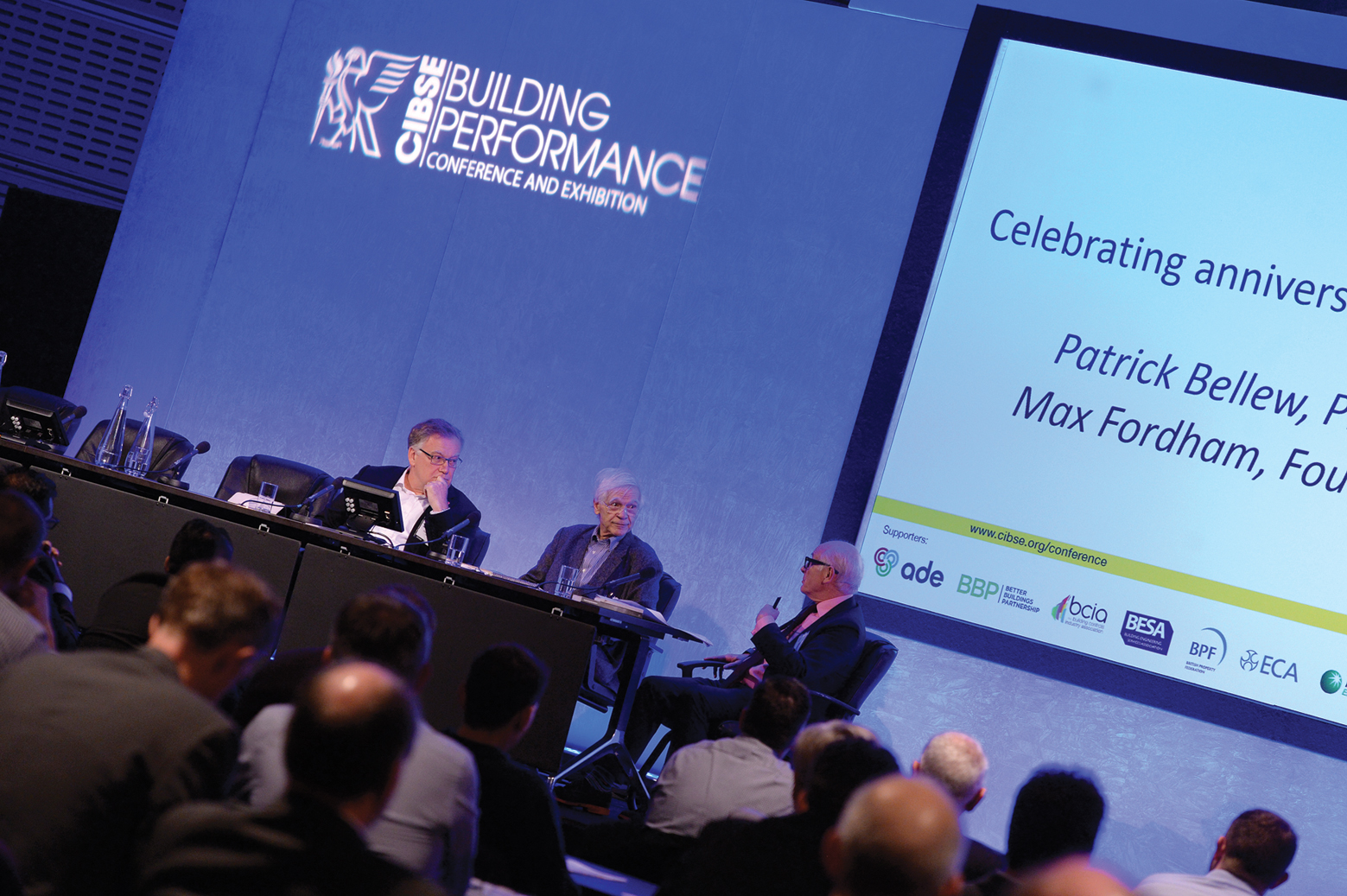 Several data specialists urged engineers to be mindful that – while ‘smart’ technology is widely available – it is not always a ‘smart person’ who gets the job of operating the system once the building is occupied, so better and easier user interfaces are crucial.

Casey Cole, of Guru Systems, said engineers would soon be legally liable – and their personal indemnity (PI) insurance would come under threat – if they fail to deliver good-quality, usable performance data to their clients. ‘Digital can close the information loop and help clients procure better, and then measure to ensure they get what they ordered,’ he said. ‘The key is to take the data and feed it back into the design process – but, the problem is, we are not paid to stick around for long enough to close the information loop.’

Alex MacLaren, of Heriot-Watt University, added that engineers had a ‘professional responsibility to pay more attention to the asset we create, and that means using the data more intelligently’. Current systems for evaluating data were ‘cumbersome’, but would improve, she said.

‘We need to demonstrate better value to the client,’ added MacLaren. ‘The data can do this if we develop a really brilliant app that shows clearly, for example, how well the building is doing and how much it is saving the user.’ 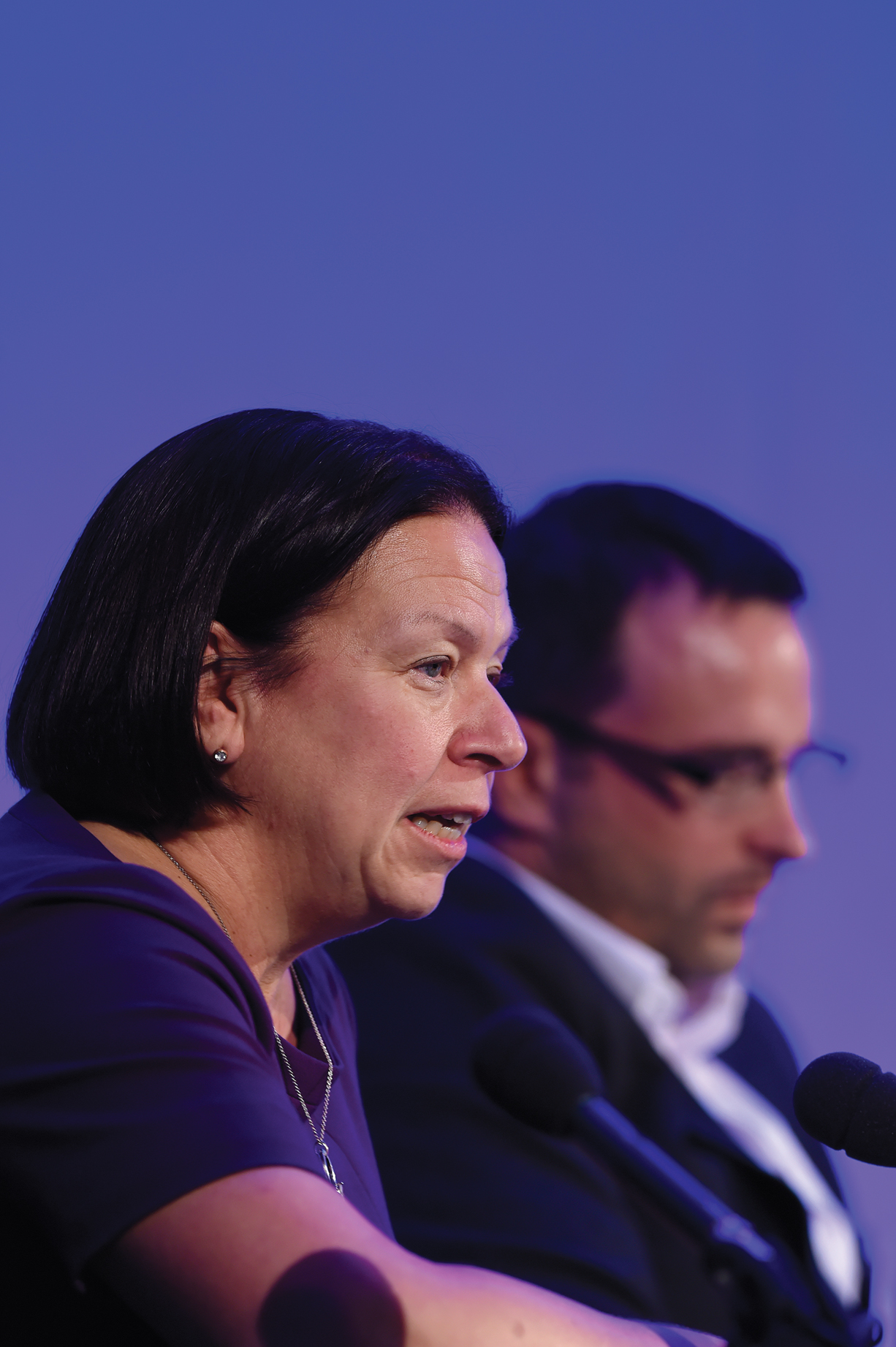 Debbie Hobbs calls on the industry to design for performance

Clients can now measure almost anything in their building very cost effectively, but turning that data into something useful is proving more difficult, said Mike Darby, of Demand Logic. ‘The data is there to allow full witness testing of a building post-commissioning; the issue, though, is having the processes to crunch that data and make it useful. The challenge is to do this quickly enough so the problems don’t languish.’

This makes the availability of large amounts of performance data a threat as much as an opportunity, according to the conference session chair, Les Copeland, of WSP. ‘Digitisation is creating headaches because we haven’t fully understood how it translates into good building operation,’ he said, before adding that the industry would now have to deal with greater scrutiny. ‘That will bring us trouble to start with, as clients will see exactly where the problems are. However, in the long term, it will allow us to design better.’

David Matthews, of Hoare Lea, said data needs to be standardised so proper comparisons can be made, adding: ‘At the moment it isn’t, so we are not getting the trends we expected.’ Meanwhile, Mat Colmer, of Digital Catapult, believes focusing on what people need – rather than what they want – makes for a good digital strategy. ‘Collecting too much data can slow you down because you still have to crunch it,’ he said.

Colmer gave examples of technologies that show the way the industry will change, including: Microsoft’s HoloLens, which blends holograms with the real world; MX3D, which allows industrial robots to ‘draw’ metal structures in the air; and Blockchain – a coding technology that removes the middleman from monetary transactions. ‘The transaction itself is the verification process, potentially dispensing with the many intermediaries in a supply chain,’ said Colmer. ‘These technologies will pave the way to what will happen in the future.’

Legal & General Property’s sustainability manager, Debbie Hobbs, said the industry is not designing for performance. The building engineering supply chain did not understand how buildings were operated, she added, so was failing to adapt its designs and systems to the end user. The project process was flawed and facilities management was procured at the lowest cost; as a result, built assets were undermined because of the ‘very low skills base’ involved in their operation, Hobbs said. 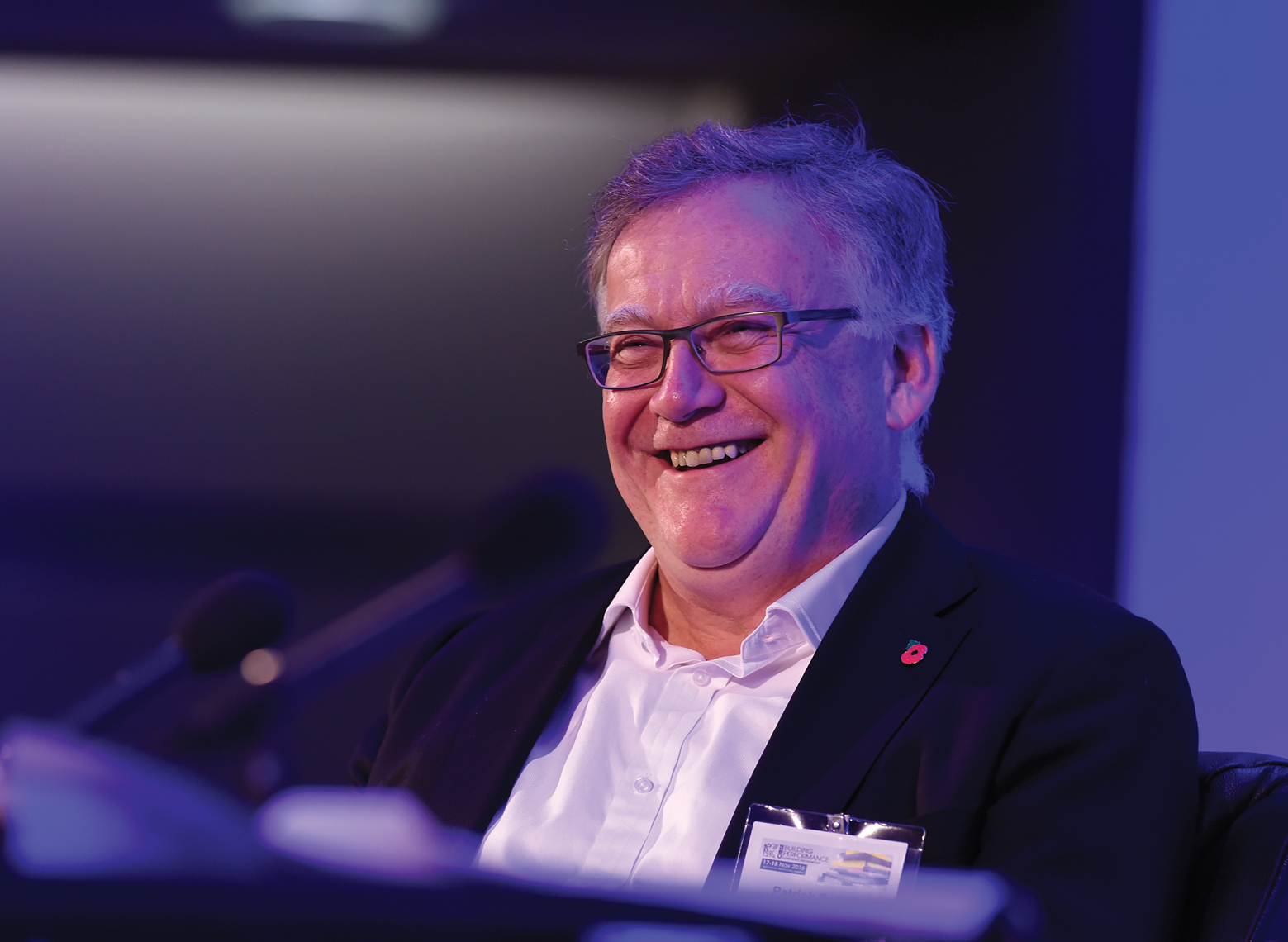 Neil Pennell, head of engineering and design at Land Securities, said building operating problems are at a very basic level, with energy meters being wrongly calibrated and badly installed, and control systems failing to perform even basic functions.

‘If the information we get from our meters is wrong, then the information we send to tenants for billing is wrong, and the energy performance data is wrong,’ he said. ‘As buildings become increasingly sophisticated, you can have hundreds of meters all delivering inaccurate data.’

Pennell added that the quality of smart technology ‘has ramped up, but the training of building operators hasn’t’, and that many controls engineers ‘don’t know how to read a psychometric chart, so can’t properly set up the control systems for the building. They just turn things on and hope.’ 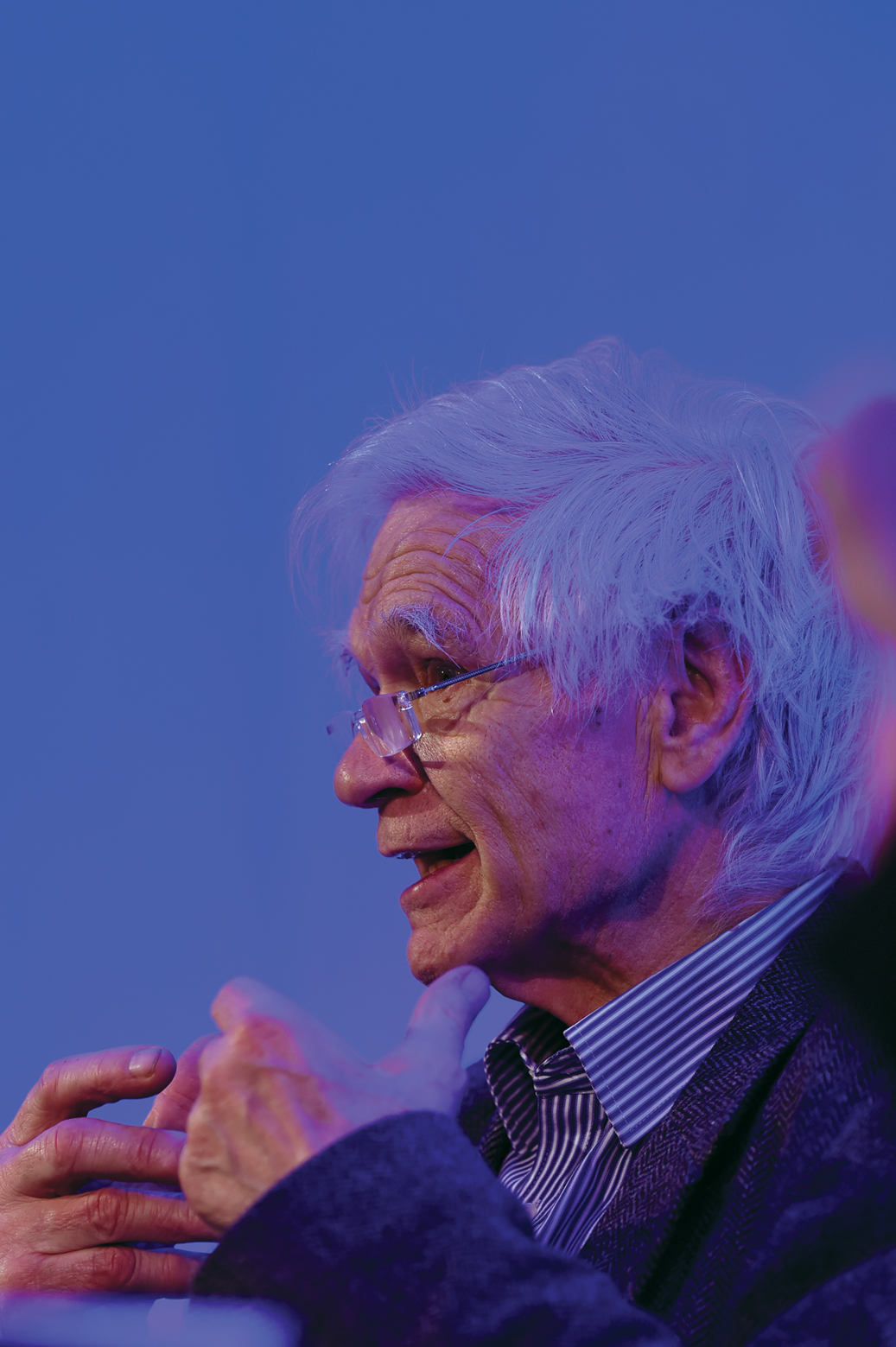 Max Fordham looks back on his 50 years in the industry

CIBSE President John Field said the industry would need to recruit a more diverse and inclusive workforce to deliver better building performance. ‘If there isn’t a performance gap, there is definitely a skills gap,’ he said. ‘We are currently only fishing in about 10% of the [population] pond – and do we need medics to address the issue of wellbeing in buildings?’

In the opening session, Atelier Ten’s Patrick Bellew said smart metering could help to close the performance gap, ‘but the process needs to be there to make sure the knowledge produced by the meters is usable’.

On day two, Neil Lewis and Jonathan Purcell, of Waterman Building Services, explained how the team behind Liverpool’s Everyman Theatre worked together to create the striking, naturally ventilated building.

The project team was motivated by the client’s positive attitude. ‘For them, the theatre is not just a building – it’s a home,’ said Purcell. ‘Developing a building knowing they would have to have it for 30-40 years makes a very motivated client – and that’s infectious for the design team.’

But to test how truly collaborative the team is, tell the architect you want a 16m2 hole in the ceiling, said Purcell. ‘I do not remember the team asking whether something can be done. They only asked: how can we do it?’ 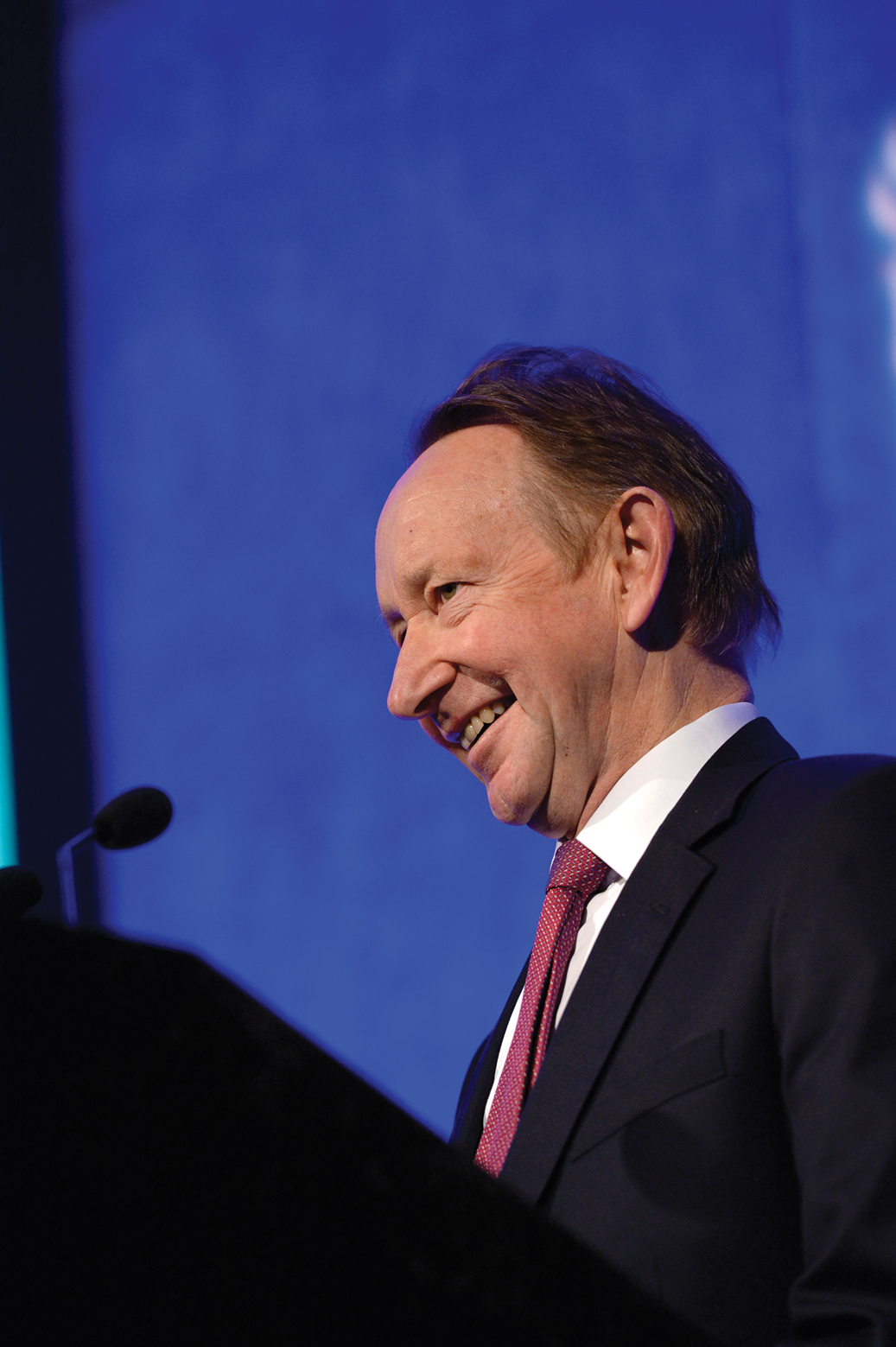 Adapt Low Carbon Group CEO, John French, said a year and a half was spent in design workshops and design development for the University of East Anglia’s Enterprise Centre. ‘Our ethos was “no surprises”. We all worked together as equals and shared information, positive and negative,’ he said.

Ted Pilbeam, building services and sustainability director at VolkerFitzpatrick, gave a presentation on the firm’s CIBSE award-winning training programme, which was rolled out to the 150-strong workforce. The final programme morphed into an interactive event, said Pilbeam, adding: ‘Gone are the days of old-fashioned practical completion – commissioning and environmental testing start when the painter puts down the brush.

‘At handover, the client must be ready to operate the building, which needs to perform to its required function. Without good collaboration that would not happen.’

Environmental adviser at the National Trust, Keith Jones, said there needed to be less focus on new-build properties and more on older building stock – especially as the UK has a very high percentage of pre-1919 housing.

Among the 29,000 properties run by the charity is an 18th-century Welsh mansion, Plas Newydd, that – until recently – used 1,500 litres of oil a day. Jones explained that the trust saved 40% on energy costs simply by explaining to staff how things worked. It also allocated responsibility for mundane – but important – processes such as changing the clock back on the building management system (BMS). 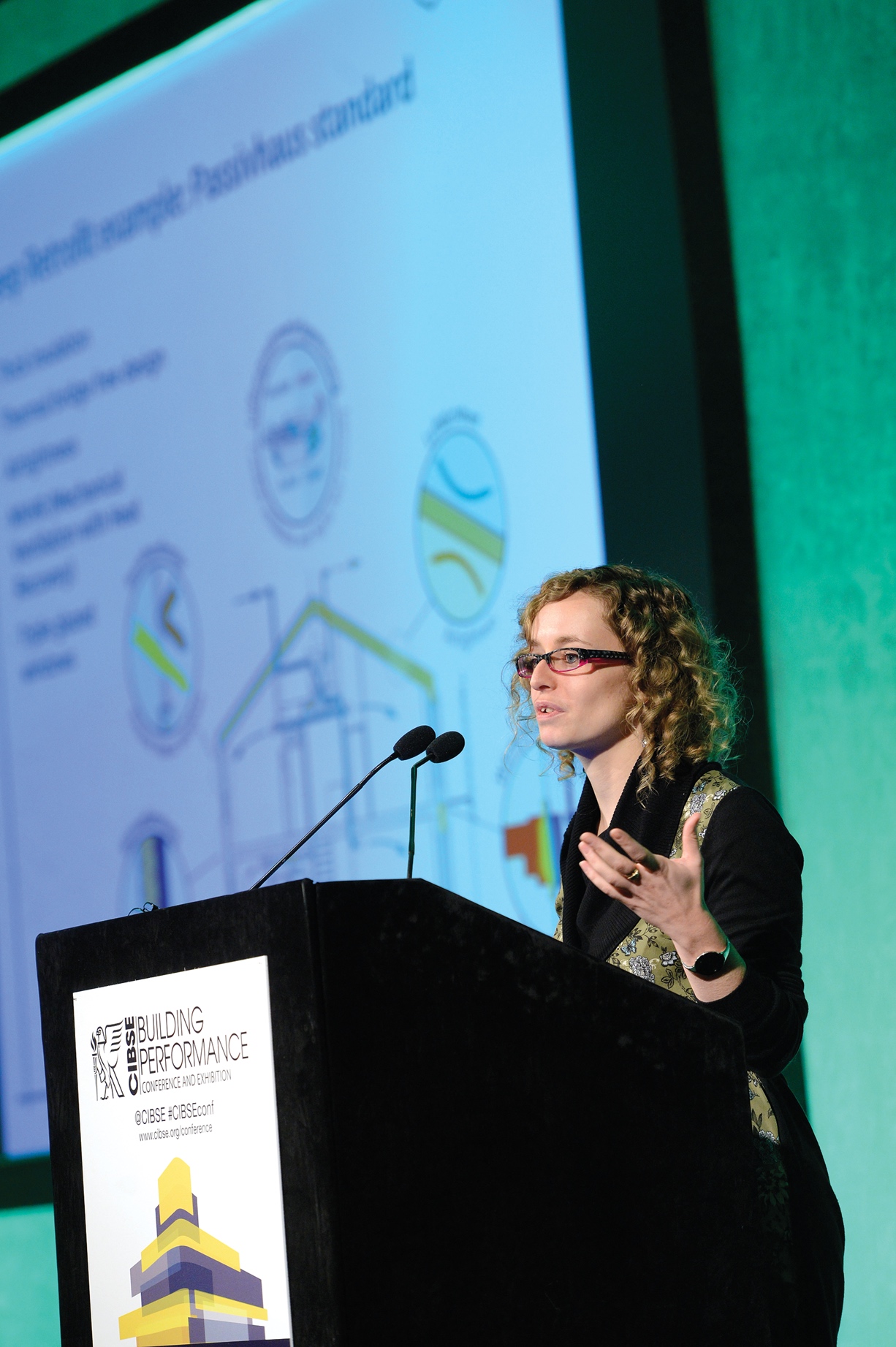 Engaging building users is vital, he added, because a fancy BMS won’t help if someone leaves the back door open. ‘We invested £29,000 in a heating system, and someone invested 50p in a wedge.’ National Trust site managers have a key performance indicator linked to energy consumption of their site, so they are incentivised to lower it, Jones said.

Munish Datta, M&S head of Plan A and facilities management, said the M&S estate is almost 40% more efficient since its sustainability programme started in 2006, with 90% of the savings coming from retrofit.

‘We are still finding low-hanging fruit,’ he said. ‘We need to keep the programme of deep retrofit alive, year on year, and keep appraising the market for innovative products.’

Marine Sanchez, of Enhabit, added that retrofitting is best done once – and done well. ‘The lifetime of our buildings means that what we’re doing right now will impact on how much energy they are going to use in the next 80 years.’ She said carrying out deep retrofits could reduce the global risk of building-related carbon lock-in.

The message from speakers was clear: when designing new – or retrofitting old – think long term. As French pointed out: ‘We need to ensure buildings are net generators of energy, not consumers of energy, and that they are assets in tackling climate change.’

The engineering sector needs to measure building performance in terms of human health and wellbeing – rather than purely through technical data. That was the opinion of several speakers, who urged engineers to consider the impact of buildings on broader social and environmental issues.

‘We are starting to think bigger as an industry,’ said Andy Ford, professor at London South Bank University, who believes the sector’s value to society could be expressed differently. ‘Excess cold is costing the NHS £1bn a year; 2.9 million people live in fuel poverty; and we suffer 15,000 excess winter deaths. That is something we could sort out.’ He called for every building to be at PassivHaus standard by 2050, and for home energy efficiency to be ‘a national infrastructure challenge’.

The industry also has a key role to play in protecting building occupants from the effects of rising air pollution, said Gary Fuller, senior lecturer at King’s College London. On PM2.5 airborne particulates, he said the UK was meeting limits set by the EU, ‘but they are too relaxed’ and not as recommended by the World Health Organization, which says there is no safe limit for this kind of pollutant.

The ability of people to measure air quality and other factors that affect their health is creating a demand for better indoor environments, according to Alan Fogarty of Cundall, which has signed up to the Well Building Standard. To meet the standards, building managers need to be able to reduce the concentration of CO2 in a space to 800ppm and keep ozone and volatile organic compounds (VOCs) at safe levels.