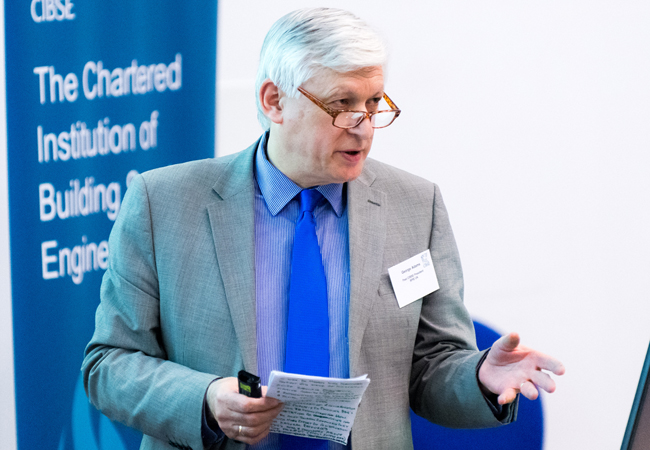 The CIBSE Resilient Cities Group held its first event last month – a seminar at a conference run by the Institute of Energy Futures. ‘Adapting Buildings for Resilient Cities’ was one of four conference streams at the Brunel University event, and was organised in conjunction with Professor Maria Kolokotroni.

The keynote address was given by Nick Winser, chair of Energy Systems Catapult, who said industry could not rely on government to meet the climate change objectives in the Paris Agreement. he added that ‘deploying expensive solutions will not retain political or public support’, and that there was an opportunity to use data.

George Adams (pictured), chair of the Resilient Cities Group, said designers need to take a whole-life approach to construction, and that the specification of reusable systems was necessary to make significant cuts in carbon.

Susie Diamond, partner at Inkling, addressed the issue of overheating in homes, and explained how modelling could predict the metabolism of a building. A methodology was needed to predict, at design stage, if a home will overheat, she said, adding: ‘It should be reliable, cost effective, flexible and easily understandable.’

Rajat Gupta of Oxford Brookes University, discussed how suburbs can be adapted for a changing climate. He said external temperatures could be reduced by managing the microclimate and said retrofitting for climate change should be carried out alongside low carbon refurbishments.

Angus Cunningham, managing director of Scotscape, discussed research from the University of Sheffield on the impact of living walls on internal temperatures. He said establishing a U value for green walls was difficult because there were too many variables.

The urban heat island (UHI) effect was tackled by Kolokotroni and Geoff Levermore, or the University of Manchester. They said UHIs in Manchester and London contributed up to 8 degree C of warming at night, and less during the day, and urged engineers to take the wider built environment into account when designing buildings.

Full details of the presentations are on the Resilient Cities Group website: http://www.cibse.org/networks/groups/resilient-cities