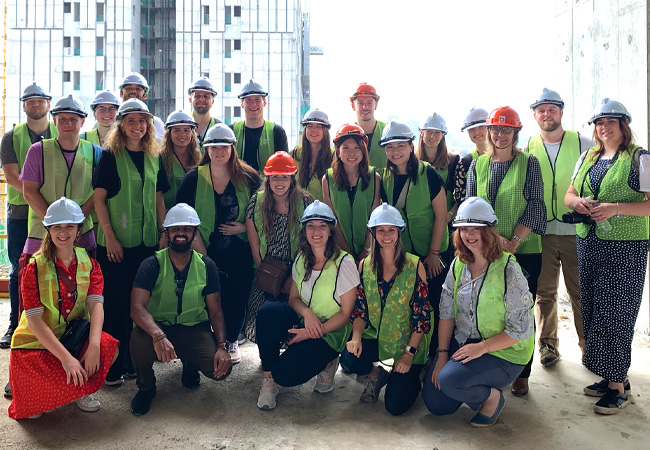 On 11 November 2019, 23 chairs and vice chairs from CIBSE’s Young Engineers Network (YEN) headed to Malaysia for a week of activities to learn about building services in the region.

First port of call was a trip to Putrajaya, where the young engineers learned about the town’s masterplanning by architect Serina Hijjas. The city has 38% designated green space and the plans have spare utility tunnel provisions under the main promenade to allow for future expansion.

The town’s masterplan also has a requirement for educational buildings, and this is where the Heriot-Watt University Malaysia campus has been established. There is 67% green space with several sustainability features.

Located at the edge of Putrajaya Lake, the campus is naturally ventilated, and the breeze coming off the lake enabled the designers to pursue a cross-flow ventilation strategy. Shading facing the lake minimised solar gains.

An arcing green roof rises from the ground floor of the university and extends the length of the building. At around 9,000m2, it offers an area for students to gather, and was positioned so any buildings overlooking the campus would only see the green of the roof as they looked towards the lake. 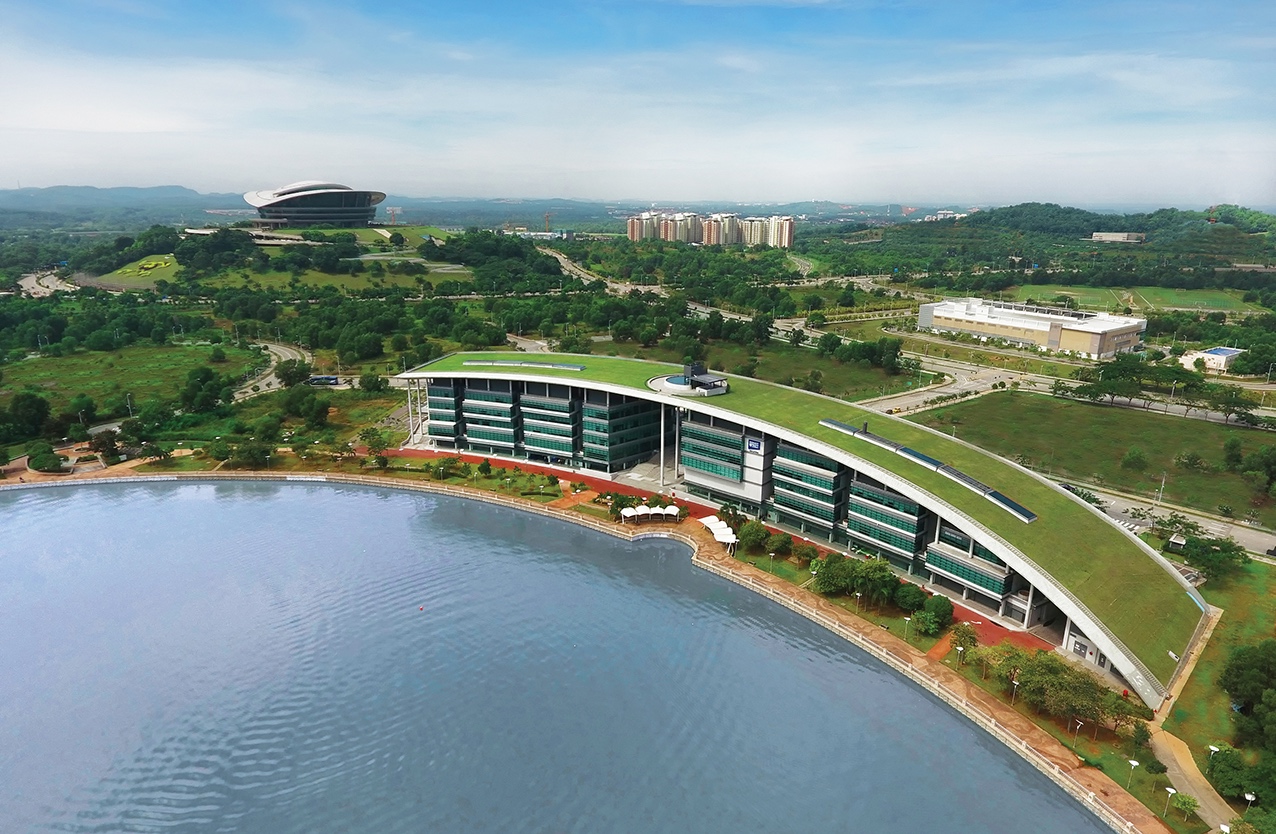 The presentation was followed by a tour of the campus to see these systems in operation, explore the plantrooms and walk across the massive green roof.

The mix of nature and technology on the campus typifies the design philosophy of the Putrajaya masterplan. There was further evidence of this in the group’s next destination, the Diamond Building, which is the home of Suruhanjaya Tenaga, the Malaysian Energy Commission.

Here, the head of facilities management told the group about the history of the organisation, the legislation it had passed and the energy efficiency measures used in its building.

The building optimises daylight from the dome at the top of the building, which serves the central atrium space, to the diamond shape of the building itself where the external glazing is sloped downwards with low emissivity level glazing to minimise the risk of high solar gain.

Other measures include PVs on the sloping roof, trees planted on the street to shade the entrance and slab cooling overnight.

Next day began with a tour of the famous Petronas Twin Towers. Starting out on the skybridge, which links the two towers 170 metres above ground, there was the opportunity to see the staggered perforated ductwork that ventilates internal spaces.

Even though the double-storey bridge is not attached to the building and has a nine-inch expansion gap to account for the towers’ movement, it was noted by YEN members that the ventilation had been designed so each tower served half the bridge.

The bird’s eye-view of the city allowed the group to see other services considerations such as PVs that had been placed in patterns to minimise the visual impacts for overlooking buildings. 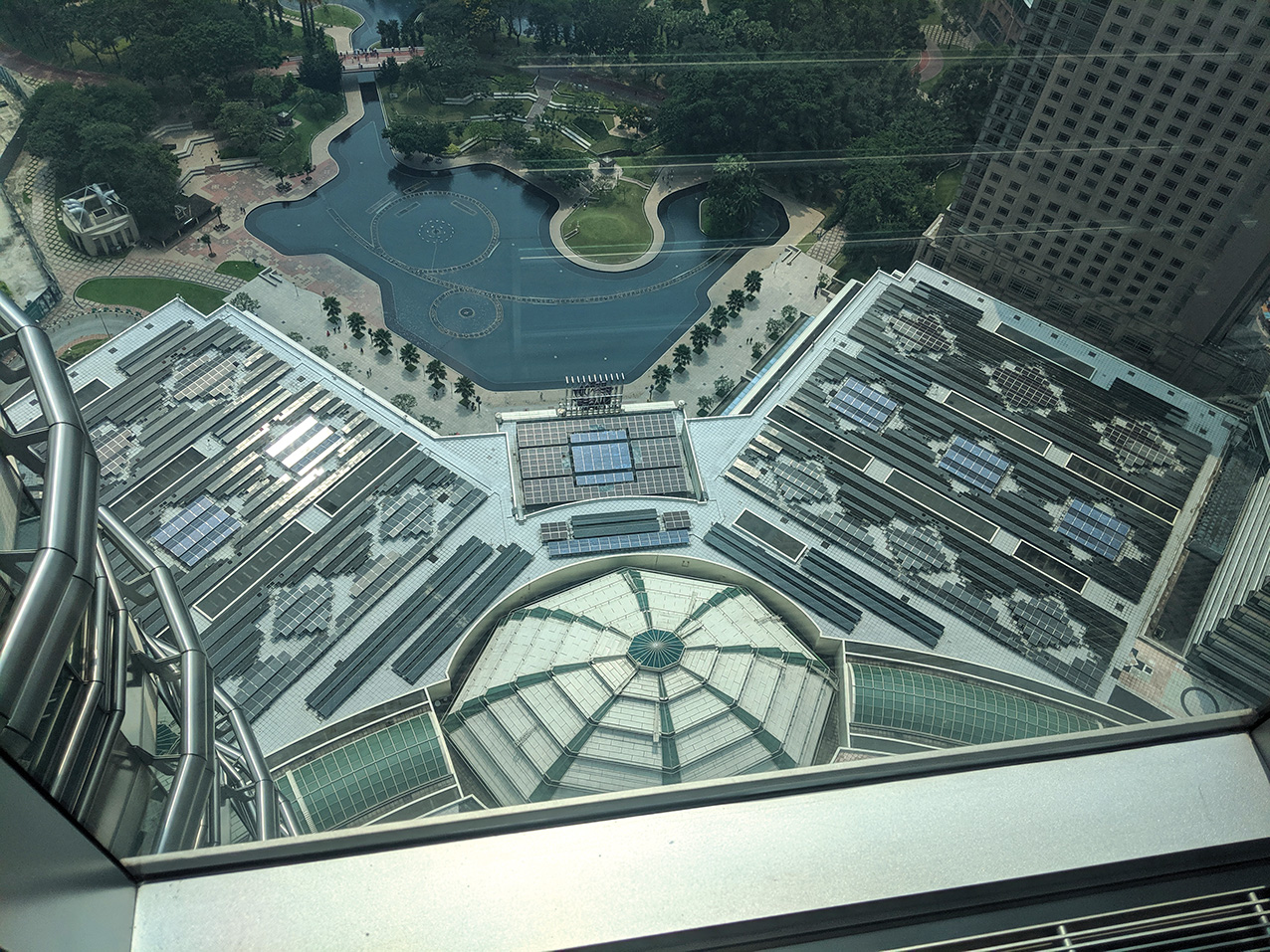 Patterns of PVs viewable from the Petronas Towers

Next on the agenda was a visit to the new Bukit Bintang City Centre (BBCC) development. YEN had the opportunity to listen to the developers’ approach to the huge mixed-use project, including their consideration of services, along with presentations from the M&E engineers involved in the design.

During a tour of the site, the group saw construction of the stage area in the entertainment hub and a mockup of an office section. In the evening, they attended a dinner with ASHRAE YEA Malaysia, where they had the chance to network and hear the challenges of working in a different country.

The next day, they headed to Singapore. Starting at the Gardens by the Bay, the group had an opportunity to see the sky trees, which house PVs for powering lighting, and a collection of rainwater and irrigation displays within the development (see Climate creation, August 2012 CIBSE Journal).

Inside the domes, they experienced the temperature-conditioning methods within the spaces, which included fabric cooling to all hard flooring, active shading on the façade, direct evaporative humidification (or misting) and so much more, that it prompted a game of ‘spot the services’.

A boat tour followed with local engineers who explained the buildings and local industry visible from the water, before visiting the Urban Redevelopment Authority (URA) Centre.

The URA Centre had a number of features that celebrated the built environment in Singapore, such as the island-wide model, which had projections showing distribution routes for various transport modes, along with utilities and all the other planning considerations made throughout the city.

We also visited the Central Area model, which is the largest architectural model of its kind and hosts models of all developments within the city. Areas still in planning were presented as wooden structures, and the model is constantly updated to ensure it reflects the latest cityscape.

To cap off the week, the regional YEN chairs’ meeting was held to discuss what was happening within their regions, and learned from each other. The activities ensured the YEN chairs and vice-chairs could bring back a great deal of technical knowledge and ideas to improve their local activities further.