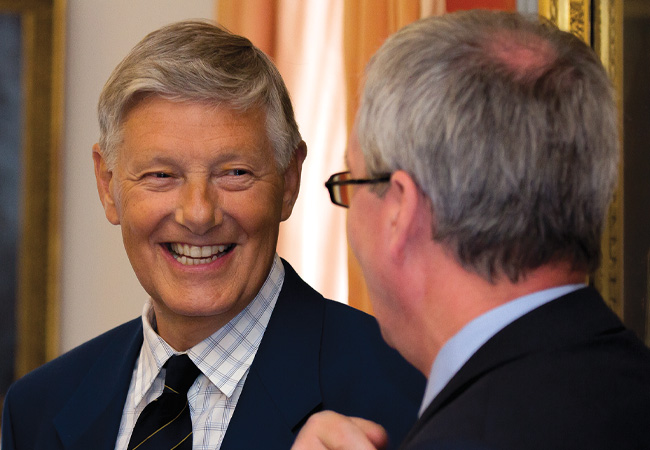 Industry figures gathered at St Giles’ Church, Ashtead, Surrey, on 22 May, to celebrate the life and work of Graham Manly OBE FCIBSE.

A widely respected and hugely popular figure, Graham served as President of CIBSE and the HVCA (now Besa), and as chair of BSRIA. He joined the industry in 1962, studying for a HND in environmental engineering at the National College of Heating, Ventilating, Refrigeration and Fan Engineering. He joined J Jeffreys, later part of Balfour Beatty, and became senior design engineer.

Having joined CIBSE in 1965, he served as President in 2004 – presiding over governance reforms to create the current Board of Trustees – and later served as Treasurer. He oversaw works to the Balham offices, and in ‘retirement’ served as a STEM ambassador and Trustee of CIBSE Benevolent Fund.

Former HVCA chief executive Robert Higgs OBE said: ‘It was not only that Graham’s contribution to the industry was so immense, it is as much his style, personality and generosity of spirit that will be remembered. He never said ‘no’ when asked for help.’

Graham’s service to CIBSE and the wider industry was recognised in 2013 with a CIBSE Gold Medal. He was made an OBE in 2012 for services to building engineering and, in 2018, received an honorary doctorate from London South Bank University, where he was a visiting professor.

The thanksgiving was a celebration of Graham’s life and of his quiet Christian faith. The gathering afterwards in the Dell Centre, the two-storey ‘church hall’ that he helped to create, epitomised his life in the industry. It brought together colleagues and friends from all parts of the sector, just as Graham did in so many ways in more than 50 years.