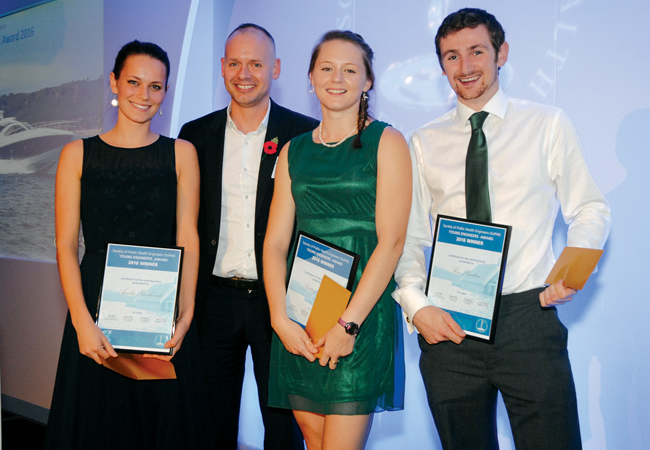 The project – designed by Amelia Paszkowski, Brittany Harris and Ross Boulton, from Buro Happold Engineering – consists of a simple plastic and rubber barrier that can be put up by one person in 45 minutes to protect a 10x6m property from 0.5m of flood water.

The design costs four times less than current systems, weighs 40 times less, and can be stored, erected and taken down by the homeowner, without having to rely on the input and resources of local authorities.

SoPHE challenged award entrants to design a system to protect a bungalow from flooding – a problem that is faced by two million UK homes every year and costs the economy more than £1.4bn.

The system had to cost less than £500 and be small enough for the average homeowner to store, as well as be simple for elderly homeowners to set up.

In addition to meeting the design specifications, the winning team members were commended for their commitment to sustainability, both in terms of materials and the community impact.

All the components of the system are re-usable, recycled and biodegradable, while the ease with which it can be set up and managed encourages communities to be self-reliant and cooperative in deploying flood defences.

Edward Clarke, chair of the SoPHE education committee, said: ‘This competition gives young engineers a hands-on chance to create a project that directly impacts the health of our society, and tackles some of the more pressing issues that affect people in the communities around them.

‘Engineering makes the modern world work, and demonstrating that is key to attracting the next generation of young minds.’

Rachael Porter, from Hoare Lea, received a high commendation at the awards ceremony, which was held during the 13th SoPHE anniversary dinner in November. The judges thought her design demonstrated an excellent appreciation of the brief and created an innovative solution.

All the finalists received an afternoon for two on a Sunseeker motor yacht.

John Griggs, of JPJN Partners, was awarded an Honorary Fellowship of the Society at the event, in recognition of his contribution to the industry. SoPHE was also able to donate £1,500, raised during the evening, to the charity Engineers Without Borders UK.