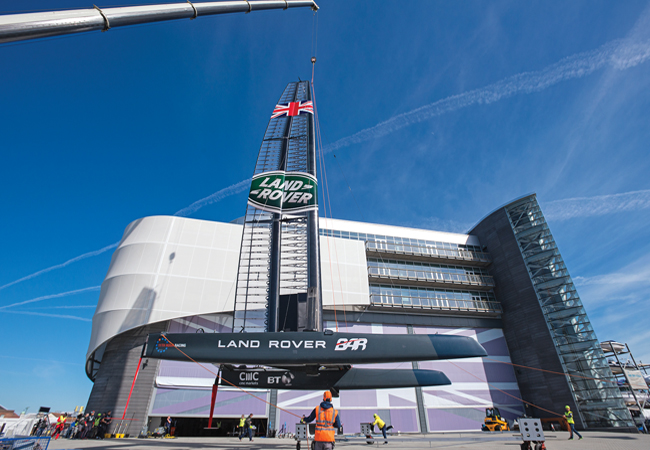 The United Kingdom has excelled at sport in recent years, including stirring success at the Rio Olympics, where Team GB finished second in the medal table, ahead of sporting superpowers such as Germany and China.

Some of Britain’s greatest modern-day achievements have come in the Olympic regatta – and with two golds and a silver in Brazil this summer, the UK was again the leading sailing nation at the games. This was despite not having the services of Sir Ben Ainslie, the most successful sailor in Olympic history, who won four consecutive gold medals up to and including 2012.

Despite its recent achievements on the water, one notable trophy has been beyond the reach of British sailing: the America’s Cup. Since the first race in 1851, no British team has ever won it. That could change in 2017, when a team formed by Ainslie will be among those challenging the defending champions, Oracle Team USA.

Land Rover BAR (Ben Ainslie Racing) is based in Portsmouth, and has its headquarters in a prominent new building on the waterfront.

Its connection with sailing can be seen in the façade; a large fabric wrap partially covers all four sides of the building. It acts as a solar shade, as well as a billowy metaphor for the boat research and development going on inside.

The headquarters are the focal point for the design, construction and development of the team’s boats, as well as for the crew’s sports science and fitness facilities. Its set-up has been likened to that of a Formula 1 team; it houses the team’s design, commercial, event management, sustainability, marketing and PR teams, who will closely monitor the progress of the America’s Cup challenge in Bermuda next year. 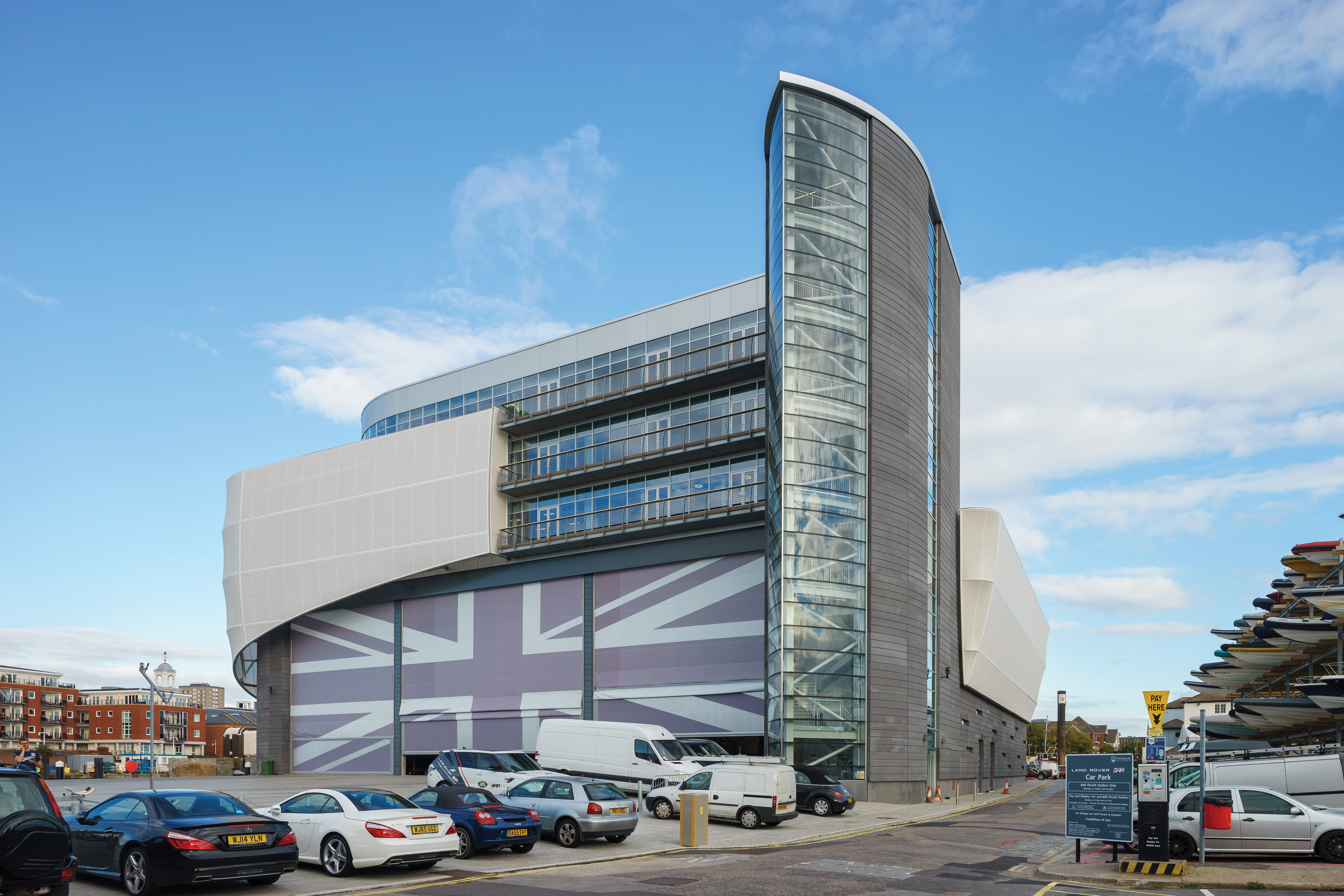 On the ground floor, behind the large Union Jack doors, is the workshop, where the boats are assembled, stored and maintened. Above are offices, a gym, meeting rooms and a corporate area. There is a central lightwell rising through the building, which helps to bring natural light into the building, and naturally ventilates the workshop. (See panel, ‘Inside Land Rover BAR’s headquarters’).

As well as preparing an assault on one of the oldest trophies in international sport, Land Rover BAR is dedicated to creating a sustainable legacy for sailing (see panel ‘Sustainable features’), and sustainability officer Susie Tomson ensures that the environment is central to strategy decisions. 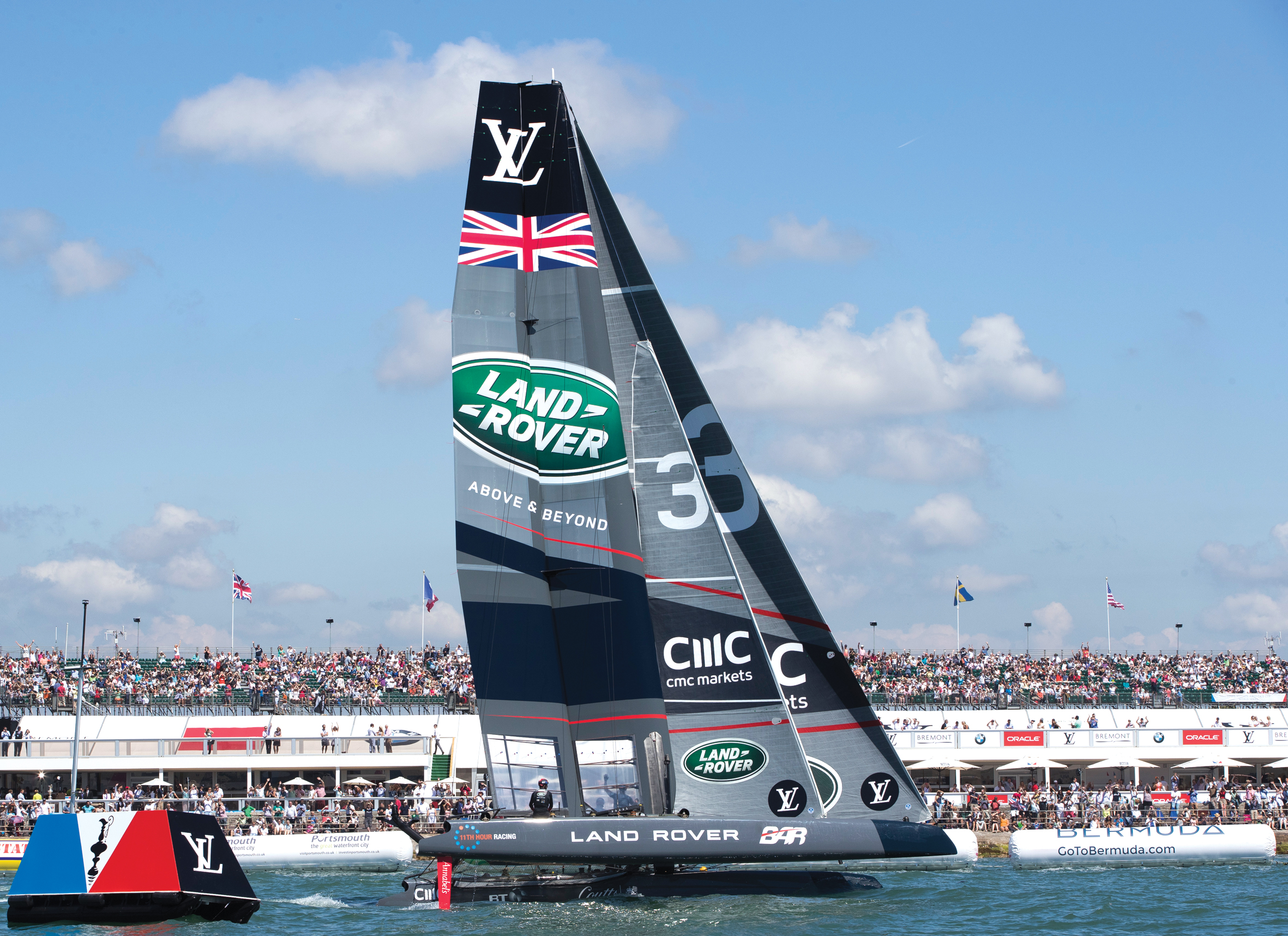 ‘Sustainability was embedded right from the start. We could have built a cheaper building, but we wanted a long-term option, with design, innovation and sustainability wrapped into one,’ she says.

The race to the start line

This presented a challenge for the project team because the HQ had to be designed and built in less than half the time expected for this type of building.

‘For the boat to be competitive in the first America’s Cup World Series event in 2015, we had to be operational within 18 months,’ says Tomson.

Achieving this meant bringing the design team together at the start, and using building information modelling (BIM) to coordinate the design. ‘Collaboration was one of the strongest stories on this project,’ says Tomson. ‘Right from the start, we had to sit down together.’

Phil Ward, associate at Couch Perry Wilkes, said BIM was critical in meeting the tight schedules, and it forced the
team to spend more time getting the plans right at the design stage. ‘We just used it for design and coordination, rather than scheduling.’

Another problem was meeting the aspiration for a sustainable building before all the money had been raised for the America’s Cup challenge.

Sustainability was embedded from the start. We could have built a cheaper building but wanted a long-term option, with design, innovation and sustainability in one

‘We did an assessment of how we could get to zero carbon, and we decided to do it in stages,’ says Ward. ‘We had already specified good U values and low air permeability. Further reductions were achieved by specifying efficient equipment. Solar PV on the different roofs further reduced carbon emissions.’

The Land Rover BAR HQ was required under planning to achieve the Breeam Excellent standard, and has many environmental features, including:

There are facilities to allow the future installation of technologies to reduce emissions even further. These include connection points, ventilation louvres, a blanked-off flue to the roof and a gas connection to accept a CHP unit. There are also connection points and space allocated to install seawater cooling equipment to reduce the chiller load at certain times of the year. 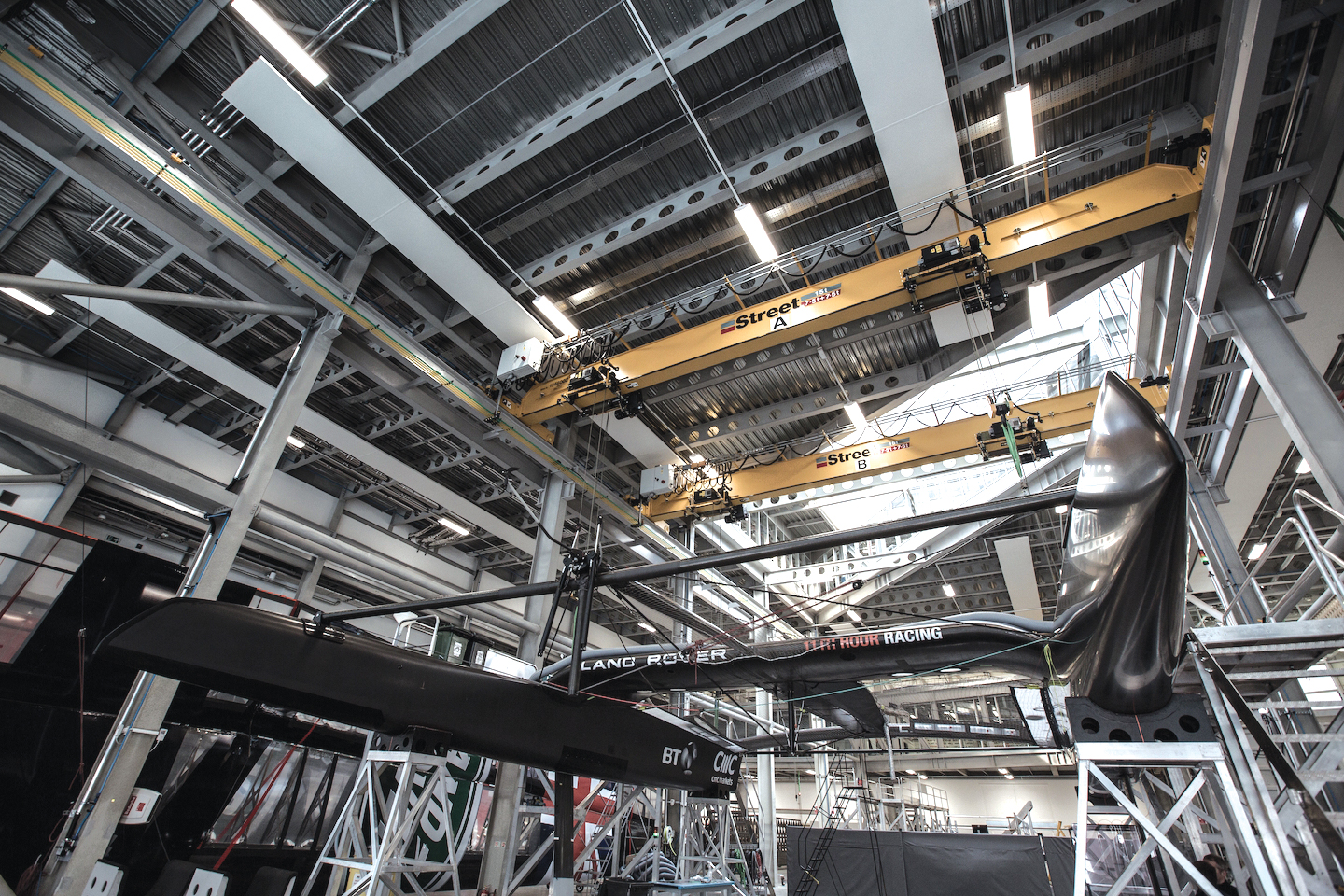 Fan coil units that are easy to reposition were specified; on the Tech Deck – the team’s education space – they have already been moved by the M&E subcontractor to meet the elvolving requirements.

Internal environments differ across the building. The ground floor houses the workshop, where Land Rover BAR is completing its boat for the America’s Cup challenge – it will be launched in early 2017. The area is heated by radiant panels to a temperature of 16°C.

The workers and sailors like conditions to be invigorating, says Ward. ‘At one point they didn’t want any heating in the workshop and, in the gym, they wanted lots of fresh air to assist with their rigorous training regime,’ he says.

The worker’s hand-on, technical approach meant they could pursue a simple natural ventilation strategy in the workshop, and be trusted to open and close the main doors to adjust internal temperatures, humidity and air quality.

Ward says the team members used trial and error to work out how far they had to open the doors to achieve optimum temperatures.

An atrium runs from the workshop to an ETFE roof, where air is exhausted through glazed louvres.

The fabric wrap – as well as defining the appearance of the building – also helps condition the building. It minimises solar gains in the interior and traps warm air between the fabric and the building envelope, helping to reduce the heating requirements in the building.

‘It shelters the building from the elements,’ says Ward. ‘It provides solar shading, which means we could relax the g-values (solar energy transmittance) of the glazing. We used integrated modelling software to assess the benefit of providing the wrap and a significant reduction in cooling and heating loads was achieved.’

Thermal imaging showed how warm air was being trapped between the fabric and windows, which helped to reduce heating requirements in the winter.

The designers paid special attention to the thermal performance of the envelope. Low U values of 0.15W.m-1.K-1 were specified for walls, floors and the roof, and pressure testing showed air permeability was 2.6m3/m2·h@50Pa, which compared favourably with the 3m3/m2·h@50Pa that had been used in the model. 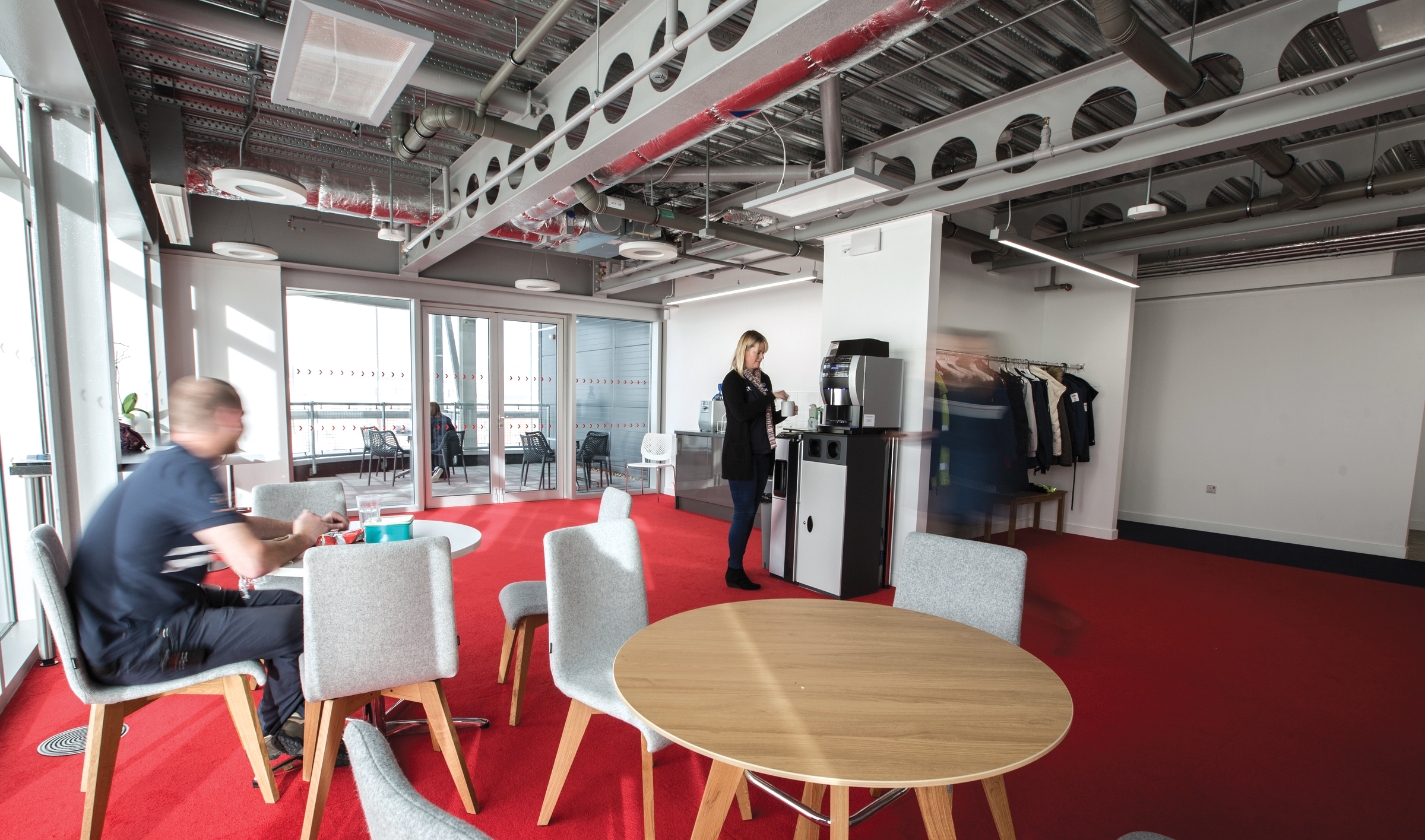 The designers tried to use thermal mass as much as possible for passive cooling, but the speed of the build did not allow the specification of poured concrete slabs for the steel-frame building. The compromise was to use concrete floors supported by a hollow rib flooring system, which is much quicker to install with exposed slabs.

Noise reduction was also a challenge. The VIP area is on the roof, and special guests did not want to be disturbed by noisy HVAC equipment while they watched the sailing. So the chiller has been positioned in the mezzanine plantroom, while the dry air cooler on the roof has been specified with the lowest possible noise rating.

Post-occupancy evaluation of the building is supported by the University of Portsmouth. Ward says that it was very difficult to make predictions about energy use because the building has so many uses – workshop, restaurant, bar, offices, gym and so on – and it was difficult to know how often areas such as the corporate hospitality would be used.

The success of the building is an auspicious sign for Land Rover BAR as the America’s Cup challenge nears its completion. If the cooperation and technical skills demonstrated in the building delivery is replicated by the sailors in Bermuda, a British team might just be returning to Portsmouth with the America’s Cup – for the first time in 166 years.

‘The builders, M&E teams and designers all pulled in the same direction and– as we worked collaboratively – we were able to move the design forward really quickly,’ says Ward. ‘This building proves that, with a good team, you can do anything’. CJ

Opening the large Union Jack doors reveals the 12m-high workshop and the heart of the boat-assembly, maintenance and research operation. There are also workshops  in containers, which will be shipped out to Bermuda, as well as a paint shop and bike store (staff are encouraged to cycle).

On a mezzanine level is a gym, meeting room for the crew, changing area, and showers/toilets. Above that are offices for design and operation staff, and a large open area for meetings. There is a central lightwell rising through the building from the workshop, which helps bring natural light in, as well as allowing the workshop to be naturally ventilated.

One half of a floor is taken up with a Tech Deck, which is designed to ignite enthusiasm for STEM subjects among 11-16-year-olds. This level features a test boat and interactive games, that allow users to experience sailing and try out some of the technologies used by the team.

There is also a canteen and kitchen area and a corporate hospitality VIP area at the top of the building, which offers 360 degree views across the Solent.