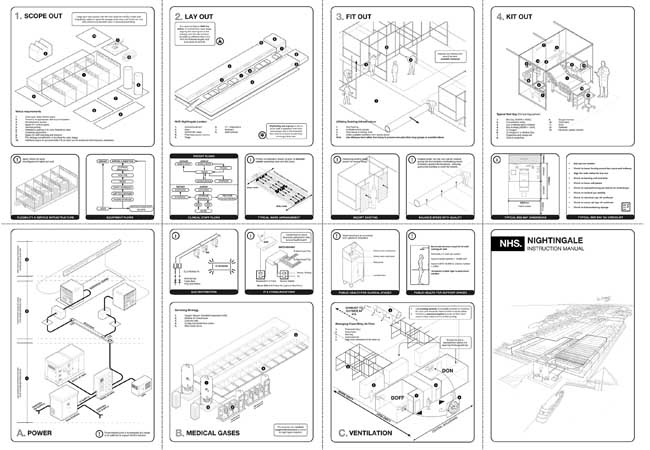 The NHS Nightingale hospital in London was officially opened today by Prince Charles via video link.

It took nine days to convert the ExCeL centre in Docklands into a sophisticated hospital equipped to care for those most severely affected by the coronavirus.

The two exhibition halls now contain 80 wards, which could eventually house up to 4,000 beds equipped with oxygen and ventilators.

Building services engineers from BDP and The Richard Stephens Partnership (RSP) were behind the services strategy for NHS Nightingale, which is designed to accommodate 16,000 staff.

BDP and The RSP worked under the main contractor CFES, alongside clinicians, consultants, contractors, the ExCeL FM team and the British Army.

Service corridors and bedheads were constructed using ExCeL’s exhibition stands, while the existing electrical system was expanded and a new, large-scale gas system installed to provide patients with oxygen.

BDP has released an instruction manual for NHS Nightingale, which shows the fit-out strategies and processes for services including the ventilation. It is designed to be shared with others who might be working on other field hospitals.

We asked the two lead engineers at BDP and The RSP what was involved in creating one of the world’s biggest hospitals in less than two weeks.

James Hepburn is a principal building services engineer at BDP, while Stephen Cowlin is director at The Richard Stephens Partnership.

How did BDP and The RSP become involved in the project?
BDP prepared a high-level paper proposing the construction of intensive care unit (ICU) barns in exhibition/convention centres. This followed discussions with Matthew Shaw, CEO at Great Ormond Street Hospital. He was leading the adult ICU response for north London and described the lack of ICU beds.

When the scale of the shortfall across London became evident, the ExCeL centre was the obvious choice. Shaw was working closely with the Royal Free Hospital and The RSP, which had recently completed the conversion of 19 positive pressure isolation rooms to negative pressure for the Royal Free as a COVID-19 measure. Both BDP and The RSP dropped everything and mobilised to assist.

BDP architects undertook the role of lead consultant, coordinating the developing design proposals. Engineers from The RSP, ETA Projects and BDP worked collaboratively with specialists and contractors to design something that was deliverable within the timescales. Hoare Lea has undertaken a due diligence review of the proposals and assisted with the commissioning process.

How was work coordinated between you and the other project team members?
Everybody just mucked in – if a gap was identified, someone tried to fill it. Different work streams were under pressure at different times because of procurement pressure or construction demands.

With everyone working flat out over long days, if you could see someone had too much on their plate, you would try and help them out. Roles were freeform and flexible; it was just about getting the job done.

What were the biggest challenges?
The speed of the project was insane. Decisions had to be made quickly to allow construction to progress. Design proposals had to be sufficiently flexible to accommodate the developing design of specialist systems such as for the medical gases.

With such a short programme, procurement was an issue and, where possible, we made the most of the ExCeL centre’s infrastructure and temporary systems, designed around what could be sourced and implemented within the very short amount of time available.

Another issue has been providing resilience to the electrical power to the building. This has involved the addition of uninterruptible power supply (UPS) and LV standby generators to supplement the existing infrastructure, with the key derogation being that isolated power supply (IPS) is not provided.

Could you describe how fire risks were mitigated particularly with the large volume of medical gases involved?
We were lucky enough to have the Royal Free Hospital fire consultant embedded within the team from the start of the project. He immediately set to work understanding the fire strategy of the existing building and modifying it to suit the new function.

As the design proposal developed and risks were identified, mitigations were agreed. Constant consultation with the London Fire Brigade was also undertaken.

What was the ventilation strategy – was ExCeL’s existing ventilation system adequate?
The ventilation installation in the exhibition spaces at the ExCeL centre is capable of delivering around two air changes an hour. When you consider the spaces are 10 metres high, this is a significant amount of fresh air.

What did you have to change?
The system was put in full fresh air mode, with the recirculated air inlet dampers physically blanked off, and a validation exercise was undertaken to ensure actual flow rates tallied with what the record documentation indicated.

All filters were changed, the plant was fully inspected by the engineering team with maintenance issues raised, and the BMS was modified to suit the proposed operation.

Since the AHUs are usually only accessed for maintenance in between exhibitions and from scissor lifts, it is being reviewed as to whether access from the roof can be provided through the large exhaust air penthouse- style louvres.

This will enable access to the gantries to maintain the plant without having to access the treatment floor space.

How do air change rates compare to regular hospital wards and isolation rooms?
The HTM would require an air change rate of 6 ACH in a general ward and 10 ACH in a critical care area. While the air change rate in the ICU barns at ExCeL falls short of this, the high ceiling and huge volume of space means that the supply air flow rates are similar to that delivered to a general ward with a standard ceiling height.

Careful consideration has also been afforded to the pressure regimes through consultation with the infection prevention team.

The halls usually operate under positive pressure with air passing to the ExCeL’s boulevard. However, on advice from infection control, below a height of 2.5m, the perimeter to the boulevard support space (which is considered ‘clean’) is to be sealed, with air passing through the existing exhaust louvres and through leakage to outside on the ‘dirty’ corridor.

Dedicated ‘don/doff areas’ [where personal protection equipment is put on/removed] have been formed where wall fans have been introduced alongside associated pressure relief dampers to give ‘positive pressure’ to the don areas and ‘negative pressure’ to the doff areas, in relation to the exhibition halls. This is achieved through a simple arrangement whereby wall fans installed take air from the boulevard, and to the exhibition hall, respectively.

Has there been consideration of the risk around plumbing and drainage systems?
Plumbing is basic, connection back to the ExCeL infrastructure and serving wash handbasins on the nurses’ stations.

With potential heat gains in the summer, what assessment did you do on loads, and how do you deal with them?
The AHUs all have cooling coils linked to chillers that can temper the supply air temperatures; the heat gains of the ICU function will be less than the other uses of the ExCeL centre.

Finally, how replicable are these designs both in this country and overseas?
The design proposals are replicable. BDP has produced an information poster that visually sets out the strategies adopted at NHS Nightingale London. While not all solutions will translate to other venues, we were keen to share our learning and disseminate information across the UK and globally.