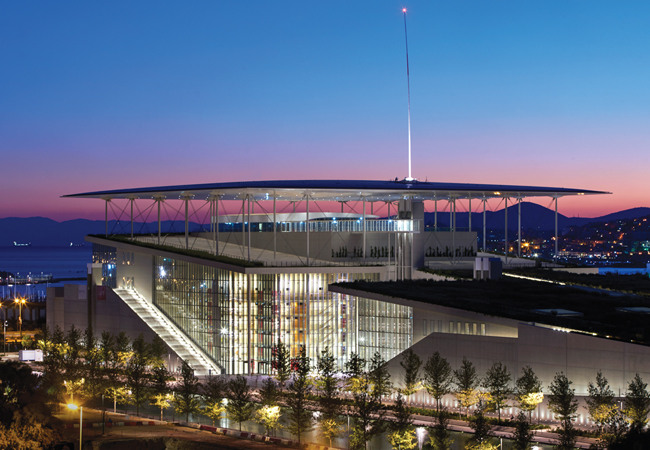 Greece has had more than its share of economic turmoil in recent years, with austerity measures prompting popular protests in the summer of 2011. At the same time in Athens, plans for the Stavros Niarchos Foundation Cultural Center were being unveiled, representing an investment in the country’s future and offering a beacon of hope and optimism in otherwise uncertain times.

Designed by architect Renzo Piano Building Workshop (RPBW) – and privately funded by the Stavros Niarchos Foundation – the €566m (£500m) cultural centre is three projects in one: a 28,000m2 opera house, a 22,000m2 library, and 170,000m2 park. The design team was international, but made extensive use of local labour and supply chains, and more than 2,000 people were employed on the project.

The centre offers world-class facilities and is home to the Greek National Opera and the National Library of Greece. In addition, the library includes a public lending facility, a library for youth and children, a business centre, exhibition space, and facilities for the storage and preservation of rare books and manuscripts. The park, with views of the sea and the Acropolis, is a great space for a stroll, but it also hosts outdoor performances, while the centre has a flexible second performance space and a dance school. The MEP design had to suit all of these various needs.

Sustainability was extremely important to the client, and defined the approach to the design brief. Environmental sustainability noticeably influenced the building’s form, architecture and engineering, exemplified by the vast 100m x 100m photovoltaic (PV) canopy that stands tall above the building.

Arup guided and collaborated with the client and design team to agree objectives and targets. It then produced a strategy that captured the project’s ambitions for carbon emissions, energy consumption, water use, materials, climate-change adaptability, and sustainability in operation. These principles were revisited regularly during the design phase. It was agreed to target Leed Excellent; in the end, the centre attained Leed Platinum, the first building in Greece to do so.

Performance venues can be energy-hungry, so energy consumption was a key consideration. Arup’s approach had three stages: passive design to reduce demand; energy-efficient engineering systems; and the use of renewables once demand had been reduced. 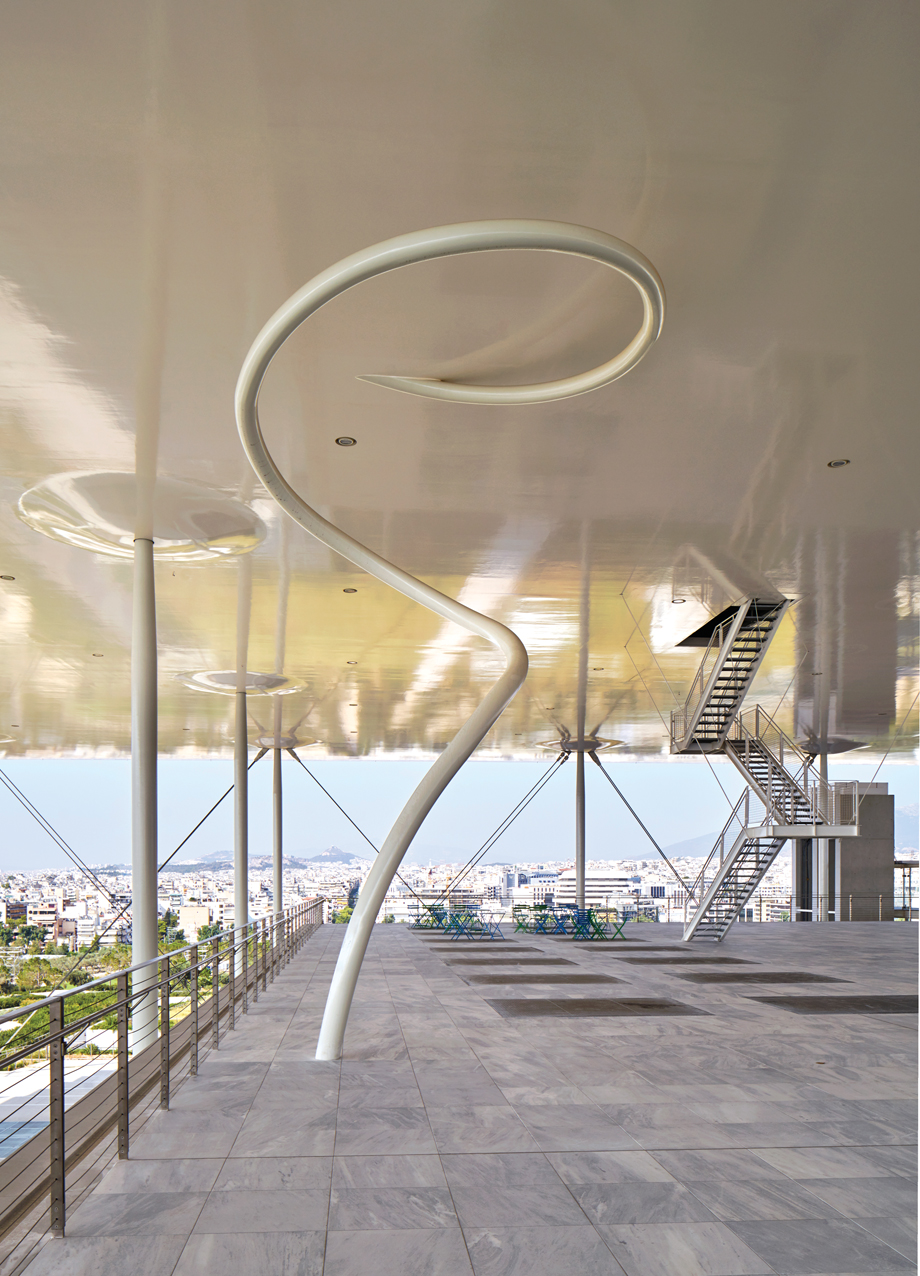 The relationship between the park and the buildings is unusual. A normal approach might be to situate the opera house, library and car park within the park; instead, RPBW located the buildings at one end of the site, nearest the sea. The park was landscaped with a vast, gentle, man-made slope, which starts at street level and has its highest point on top of the buildings. Visitors can walk up the tree-lined slope to the green roof of the buildings. The highest point is set by the flytower, which extends 32m above the opera-house stage and is used to withdraw and store scenery.

As a result, the building is semi-buried, so its fabric is naturally well insulated. A U value of 0.25W/m2K was targeted for the green roof, and the final performance was better. Targets for the building fabric’s thermal performance also exceeded ‘Kenak’ requirements – Greece’s equivalent of Part L in England and Wales.

The library incorporates skylights – set into the green roof – with horizontal external shades featuring blades profiled to cut off direct sun but maximise diffuse daylight penetration. In the opera house, the auditorium, stages and much of the back-of-house facilities do not require daylight, so these are in the middle of the building, allowing rehearsal rooms, changing rooms and offices to be located on the perimeter.

Where feasible, the spaces close to the façade – which is subject to the uncontrollable variations of infiltration and a transient population – are those that can accept a wider range of temperatures. Spaces requiring close control, such as the manuscript storage facility, are deep within the building; a range of intermediate spaces and tolerances sit between the extremes. Conceptually, the building is layered like an onion.

Most of the external façades look onto service roads cut into the landscape, and incorporate punched windows with high-performing glass for minimal solar gain and good daylight. This is an important consideration for performers who spend most of their time in darkened rehearsal rooms and on stages, as well as a means to reduce lighting energy. However, solar gain is still limited because the façades are mostly opaque. Further shade is provided by the retaining walls opposite the façade, which support the man-made park slope and a monolithic, free-standing ‘cliff’ wall facing the sea.

The impressively tall, glazed façades of the public foyers are protected from the heat of the Greek sun by motorised, retractable, external fabric blinds. The glazing’s solar and thermal performance – and the weave of the blind fabric – were chosen so that, when the blinds are deployed in strong sunlight, the light transmission is still sufficient to achieve a light, airy environment. The blinds operate under a KNX control protocol, which monitors and responds to the sun’s position and intensity, and prioritises limiting solar gain and maximising daylight. After dark, the blinds retract fully to expose the curved back wall of the auditorium and the vast wall of books in the library foyer.

Lighting has a dual impact on a building’s energy consumption, because of electricity use and cooling energy to address heat gains, so special attention was paid to the cultural centre’s architectural lighting. Each space had agreed lighting power limits, while all of the architectural light fittings in the building and the park used low-energy LED technology – including some bespoke fittings developed for Renzo Piano by manufacturer iGuzzini.

The heating, ventilation and air conditioning (HVAC) strategy was tailored to each of the building’s myriad functions. An opera house is much more than just the auditorium, stage, foyers and bars; there are dressing rooms, musicians’ and dancers’ rehearsal spaces, scenery and costume workshops, administration spaces, industrial scenery assembly rooms, VIP lounges, recording studios, catering facilities and much more. Even the library has a large datacentre and archive storage, plus restoration workshops, reading rooms, and storage for rare and fragile manuscripts and photographs.

To function efficiently, each type of space has its own HVAC system controlling temperature, humidity level, acoustic limits, air cleanliness, hours of use and tolerances. There are 44 main air handling units, and several smaller systems, all chosen to meet the demands of the spaces they serve resource-efficiently. CO2 monitoring means the ventilation systems only provide as much outside air as is needed by occupants.

The main auditorium has exacting acoustic requirements: background noise had to achieve preferred noise criterion (PNC) 15. This required careful design of the HVAC system, with quiet fans and vibration isolation, and three layers of acoustic attenuation: plantroom; at the point of entering the auditorium; and at each balcony branch. Low-frequency fan noise was reduced by passing the air through a large, acoustically lined plenum. Regenerated noise from airflow has to be avoided, so very low duct velocities are maintained and the number of in-duct components has been minimised. As a result, the external static pressure drop and corresponding fan energy is low, even though the total auditorium airflow is 15m3 per s.

Theatre lighting and equipment is notorious for high electrical demands and large heat gains, which place an energy burden on the auditorium’s air conditioning. Certainly, the functional demands of the main auditorium’s theatre lighting could not be achieved with today’s LED technology so Arup and venue consultant Theatre Projects worked closely to minimise the energy demands of the lighting and equipment – and its impact on the HVAC design – considering diversity in use over a three-hour period and a 15-minute period, to refine the plant sizing.

The space is cooled by displacement ventilation, with pleasantly cool air supplied via floor grilles, drawing the heat from the audience and extracting at ceiling level. Stratified ventilation means the audience feels comfortable, even though the top of the auditorium could reach 28°C or more because of the theatre-lighting heat gains. A ventilation design that mixed the air would use much more energy.

The datacentre in the library has a high heat load of 1,000W/m2 and contains sensitive IT equipment. When considering the annual Athens weather data, Arup was surprised to discover that free cooling was viable for a reasonable proportion of the year by mixing outside air – when it is cool enough – and recirculated air. Chilled water is used only when the outside temperature is too high for free cooling. This method requires high-efficiency filtration, but the extra fan energy to pull air through the filters was less than the chiller energy saved.

Nevertheless, the building has a significant cooling demand; the peak water-cooled chiller capacity is approximately 5MW, plus redundancy. While much of that heat is rejected to atmosphere via cooling towers, some is recovered. A 1MW ‘heat recovery chiller’ operates with an elevated condenser water temperature to preheat the domestic hot water and LTHW circuits; the impact of the reduced coefficient of performance (COP) is compensated for by the savings in natural gas.

The final step was to consider the energy source – in particular, renewables. Ground source heat pumps were rejected because of mismatched loads and payback. The favoured solution was a 100m x 100m canopy perched on top of the building and covered in PV panels. Such a bold and dominant installation was only possible because it was addressed at the very start of the project. It became a fundamental component of the architecture and a defining feature of the project. 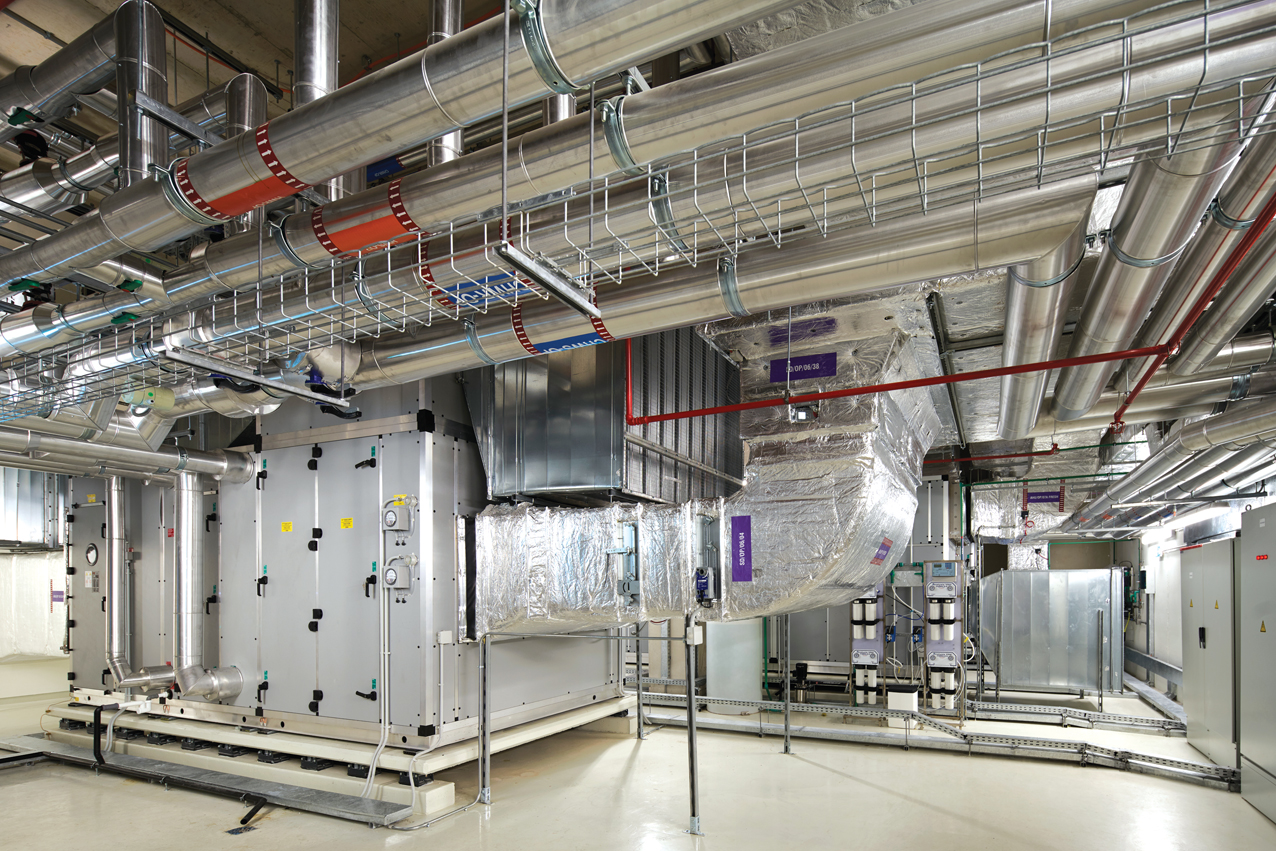 The design team wanted to maximise the yield by using as much of the surface area as possible. Most PV installations feature rows of panels separated by gaps that serve as maintenance access corridors, because standard panels cannot take much weight and walking on them risks damage. But the centre’s panels were laminated, to strengthen them sufficiently to be ‘trafficable’. The extra layer of glass reduced the efficiency a little, to 17.6%, but it allowed the entire 10,000m2 surface area of the canopy to be covered, with no separations. The annual yield of the PV installation is around 2GWh per year, and the peak capacity is 1.6MW. The electrical energy generated is so large that a transformer is housed within the ferro-cement canopy, while a sculpted cable spiralling from the underside of it expresses how the canopy collects energy from the sun and delivers electricity to the building.