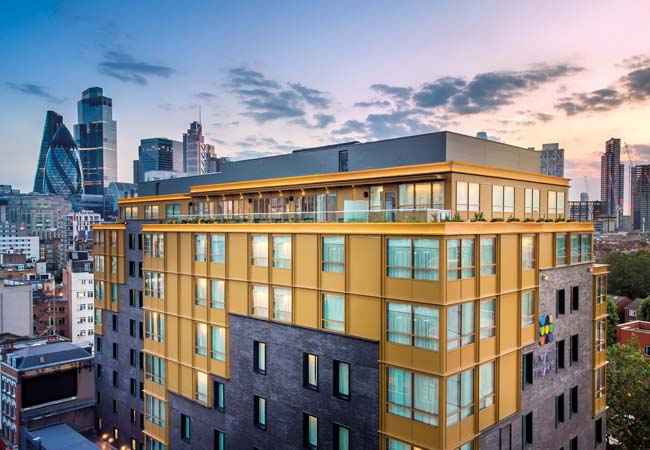 In 2017, Black Lion House was a drab, six-storey, 1980s speculative office building, set above a row of street-level retail units on London’s busy Whitechapel Road. Now, it has been transformed into the stylish, nine-storey Hyatt Place hotel, complete with ninth-floor lounge and terrace, with views over the City, a basement lobby and restaurant area, a gym, and 280 guest rooms.

Designed by architect Dexter Moren Associates, the building’s remarkable metamorphosis is due in no small part to a clever building services solution designed by ChapmanBDSP.

The engineer’s involvement with the building pre-dates the hotel transformation. ‘When I was first asked to look at the building, about six years ago, it was to refurbish the existing office for continued use as an office,’ says Tom Williams, an associate at ChapmanBDSP.

Back then, there had been a proposal to turn the office into a hotel, but it never materialised. After a change in developer, however, the hotel proposal was back on the table, and planning permission for change of use was granted in 2018. In advance of its transformation, the original office building was stripped back to its concrete structure and three floors added to the roof. 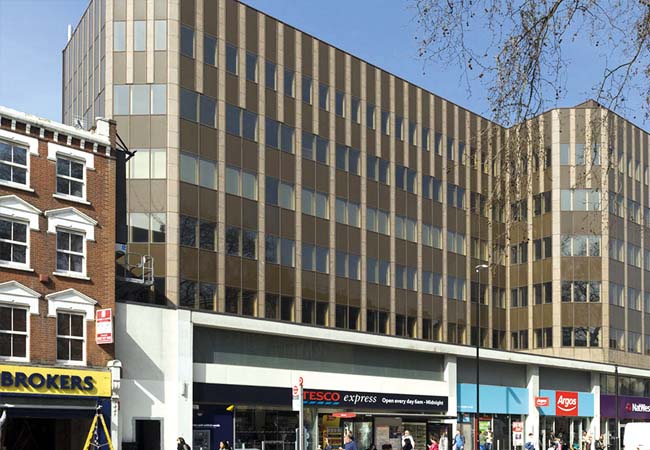 Black Lion House before its transformation into a stylish hotel

Williams calls the transformation of an office to a hotel ‘a great example of the reuse and repurposing of existing building stock’, and more straightforward than transforming a hotel into an office. ‘This is perhaps the easier of the two options, because an office floorplate is, generally speaking, highly adaptable,’ Williams says. ‘It’s open plan, so there’s quite a lot of flexibility in terms of positioning partitions to form the rooms and, I think, you end up with slightly more generous floor-to-ceiling heights.’

One of the biggest challenges in developing the building services solution for this project was that the ground-floor retail units had to remain open and in operation throughout the building’s transformation. The hotel’s guest rooms, lounge and terrace are on the floors above the shops, while below them – in the basement – is the hotel reception, restaurant, kitchen and, crucially, the plantroom.

‘We were putting all these new spaces below ground, but we could only thread the services up from the basement to the first floor using two existing risers in the old office cores,’ Williams explains.

The guest rooms are serviced with fresh air ducted from two roof-mounted air handling units (AHUs), a roof-mounted hybrid variable refrigerant flow (VRF) system supplies space heating and cooling to a bulkhead-mounted fan coil unit (FCU) in each room, and the bathrooms are served with softened domestic hot water and boosted cold water, which is piped from the basement.

In addition, fresh air is delivered to the guest rooms from the FCU bulkhead, and vitiated air is extracted from the bathrooms via the roof AHU with heat recovery. Wastewater from the hand basin, shower and WC is piped to the basement to a combined outfall for connection to the sewer. The hybrid VRF system features both refrigerant and water. 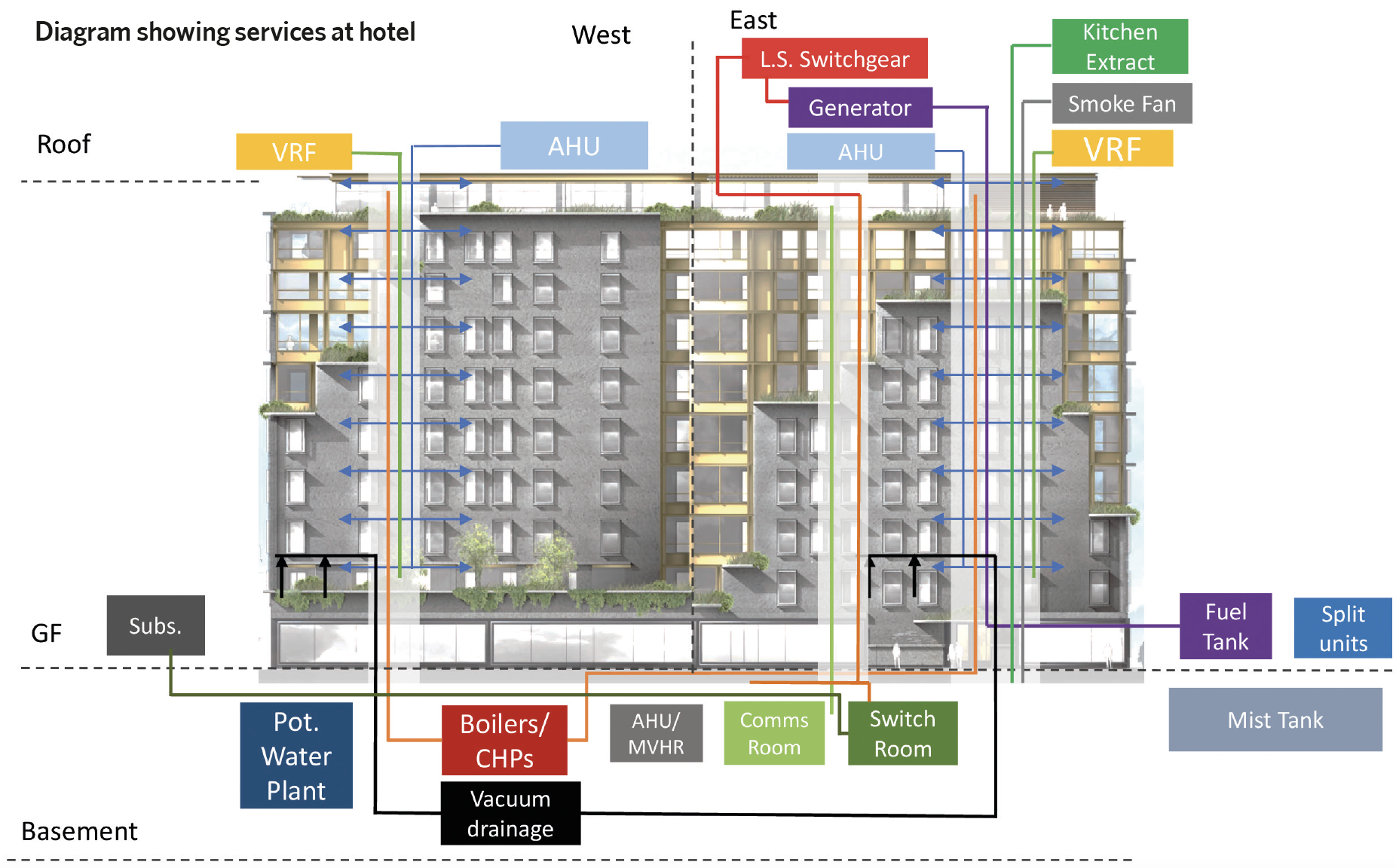 Diagram showing services at the hotel

A hybrid, rather than a full refrigerant-charged, VRF system was used to avoid the need to install a refrigerant leak-detection system in each guest room. Refrigerants are denser than air, so they collect at floor level if there is a leak.

‘For compliance with BS EN378, where refrigerants are present in an enclosed space you either have to demonstrate that the volume of refrigerant charge able to leak into a single room doesn’t exceed a set criterion, or install a significant and costly system that has capability to detect a leak and to pump down the charge from the system to remove it from the unit,’ says Williams.

The hybrid system was also beneficial in developing the energy strategy, which – in combination with a new, high-performance façade – enabled the project to achieve a CO2 reduction of 45% beyond Part L, as stipulated by the London Borough of Tower Hamlets.

In addition to the inherent occupant safety of the hybrid VRF system, the hotel has a water mist fire-suppression system installed throughout the building and in each guest room, of which there are approximately 30 on each floor. In a fire, this system uses high-pressure water and a specialised ceiling-mounted sprinkler head to dispense water as a mist of ultra-fine droplets.

The droplets evaporate to reduce the temperature of the gases and smoke in room, the radiative heat of the fire, and the oxygen concentration in the zone where the fire and water mist interact. 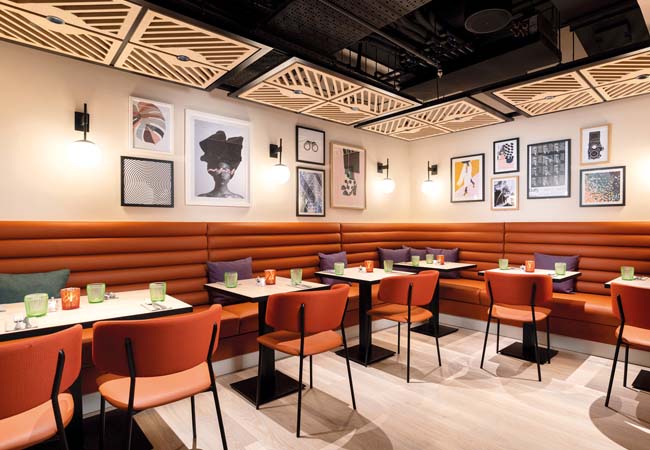 There is also a benefit from wetting other potentially combustible fuels in the room. Mist systems use much less water than conventional sprinkler systems, which helps reduce the volume of water stored. ‘We opted for a mist system because the office building had not been designed to incorporate a sprinkler system, so fitting a 185m3 – designated as a BS EN 12845 ordinary hazard 3 (OH3) – sprinkler water tank into the basement meant we would have lost about a third of the basement, which had to accommodate the kitchen, restaurant and gym,’ says Williams. ‘The lower water volume has the added benefit for the hotel of reduced time out of operation for repairs if a head were to discharge.’

It was fortunate that, in the existing office, floor slabs had been constructed in situ, using a hollow-pot system – a method whereby hollow clay pots are incorporated into the floor construction to reduce the amount of concrete used. The pots, says Williams, ‘are relatively easy to remove’ without having a significant structural impact.

Accordingly, the servicing solution involved creating a series of vertical service risers aligned with the pots. ‘We took the existing survey information showing where all the pots were located, overlaid the rooms and their risers onto that, and then started to move that jigsaw around,’ says Williams.

The presence of the ground-floor retail units meant all piped services from floors nine down to two, including drainage, had to be routed at high level along the first-floor corridor to one of two existing risers, to reach the 4m-deep basement. ‘When the services get to the first floor, we have had to transfer all the pipework via the two main cores, because we couldn’t run them through the retail units,’ says Williams (see panel, ‘Drainage system’).

In servicing the newly installed upper three floors, the consultant was able to take a more conventional approach to riser distribution. The engineer was able to drop a series of risers down from the roof through the rooms. ‘We created a plethora of new risers to serve the upper three floors to help with the distribution, accommodating fresh air and waste stacks,’ says Williams.

The hotel’s transformation from a drab 1980s office block to a stylish contemporary hotel was completed in June, when Hyatt Place London City East opened its doors for the first time. 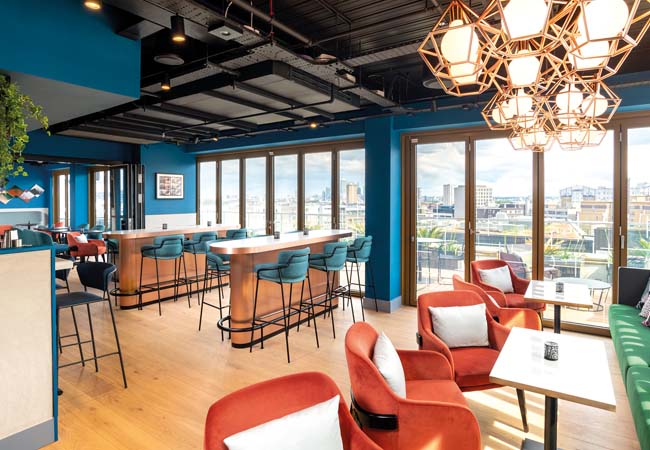