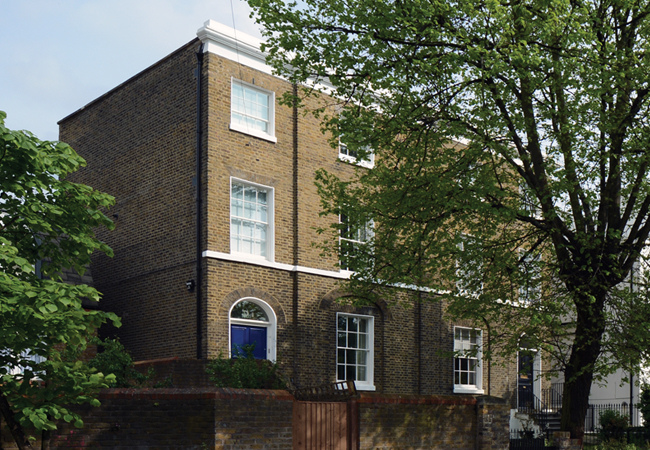 When it was bought in January 2012, the 170-year old, semi-detached, Grade II listed townhouse, in a conservation area in south-west London, was far from being an exemplar of low-energy living.

The four-storey, early Victorian home was beset by draughty, single-glazed sash windows, while its dilapidated fibre-cement roof leaked water. Inside, there were issues with rotten joists and floorboards, and uninsulated, damp, solid brick walls. 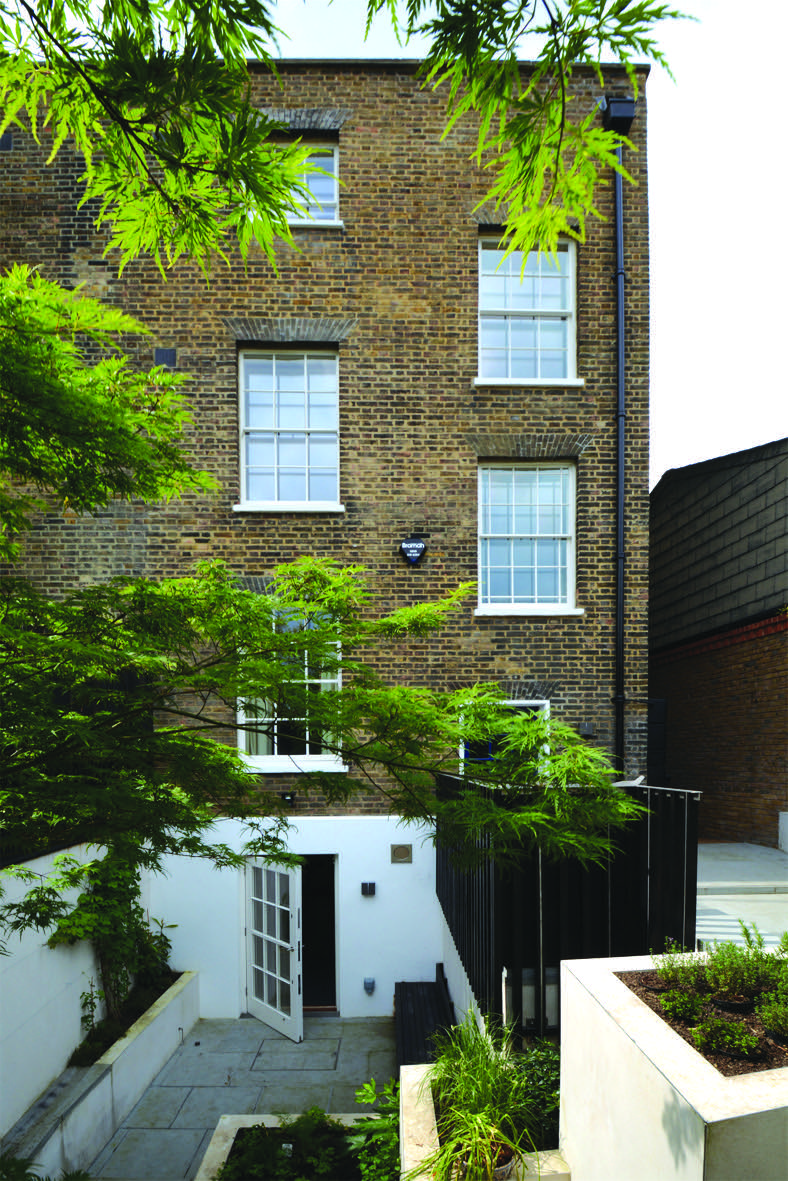 Four years later, and the house has been transformed. Arboreal Architecture has turned retrofit into a science with its refurbishment, and converted this unpromising Clapham home into the first listed building in England to meet the Association of Environment Conscious Building’s (AECB) Silver Standard for its low-energy use. This achievement was recognised at the CIBSE Building Performance Awards, where the scheme won Residential Project of the Year. The judges described it as ‘groundbreaking’ and said the entry ‘provided evidence of a mind-blowing set of work, really cutting-edge’.

The building’s new owners were two eminent scientists relocating from Scotland to London. They set Arboreal Architecture the task of refurbishing the property to make it future-proof. The architect’s response was to adopt a highly analytical approach, which no doubt was appreciated by its academic clients.

The architect’s ambition for the retrofit was for it to meet the Passivhaus EnerPHit standard for refurbished buildings. To assess the scale of the task, it modelled the original house using the Passivhaus Planning Package (PHPP) tool and Passivhaus methodology. Its heat demand was 180kWh.m-2 per year for the 170m2 of treated floor area, far in excess of the 25kWh.m-2 per year maximum allowed under EnerPHit. Meeting the standard was made more challenging because the building’s listed status prohibited external insulation or the replacement of the single glazed, vertical-sliding sash windows.

‘We wondered if we could achieve EnerPHit levels of heat demand, though we soon realised that the ductwork required for mechanical ventilation with heat recovery (MVHR) would have been too invasive, and would have compromised the historic detailing,’ says Harry Paticas, director of Arboreal Architecture, who, instead, decided to target the AECB Silver Standard. This is based on Passivhaus principles and methodologies, but sets a lower space heat demand of 40kWh.m-2 per year using PHPP. Even achieving this lower target, however, meant lopping 78% off the building’s demand for heat. Undaunted, Paticas says: ‘It seemed to be an appropriate standard to try to achieve’

Arboreal’s systematic approach to achieving AECB Silver was evident from the outset. The team looked at best practice; they contacted the Society for the Protection of Ancient Buildings and spoke to Historic England. ‘To improve the thermal performance, we had to understand what we were dealing with before we started developing the design,’ says Paticas.

The survey revealed jobs that would have to be tackled. These included: the repair of a leaky rainwater downpipe, which had soaked the external wall and caused some of the joists and floorboards to rot; removal, from the base of the perimeter wall, of the sand-and-cement render that was preventing moisture permeation from the basement walls; and repointing of the external walls to a depth of 25mm using lime mortar (see images). ‘Some of what we were doing was just basic fabric improvements by reverting back to the original materials,’ explains Paticas.

Arboreal employed building performance consultant Archimetrics to analyse the building. It carried out U value monitoring, an airtightness test and thermographic survey, and monitored interstitial temperatures and moisture gradients in the external walls. Crucially, the U value of the external walls was found to be 0.88W.m-2.K-1, significantly lower than 1.14W.m-2.K-1 calculated figure – which meant less insulation would be needed to the walls to meet the AECB target.

The airtightness test demonstrated significant leakage in certain areas, such as the sash windows, shutter boxes and loft hatch. The measured building air change rate at 50Pa was calculated at 9.6 air changes per hour (ach, h-1). The absorptivity (of rainwater) of the bricks and mortar joints was also assessed using Karsten cups on the outside walls. ‘Unusually, we did a lot of pre-design investigations,’ says Paticas. 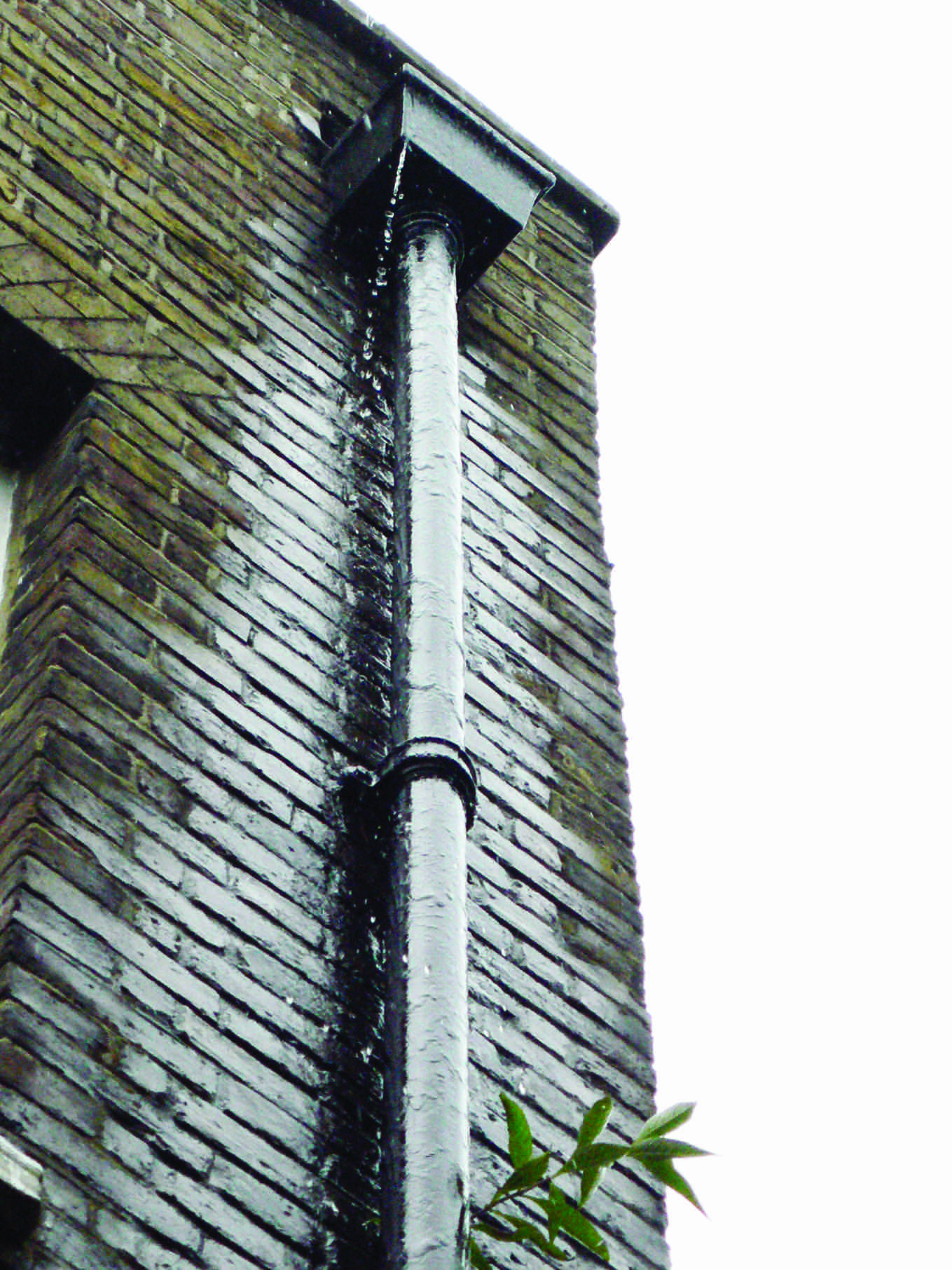 A leaky downpipe had soaked the brickwork

Archimetrics and Arboreal even turned on the heating and used a thermographic camera to plot the radiator pipework routes beneath the floorboards and locate the notches in the joists, so the new heating system could reuse these where appropriate.

Armed with its detailed understanding of the building, Arboreal set about developing a sensitive restoration scheme that would retain the original features while upgrading its services and replacing the non-original kitchen and bathroom fittings. ‘It is Grade II listed and in a conservation area, so it was never going to be a “design rich” project with extensive remodelling or an extension,’ Paticas explains. Listed building consent for the refurbishment was granted in December 2012 and works started two months later.

A major challenge was to add a significant amount of fabric insulation while ensuring the building remained ‘moisture robust’ and without resulting in future damage to the building. ‘You need extensive experience to understand what you’re doing with a retrofit, because there can be unintended consequences of adding too much – or the wrong type – of insulation,’ warns Paticas.

In response, the architect used 12 types of insulation – including wood fibre, aerogel and cellulose – and a decision on the most appropriate solution was based on several factors (see Figure 1 and panel ‘Insulation specification: range of factors considered’). 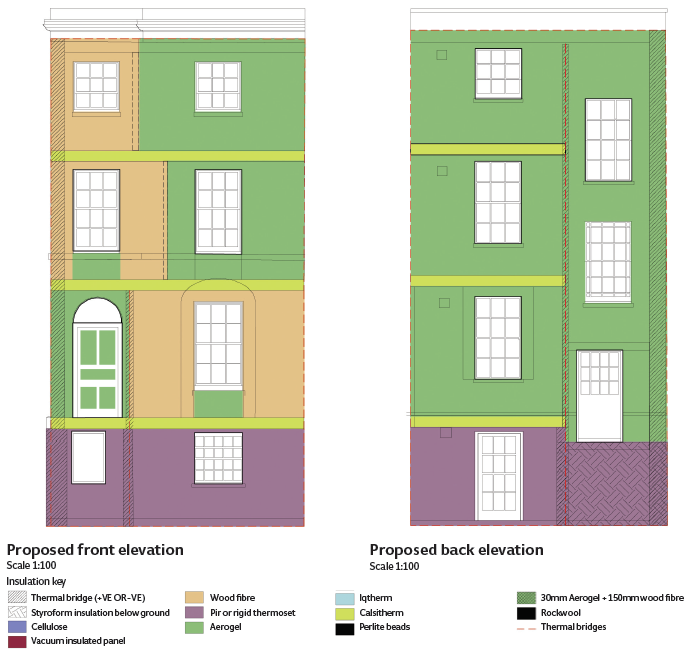 Types of insulation used on different areas of the building façades

‘We chose insulation bespoke to the location to optimise its performance,’ says Paticas. In the loft, for example, blown cellulose insulation was used between various timbers criss-crossing the space. ‘The cellulose is hydroscopic, so absorbs moisture in winter and dries out (desorps) in summer’.

In the basement, the screed was removed from the retained concrete floor so thin vacuum-insulated panels could be laid over the slab; these were then covered with new, lightweight insulating screed, with minimal impact on the finished floor level. In this way, a cheaper, high-performance solution was found without the disruption of breaking out and disposing of the concrete.

Different types and thicknesses of insulation were used for the façades depending on the factors that the insulation had to address (see panel, ‘Schedule of insulation’). The front of the house faces west, the exposed side wall north, and the party wall south. These are stock brick, solid, and vary in thickness from 492mm (two bricks) on the lower-ground floor to 330mm (1.5 bricks) on the ground and first floors, and 225mm (one brick) on the second floor. In some areas, 10mm, 20mm or 30mm aerogel-backed magnesium silicate boards have been applied, depending on factors specific to that location. In other areas, wood fibre has been used. ‘We wanted vapour-permeable construction to allow the building to work as it always has – which is to dry both inwards and outwards.’ 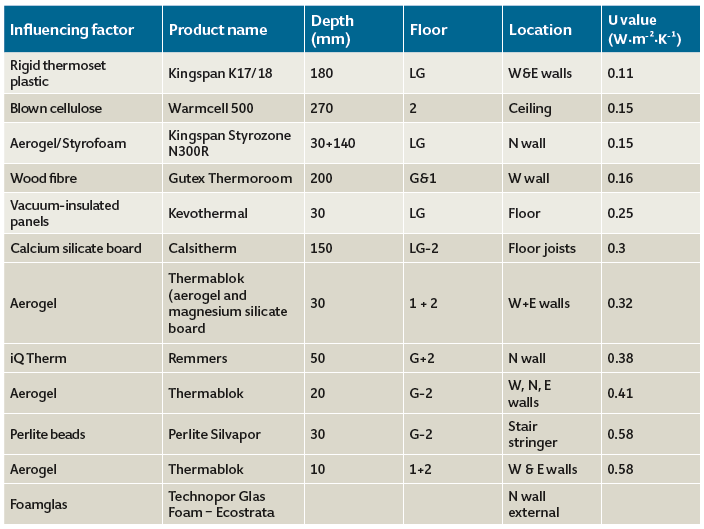 Figure 1: The range, location and U value of each insulation material installed

As well as being thermally efficient and vapour permeable, the fabric had to be airtight. The primary air barrier was formed by new lime plaster being applied to all internal masonry walls. Air leakage was minimised by a taped Intello Plus membrane on the ceiling, dressed into the walls with plaster sealing tape. In addition, joist ends – and junctions with doors and window frames – were sealed with tapes and service penetrations with EPDM rubber grommets.

Once the airtightness works had been completed, the building was pressure tested again. This time, it achieved an impressive 1.8ach at 50Pa. With co-pressurisation of the neighbour’s house to eliminate leakage through the party wall, this was 0.3ach. ‘With an air leakage rate of less than 2ach at 50Pa you need continuous mechanical extract ventilation,’ says Alan Clarke, a Passivhaus specialist and the project’s building services engineer. Decentralised continuous extract ventilation is used with an extract fan mounted in each of the three bathrooms and the kitchen. To minimise their visual impact, the fans are concealed in existing external vent grilles. Together, they deliver 0.4ach. Trickle vents in the bedroom windows supply make-up air, with additional air drawn into the house through natural leakage in the fabric. 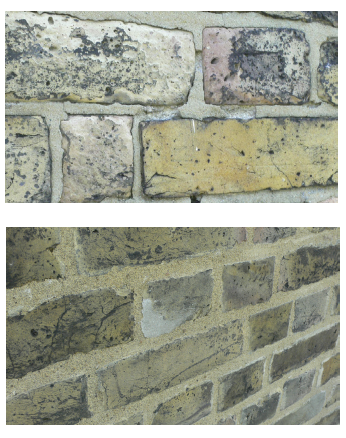 Hot water for the kitchen and bathrooms is generated by 3m2 of roof-mounted, south-facing solar thermal collectors and a 12kW condensing boiler, both of which are connected to an unvented solar hot water cylinder. A manifold enables the domestic hot water to be distributed via a radial microbore pipe system, using 10mm pipes to deliver hot water directly to the taps via the shortest route. This solution helps minimise the amount of water contained in the pipe dead-leg and heat gains from the hot water pipework.

When, in November 2013, the owners moved in, Arboreal asked them to record how much energy was generated by the three solar thermal panels – and it was found they were producing about 30% of the energy they should have been. This was because a temperature sensor in the solar hot water kit was not working properly. The boiler had also been incorrectly set to come on after the occupiers showered each morning, filling the water cylinder with heated water so it had no capacity to store the solar thermal heat. The issues were remedied and the panels’ output is now as predicted. 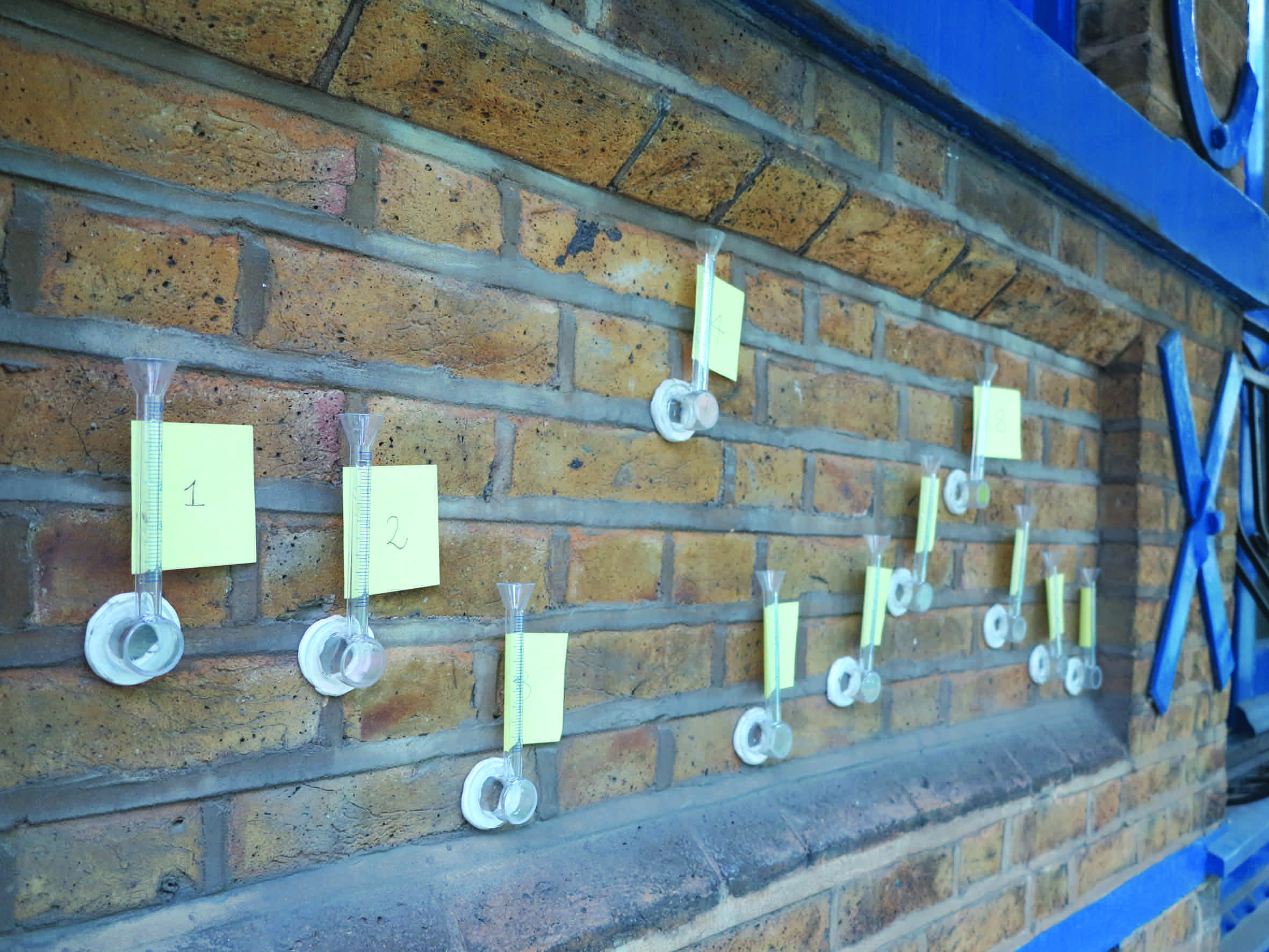 Karsten cups measured the absorptivity of the bricks and mortar

As part of the monitoring of conditions in the house, 22 wireless remote sensors have been installed in various locations, three of which record ambient temperature and humidity. These ambient sensors showed that, initially, relative humidity (RH) was higher than predicted. This was easily rectified once it was found that the mechanical extract ventilation had been set to an extract rate of 6l.s-1  rather than to the 9 l.s-1 design rate. Since the adjustment, internal temperatures have remained steady, at 20°C, and internal RH has stayed within the 50-60% bracket. ‘We found relative humidity was a lot better than in a standard Victorian house,’ says Clarke.

The remaining 19 sensors were installed in the walls before the fitting of the insulation and the replastering. Each sensor is screwed into a piece of timber sawn from the rotten joists that had to be replaced. The newly applied insulation means the walls are colder than they were, so the sensors monitor temperature, RH and wood moisture equivalent in the walls, so the team can understand the conditions experienced by the timber joist-ends and lintels set into the walls. There has been a general downward trend in the wall’s moisture content over time.

According to Paticas, the occupants find the internal conditions very comfortable. Equally importantly, the architect’s investigative and methodical approach have proven worthwhile: ‘The thermal modelling we did told us we’d get a heat demand of 40kWh.m-2 per year – and we have,’ says Paticas. ‘We’ve succeeded in closing the performance gap.’ Quite impressive for a 170-year old house.