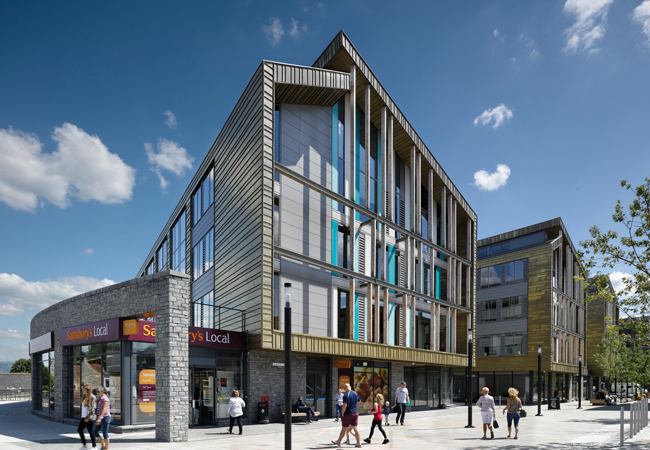 Bath and North East Somerset Council wanted the new Keynsham Civic Centre (KCC) building to be a truly sustainable office. It was aware the performance of many new schemes that aspire to be green falls short of the design intent, but the council wanted to show it is possible to deliver a low carbon building within a local authority budget.

‘The value of KCC is to demonstrate our leadership on sustainable construction, which then strengthens our function as a planning authority,’ says Micaela Basford, corporate sustainability officer at the council.

For the KCC building, Max Fordham and architect AHR set out to design and deliver a low-energy building that would perform as designed. Accordingly, the project targeted an ‘A’ Energy Performance Certificate (EPC) rating and, critically, an ‘A’ Display Energy Certificate (DEC) for building energy in use.

Now, more than two years after it was first occupied, the project is performing as designed – well, almost. The low-energy design achieved an ‘A’ EPC, but its DEC rating is currently ‘B’ – although this may be improved with further energy reductions under the project’s soft-landings framework.

The building’s impressive low carbon achievements – and even lower carbon aspirations – were recognised by CIBSE last year, when it won Project of the Year (Public Use) at the 2017 Building Performance Awards. The judges said the project showed ‘good focus on performance objectives… with strong collaboration from the outset in the project team’.

To deliver an office that was low energy in use, Max Fordham adopted a ‘passive first’ approach to the architectural and services design. Based on lessons the consultant has learned from previous projects, this approach develops the building’s form and designs its fabric to work so hard that much of the mechanical plant – which is costly to install, operate and maintain – is unnecessary.

Heating and cooling schematic for Keynsham Civic Centre. The water-cooling system for the IT servers supplies up to 20% of the building’s heat

As a result, the four-storey civic centre’s principal façades face north and south, to help control solar gains. Larger windows were created on the north-facing elevation to allow in large amounts of daylight without a direct sunlight component. The smaller windows on the southern façade have been fitted with light shelves, to provide shading and enable light to be bounced deep into the floor plates.

Surprisingly for a noisy town-centre site, the offices are naturally ventilated. Rather than use opening windows, however, the floors are ventilated via a series of acoustic louvres integrated into the window frame. These are separated from the offices by two insulated panels. The smaller top panel opens under the control of the building management system (BMS) to give ventilation during the day and allow night-purge ventilation; the larger, lower panel can be opened by the occupants for additional ventilation when needed.

“To future-proof the building against climate change, cooling pipework has been cast into the concrete planks”

This strategy is helped by the building’s narrow, 15m-wide floor plates and split-pitched roofs, which incorporate high-level opening, clerestory windows. These allow warmed air to rise up and out of the building. The designers have also taken advantage of the pitched, south-facing roof to install a 1,150m2 photovoltaic array.

The building’s structure has also been designed to complement the natural ventilation strategy. It comprises a steel portal frame with a cross-laminated timber infill, to minimise embodied carbon. To add thermal mass, precast concrete floor planks have been incorporated into 50% of the building’s floor area, to absorb heat during the day. This is then purged at night, when outside temperatures are lower.

To future-proof the building against the anticipated effects of climate change – and to enable increases in occupant density – cooling pipework has been cast into the concrete planks, for connection to a future chilled-water circuit. Winter heating is from the water-cooling system for the IT servers. This supplies up to 20% of the building’s heat via a heat pump. A constant-temperature circuit serves the underfloor heating system, while a variable-temperature circuit serves the perimeter trench heaters, to prevent down-drafts from the windows. Top-up heat is provided by gas-fired boilers.

The lighting has been carefully designed to save energy. In circulation areas, it dims automatically in response to increased daylight levels, while presence controls turn lighting off in unoccupied areas. Task lighting is supplied by floor-mounted units, controlled by occupants. The lights can be switched off as a group when daylight levels reach 500 lux, or when local zone switches are activated on a particular floor.

Power to the floors is metered, with the floorplates subdivided to aide identification of anomalies. ‘The building uses building physics, rather than being based on complicated technology. There was no financial uplift for it to be built to high energy-performance levels and it is a nice working environment – all of which makes me proud to show people around this public sector building,’ says Basford. 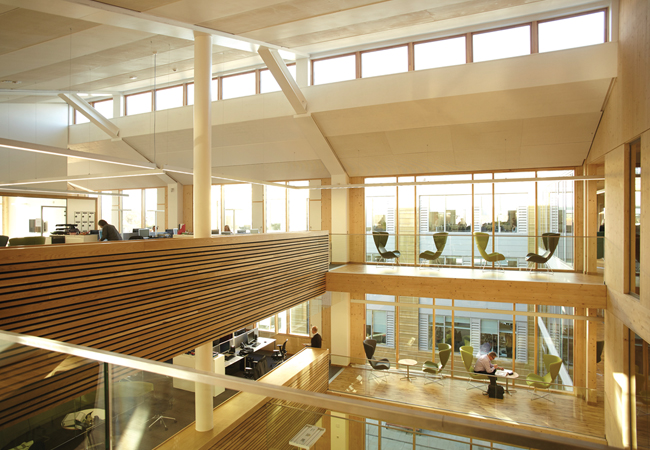 ‘As a member of staff, the wellbeing aspects of the building are also important to me. Apart from providing lots of natural light to the building, the windows have opened up some fantastic and alternative views of Keynsham and its surroundings, including lots of greenery.’

The scheme uses soft landings, so the designers and the constructor, Willmott Dixon, have remained involved with the building after completion, to fine-tune and de-bug systems, and help occupiers to best manage what has been delivered.

Willmott Dixon is responsible for reviewing the building’s actual energy performance on a month-by-month basis, to identify where it differs from the energy budget. The project team then works together to further optimise the building’s performance. It is an approach that appears to be working, if a little slowly.

Tamsin Tweddell, senior partner at Max Fordham, said: ‘After a period of learning with the building in use, we have identified ways to further refine the systems – in particular, the controls for the heating and natural-ventilation systems.’ There has been ‘meaningful progress’ in the past three months, she added, with energy consumption expected to fall as a result. Table 1 shows how energy consumption is falling over time, as the systems are optimised, and the team continues to progress towards the DEC A-rating target.