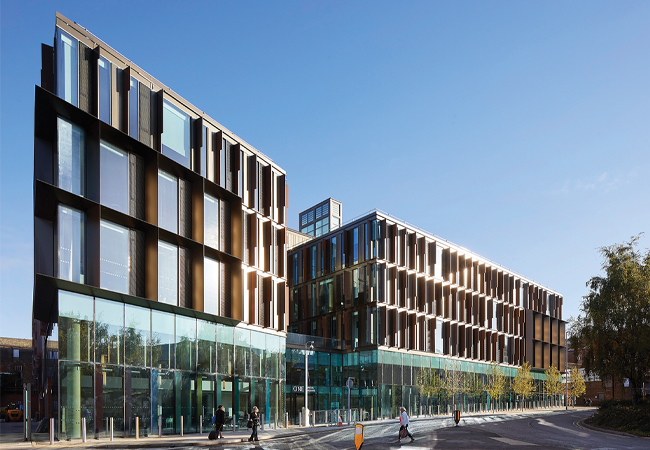 One Angel Square is neither groundbreaking nor game-changing, but it demonstrates success through understatement and simplicity,’ says James Hepburn, the building services lead at BDP, the scheme’s multidisciplinary designer.

He says: ‘It adopts best practice passive design strategies and combines them through an approach to deliver a highly efficient and highly comfortable building.’

What Hepburn might also have mentioned is that the scheme successfully demonstrates how to value engineer a project to deliver an impressively simple and robust scheme – and that the project so impressed the judges at this year’s CIBSE Building Performance Awards that it won the Project of the Year – Commercial/Industrial category.

Value is a theme that has driven the design-and-build project from its inception. One Angel Square was developed as a key element in Northamptonshire County Council’s (NCC’s) drive to improve its operational efficiency. Its rationale was that a new city centre office would allow 2,000 council workers to be relocated from 12 offices scattered around the town, improving operational efficiencies and generating savings on rent and maintenance. Moving the workforce back into the town centre would also help to reinvigorate the area.

When BDP won the competition to design One Angel Square, the brief for the building services was akin to that of a speculative office development: the council wanted mixed-mode ventilation with passive chilled beams and an integrated lighting solution throughout the office spaces. ‘A very detailed brief had been set; it also required the building to be simple to operate,’ says Hepburn.

BDP’s architectural design for the office is based on two L-shaped, three-storey wings of office accommodation set around a central, covered courtyard. This form allows natural light into the heart of the building and ensures good connectivity between the floors and across the courtyard. ‘The design provides a modern workspace that is flexible, efficient and promotes collaborative working,’ says Hepburn.

The façades also have louvred panels next to the glazed areas, which conceal automated fresh air ventilators. The façade ventilators open automatically under control of the building management system (BMS), but they can be manually overridden using a button mounted on an adjacent mullion. ‘This solution takes the ventilation element away from the window, so you don’t end up with window blinds obstructing an open vent,’ says Hepburn.

In natural ventilation mode, air enters the offices through the façade ventilators. After passing across the office floors, it rises up through the central void to exhaust through the high-level openings in the streets and through four wind towers.

When natural ventilation is not possible, high-efficiency AHUs provide mechanical ventilation from VAV boxes concealed beneath the raised floors in the offices. Air supply is via floor-mounted displacement diffusers. ‘We have CO2 sensors around the floor plates; if the window is open – or people choose to open a window – then the CO2 levels within the space will reduce and the mechanical fresh air supply to those spaces will automatically ramp back,’ says Hepburn. ‘It’s a system that has been designed to look after itself.’

In the original design, passive chilled beams were included to provide cooling to the offices when the system was in mechanical ventilation mode. ‘When we developed the design, it was fully aligned with the brief,’ Hepburn says. When the original scheme was put out to tender, however, all three tenders were returned significantly over the project budget. The design team set about finding solutions to make significant savings, including to the building services.

Hepburn says the contractor, Galliford Try, advocated a move away from a mixed-mode solution to a ‘sealed-building scheme incorporating fan coil units above suspended ceilings’. Rather than abandon the mixed-mode strategy completely, however, BDP set out to reduce costs by working with Galliford Try and the M&E specialist contractor, Briggs & Forrester, to remove the chilled beam system. ‘Our experience has been that making significant savings requires the removal of entire systems,’ says Hepburn.

BDP was helped in its quest to eliminate the chilled beams by NCC’s thin client IT strategy. This means almost all of the council’s office computers are connected to a remote server, which does most of the processing work, so the desktop computers on the office floor plates give out much less heat than conventional computers.

These up-and-down lighters provide 300 lux of light on the desks and 100 lux on the floor (and can be increased to 500 lux by users). The units incorporate integral controls for daylight dimming and include a presence/absence detection sensor, plus a switch enabling users to override these functions.

There was some trepidation about the proposed LED solution because the floor-standing luminaires were new to the market. ‘The contractor and its supply chain were keen to switch to more conventional pendant fittings, or adopt cheaper products that did not match the functional, operational and aesthetic performance of the BDP proposals,’ says Hepburn.

The roof-mounted PV array was selected as the most suitable installation because of building orientation and a favourable payback period. Project budget pressures meant alternative means of funding the PV array were explored and local authority partner organisations were approached.

One of these provided the capital investment for a 1,200m2 photovoltaic installation on the unshaded flat-roof areas of the building. The partner organisation benefits from the Feed-in Tariff (FiT), but One Angel Square enjoys onsite energy generation.

What’s more, the PV array meets the entire electrical load of the building during summer weekends and delivers an annual operational saving of more than £15,000 for Northamptonshire County Council and a FiT contribution to the investor of more than £8,000 per year.

‘The NCC’s thin client IT strategy, coupled with a new task-focused LED lighting solution, reduced internal gains to a figure significantly less than the cooling delivered by the chilled beams,’ says Hepworth. ‘This meant the project could move away from the chilled beam/integrated service modules, while retaining the mixed-mode strategy.’

An additional benefit of the innovative HVAC approach is that there are now very few services at high level in the offices. This gives a minimal aesthetic, but – more importantly – the concrete soffits provide exposed thermal mass to help absorb daytime heat. Night-time cooling recharges the soffits ready for the next day. The solution has the advantage of extending the period that natural ventilation can be used before the demand-controlled ventilation system comes into operation. ‘If you can take out whole systems, you get big value-engineering savings,’ says Hepburn.

BDP modelling proved the operational energy benefits of retaining the mixed mode/demand-controlled ventilation approach for the scheme. ‘Our TM54 modelling and sensitivity analysis estimated a fan energy saving of 30% by retaining the mixed-mode solution,’ says Hepburn. ‘It is difficult to quantify the impact of this reduction in the actual building, but it is noticeable when visiting that the users enjoy the natural ventilation for a significant part of the year.’ TM54 modelling was used to estimate the building’s high, medium and low annual energy use: the figures for these were 112kWh.m-2, 90kWh.m-2 and 81kWh.m-2 respectively.

‘Our targets align with a good-practice, naturally ventilated, small cellular office and are half that of the benchmark for a general office in TM46,’ says Hepburn. ‘Our first year of energy-consumption data suggests the building is currently exceeding, slightly, the upper end of the TM54 prediction, at around 130kWh.m-2 per year – but this is improving steadily through proactive engagement by BDP with the client and contractor teams, and regular site visits as the buildings settles down.’

The building also incorporates extensive smart (automatic) metering of electricity. including generation and export meters for the onsite electrical generation from the 1,200m2 roof-mounted PV array, after the feasibility of various types of renewable and low and zero carbon technologies were assessed (see panel, ‘Fit-for-purpose PVs’).

In their citation for the award of Project of the Year – Commercial/Industrial, the CIBSE judges described the scheme as ‘a good-quality design, delivered within a limited budget’. In particular, they liked the use of TM54 modelling ‘to develop robust operational cost estimates to maintain value by defending engineering options in the design that would lead to better value outcomes’.