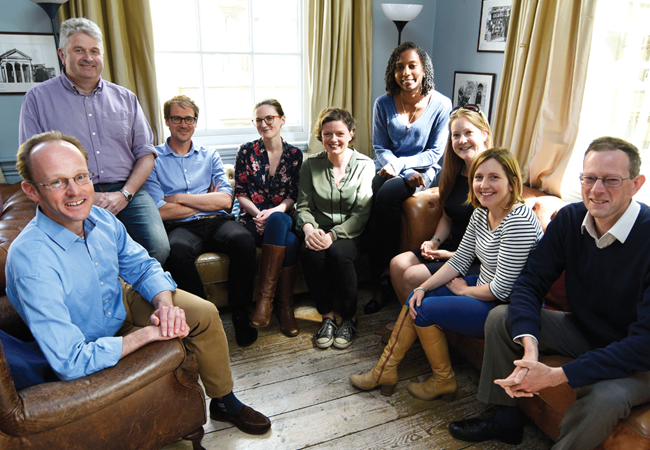 As the oldest university in the English-speaking world, the University of Oxford has acquired a vast estate of buildings over the past nine centuries. Currently, it has more than 240 in its functional estate, some dating back to the 14th century.

With 650,000m2 of floor space, the university understood that there were huge savings to be made from cutting energy use, so it started a carbon-reduction programme in 2011. This has been an unprecedented success. Over the past six years, it has saved an estimated 5,536 tonnes of carbon (tCO2) and £1.3m in annual energy costs – a feat that was recognised last month, when the university’s estates services team was crowned Facilities Management Team of the Year, and overall champion, at the CIBSE Building Performance Awards. 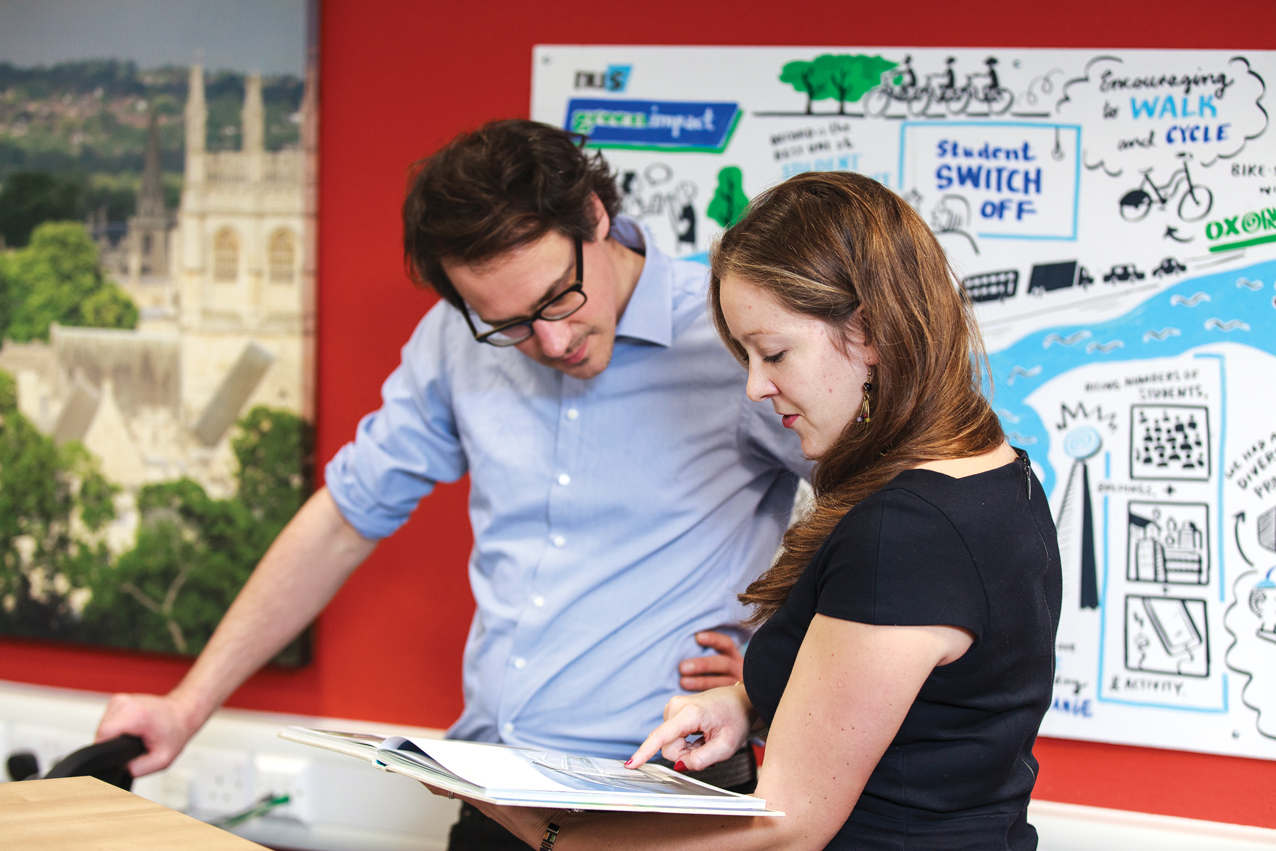 Carbon-reduction projects manager Lucinda Lay, who is a member of the environmental sustainability team in estates services, is pleased the work has been acknowledged by the building services sector: ‘This award gives each and every person the recognition they deserve at an industry level. Having this shows that we are taking carbon-reduction seriously, and doing our best. The [satisfaction] we get is when we walk into a building and we are proud to be there because it has a correctly operating BMS system and is running efficiently,’ Lay adds.

The university set an ambitious target to reduce direct carbon emissions – from buildings and vehicles (scope one) – and indirect emissions, from purchased electricity (scope two), by 33% by the end of 2020, against a 2005-06 baseline. More than 204 projects have been completed, including: installation of solar photovoltaic panels (PVs); LED lighting; building management system (BMS) optimisation, and building system upgrades. The team’s efforts have paid off because, in 2015-16, the university generated 54 times more onsite energy than in 2005-06 and, in 2016-17 – for the first time – its emissions were 5% lower than the 2005-06 baseline. CO2 per square metre levels have also fallen, by 28% since 2006.

But the benefits aren’t just in the numbers. The projects have helped to improve user experience, as well as empower building and facilities managers to take control of their sites.

Stephen Pearson, head of estates services’ building services team at the University of Oxford, says: ‘The biggest eye opener came from the seasonal commissioning and optimisation of major capital projects. It demonstrated how hard it is to achieve peak performance with zero and low carbon technologies when combined with conventional systems. It has also produced data that I expect will change the way we design services in the future.’

The mathematical, physical and life sciences, and medical sciences divisions account for 76% of the university’s carbon emissions, and were where the environmental sustainability team was able to make the most savings. One of the main reasons for this is the ventilation and conditioning requirements of the laboratories, as well as the energy-hungry equipment contained within them, says Lay.

A subsidy scheme was put in place to upgrade the university’s 500 ultra-low-temperature freezers, while funding for more than 130 glass dryers was also provided. 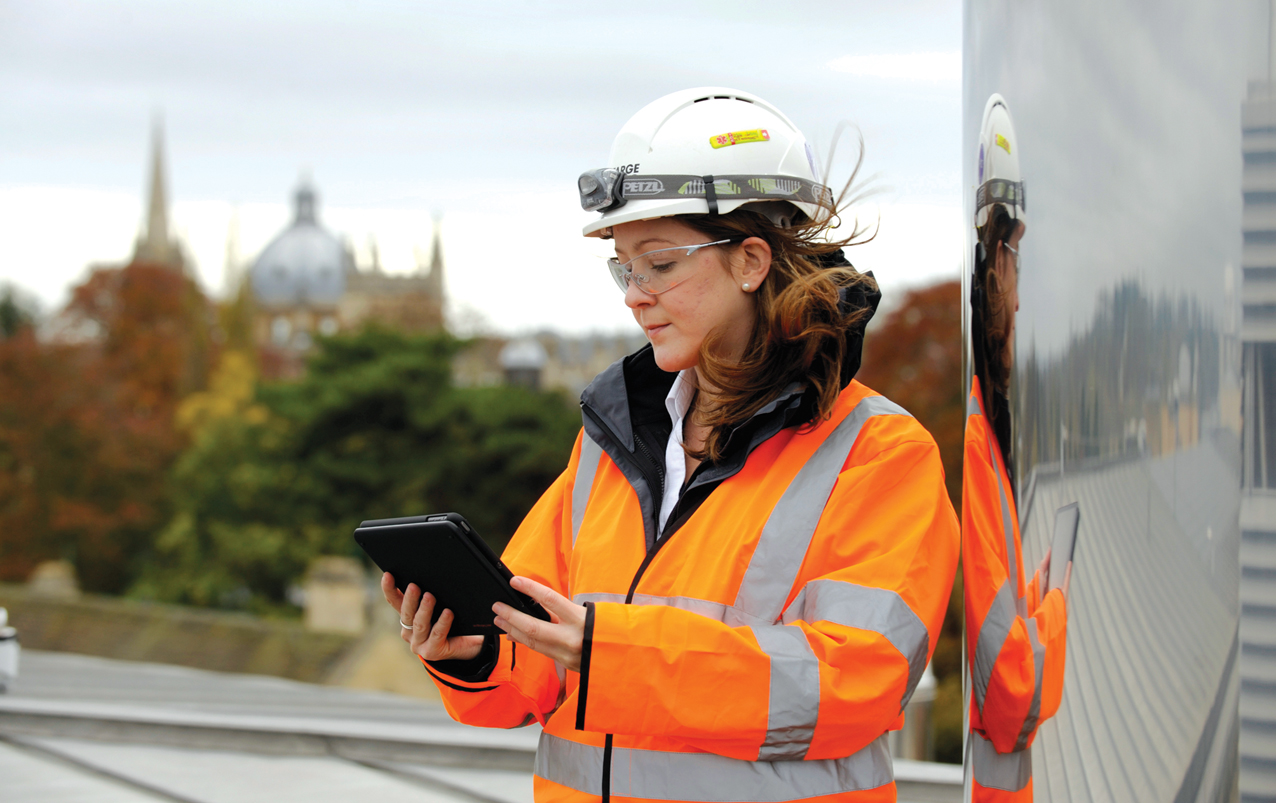 The old uninsulated units, which were often left running, caused laboratory spaces to heat up, so additional cooling was required. The new, insulated glass dryers have 24-hour, seven-day timers, so can be programmed to switch off automatically. It is estimated that 370 tCO2 can be saved simply by reducing the amount of time the dryers are on and increasing the efficiency of the units. As an added benefit, the cooling load in laboratories will also be reduced, says Lay.

Engagement materials, including ‘Shut the sash’ stickers – have been made available for all staff. These remind users to close the sashes on fume cupboards, to ensure less conditioned air is forced through the stack, reducing the amount of energy used by the fans.

The university is also in the process of converting chemical fume cupboards from constant air volume (CAV) to variable air volume (VAV) with energy recovery. In the chemistry research building, 300 fume cupboards are already VAV and, using a £500,000 budget, the rest of the estate’s units will be upgraded over the next two years.

It’s all about talking to occupants … using language they can understand, explaining the risks and the benefits

Investment in renewable energy has led to more than 1,000 solar panels being installed on roofs. These have now saved £60,000 in annual energy costs and 226 tCO2 in carbon emissions.

When installing PV panels on some of the science buildings, the team had to ensure the electrical fields created did not interfere with the electron microscope and other highly technical equipment in laboratories. ‘We had to engage with the users and make sure everyone was on board,’ says Lay. ‘The primary focus of the university is research and education, and we have to support that.’

The biggest return on investment for the university was the optimisation of its building management system (BMS), which involved changing set points and time-clocks on sensors and controls. 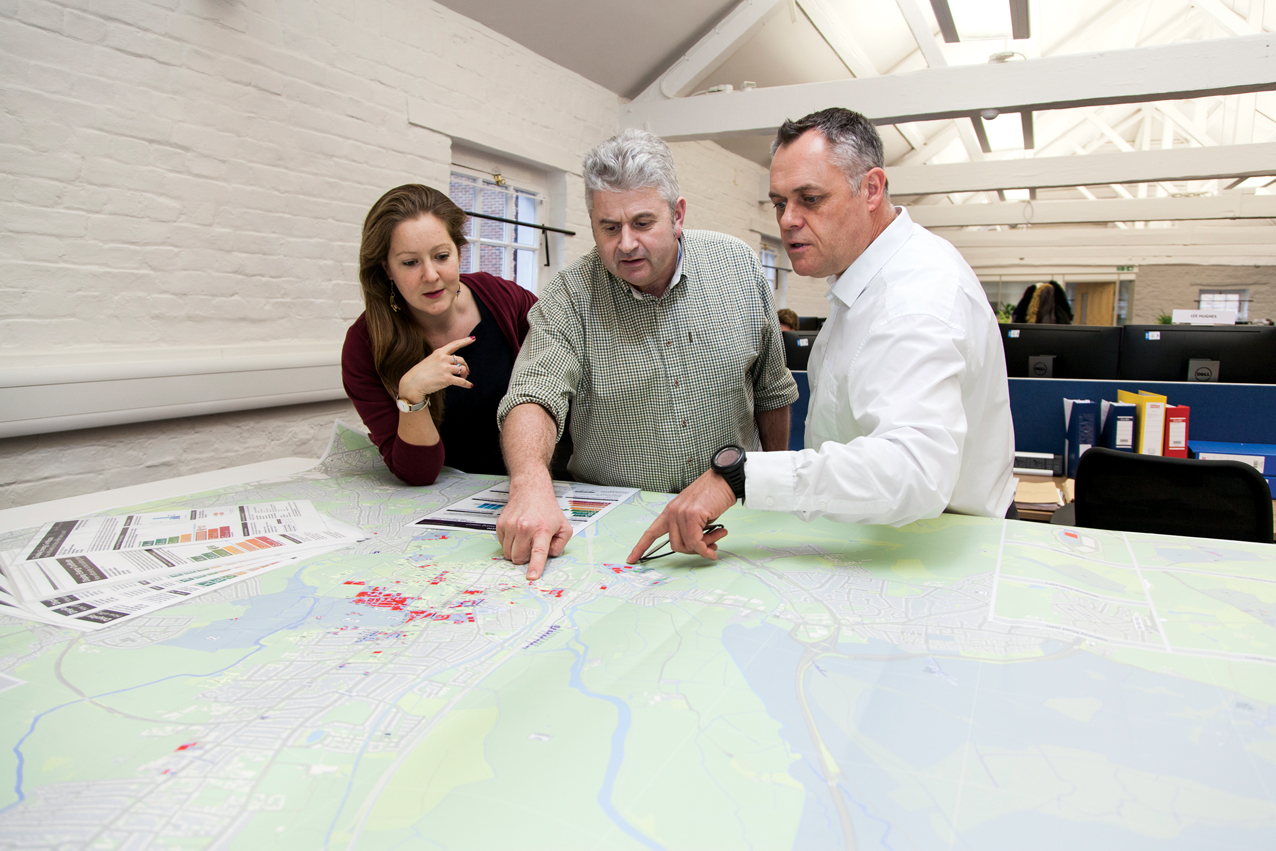 Already, of the 1,546 tCO2 per year savings that have been identified, 1,134 tCO2 have been realised from 23 buildings since 2015. In many cases, this has led to further mechanical projects because the scheme identified where systems require maintenance or upgrades, says Lay.

Each building goes through a 12-month process, involving increased metering of its activity, analysis, and implementation of changes, before monitoring and validation to assess impact. ‘We have made progress in identifying what those projects are, and how we could turn them into best practices,’ says Lay. ‘Every time we open the door, we find something new – there’s always an opportunity around the corner.’

Occupied by the social science library, plus four teaching and research departments, the building operates 24 hours a day. To optimise it, the team changed air handling time-clocks and removed unnecessary dehumidification, which saved around £16,000 and 93 tCO2 a year – the equivalent of the carbon emitted from 15 average households in one year.

George Newman, senior facilities manager at Manor Road Building, says: ‘The changes were low impact and easy to implement, and the building is now able to perform optimally for the users – we have received no complaints.’

Since January 2015, Hoare Lea has been working with the university to carry out detective work on existing systems. Since their intervention, the department has saved about £15,500 on its energy bill, and 84.5 tCO2.

After interviewing students about when they were most likely to use the building, services were adjusted to operate from noon to 11pm, rather than from 9am to 5pm. 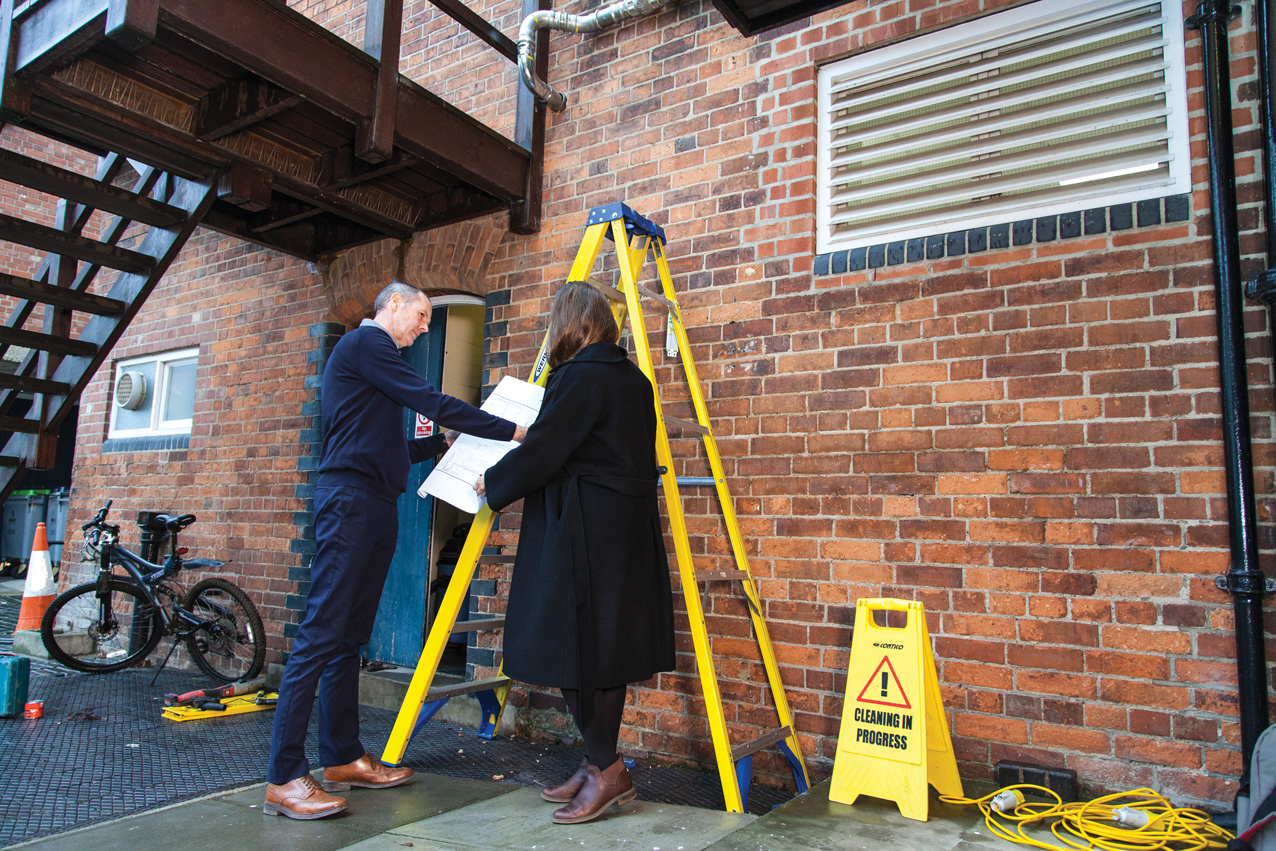 The university and Hoare Lea optimised the chillers, VAV units, and the atrium and bioinformatics ventilation systems, saving approximately £33,815 and 185 tCO2 – or 5.8% – on its annual emissions. The main carbon-saving interventions included adjusting cooling and heating requirements – so, instead of running continuously, systems operated when the building was occupied. For a detailed case study, see ‘University challenge’, (CIBSE Journal, October 2016).

After reviewing the Swindon building and its internal environment, the Bodleian Libraries team, supported by estates services, optimised the BMS, while maintaining tight control of environmental conditions. Improvements at the 17-acre site, which holds 12 million books, included: changing the air in the facility less often; ensuring the humidifiers and pumps were used more efficiently; decreasing the demand on the building’s chillers; and limiting the speed of the fans. The BMS project has reduced annual carbon emissions by 410 tCO2 – equivalent to making five million cups of tea – and saved around £77,000 a year in energy bills. Bacteria levels in the storage facility are monitored periodically to guarantee the safety of the books.

To help cut carbon emissions further, a ground-mounted 50kW PV system was installed outside the facility. When operating under optimum conditions, it supplies all of the building’s electrical demand for free, without carbon emissions. The PV system generates 55,000 kWh of power a year, saving 27 tCO2. On good days, the building even exports power to the national grid. 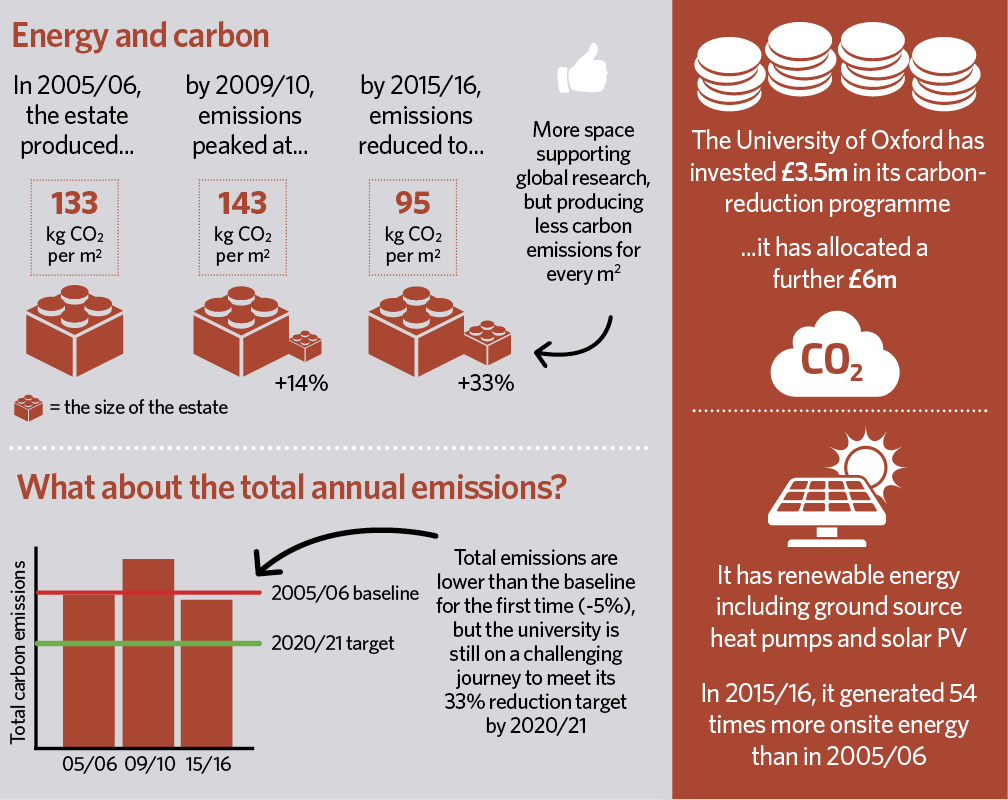 A snapshot of the university’s carbon reductions

However, the benefits are not always in carbon reduction or financially driven, says Lay. ‘Sometimes, you get a small return on investment. Our motivation is the enjoyment occupants get from a building – for example, if we help them fix a room that is overheating. It’s a minor change, but it makes the occupants really happy and, next time, they will be much more willing to help us make further savings.’

Monitoring changes and making sure they stay in place is a full-time job in itself, adds Lay. ‘Sometimes, we return to a building after six months and find it in manual mode – or discover its use has changed. It’s a constant task, especially as there is a huge shortage of BMS experts.’

BMS user training now features as part of the environmental sustainability training programme, to ensure lessons learned are embedded and that optimisation of systems is maintained.

To bridge the knowledge gap with building and facilities managers (FMs), the university has launched workshops on energy management and BMS training, and for sharing best-practice case studies that can be implemented elsewhere. ‘It’s about empowering FMs to make decisions that ensure buildings work better for them, and sharing experiences so everyone buys into the vision,’ says Lay.

The university has also invested in new user-friendly monitoring and targeting software – SystemsLink – that gives building users access to their energy performance data and allows for direct billing. In October 2015, it also launched the Carbon Innovation Programme (CIP). This enables multidisciplinary teams of staff and students to propose and develop ideas for reducing building energy use and associated carbon emissions across the university. One such proposal was the installation of a biomass boiler at Tubney House – a zoology department building that is off the gas grid and running off kerosene. 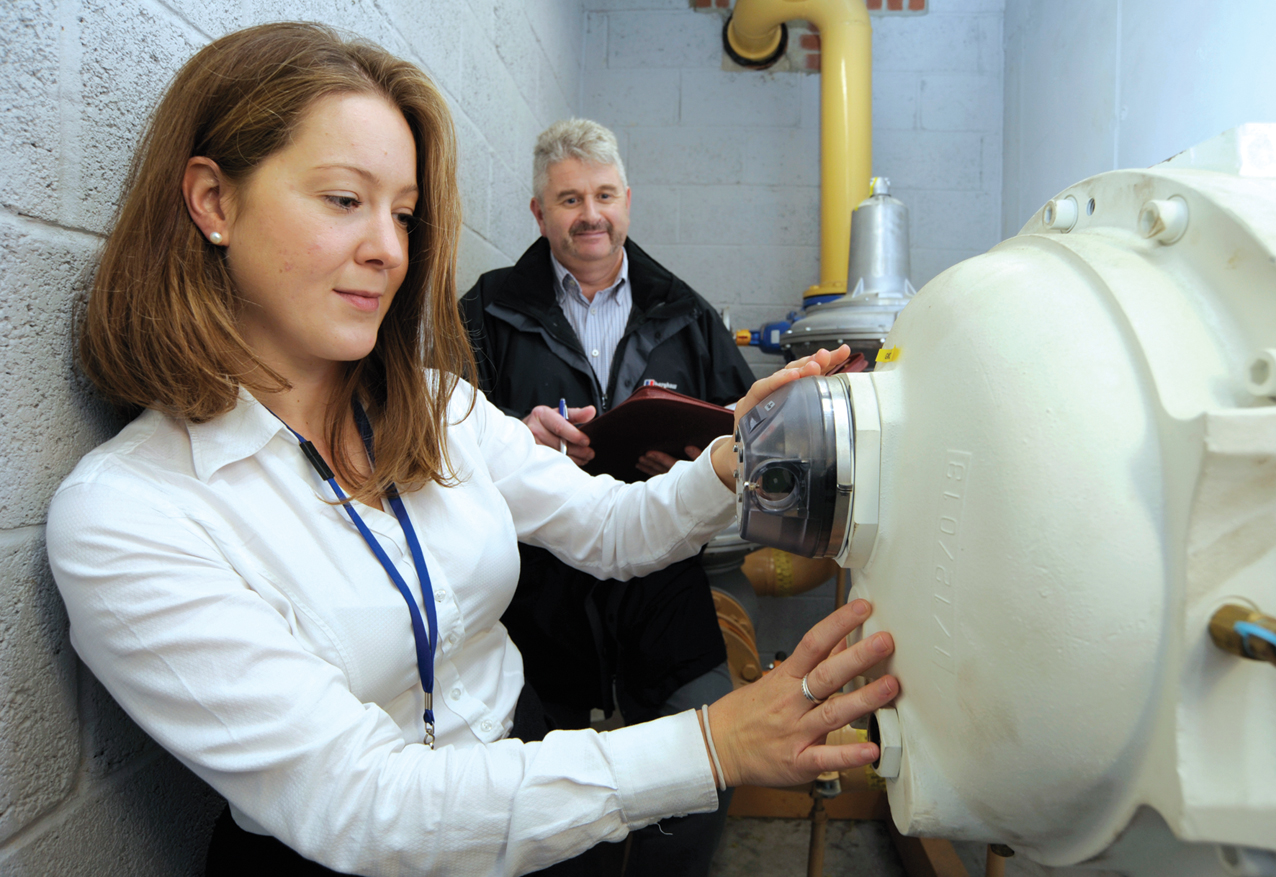 Another project launched by the university is Green Impact – an environmental accreditation scheme, run by the National Union of Students, which allows staff and students to improve the sustainable practices of their office, building or department. More than 3,000 actions – including the ‘Shut the sash’ stickers – have already been completed by more than 40 teams.

Lay says the carbon reduction programme, constructing new buildings to Passivhaus standard, the decarbonisation of the grid, and changes to the way the estate is being used, have all contributed to energy savings. The biggest lesson learned, she adds, has been stakeholder engagement. ‘We are a services delivery team, so it’s all about talking to occupants and getting them on board – and, when discussing a tricky engineering concept, using language that they can understand, explaining the risks and the benefits.’

Estates director at the Said Business School Mat Davies believes the work being done by the University of Oxford’s environmental sustainability team is transformative. ‘It sends a clear message that we are an organisation that understands our responsibilities, actively embracing every opportunity to reach our challenging targets for carbon reduction. The CIBSE award is deserved, and has been earned through great professional diligence and a genuine desire to reduce our environmental impact.’

Paul Goffin, director of estates services, adds: ‘Our mission is to develop, maintain and manage the University estate in a safe, efficient and sustainable manner, ensuring the continued enhancement of our unique physical heritage and the provision of a world class research, teaching and learning environment. We put customers at the heart of what we do and this has been demonstrated through the carbon management programme. The University of Oxford is proud to be leading the way on building performance.’