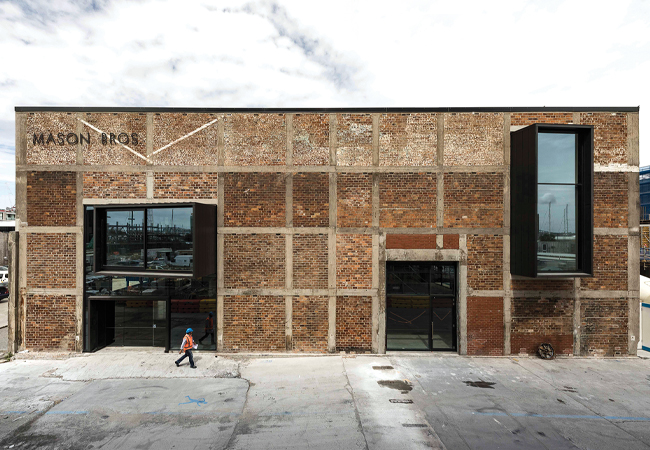 The Mason Bros building was originally an industrial warehouse, which was built in the 1920s. Credit: Warren and Mahoney – Dawid Wisniewski

The Mason Bros project does not have any revolutionary technology or world-first innovations; from the outset, there were no grand objectives (or the corresponding budget) to demonstrate world leadership in sustainable design – yet this is what we achieved,’ says Anthony Calderone, technical director, built environment, at Mott MacDonald. 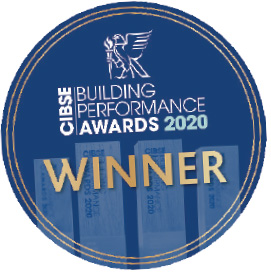 The scheme gained the accolade Project of the Year – International at the CIBSE 2020 Building Performance Awards.

Judges were highly impressed by the building getting the highest possible ratings for energy performance from the New Zealand Green Building Council. It is the first adaptive reuse building in New Zealand to achieve a 6 Green Star for as-built design, and a 5.5 Star NabersNZ rating for the effectiveness of the operation of the building.

The judges said the project team had excelled in getting the fundamentals right. The building services have ‘achieved great results by applying existing technology and methods well, rather than by reinventing the wheel,’ they said.

What makes the building’s sustainable achievements impressive is that this is not a purpose-built low energy development; before its imaginative transformation into a multi-tenant office building, Mason Bros was an industrial warehouse, built in the 1920s.

The warehouse is located in the Wynyard Quarter redevelopment area of Auckland, a precinct undergoing a major transformation under the control of Auckland Council. Precinct Properties were selected to develop the building. Working with building services engineers Mott MacDonald and architect Warren and Mahoney, the developer initially targeted a 5 Green Star rating and 4.5 Star NabersNZ rating.

In addition, the project had to meet a number of targets and obligations on water consumption, construction waste recycling and materials selection, which were enshrined in the development agreement from land owners Panuku Development Auckland – the council’s development vehicle.

Although the former warehouse was at the end of its serviceable life, a decision was taken to retain much of the existing structure and building fabric. ‘Considering studies have estimated that it can take 20 to 30 years for energy and emissions from a building to outpace the embodied energy, the decision to retain the building’s envelope provides the Mason Bros redevelopment with a significant lifecycle benefit when compared with an equivalent new building,’ says Calderone. 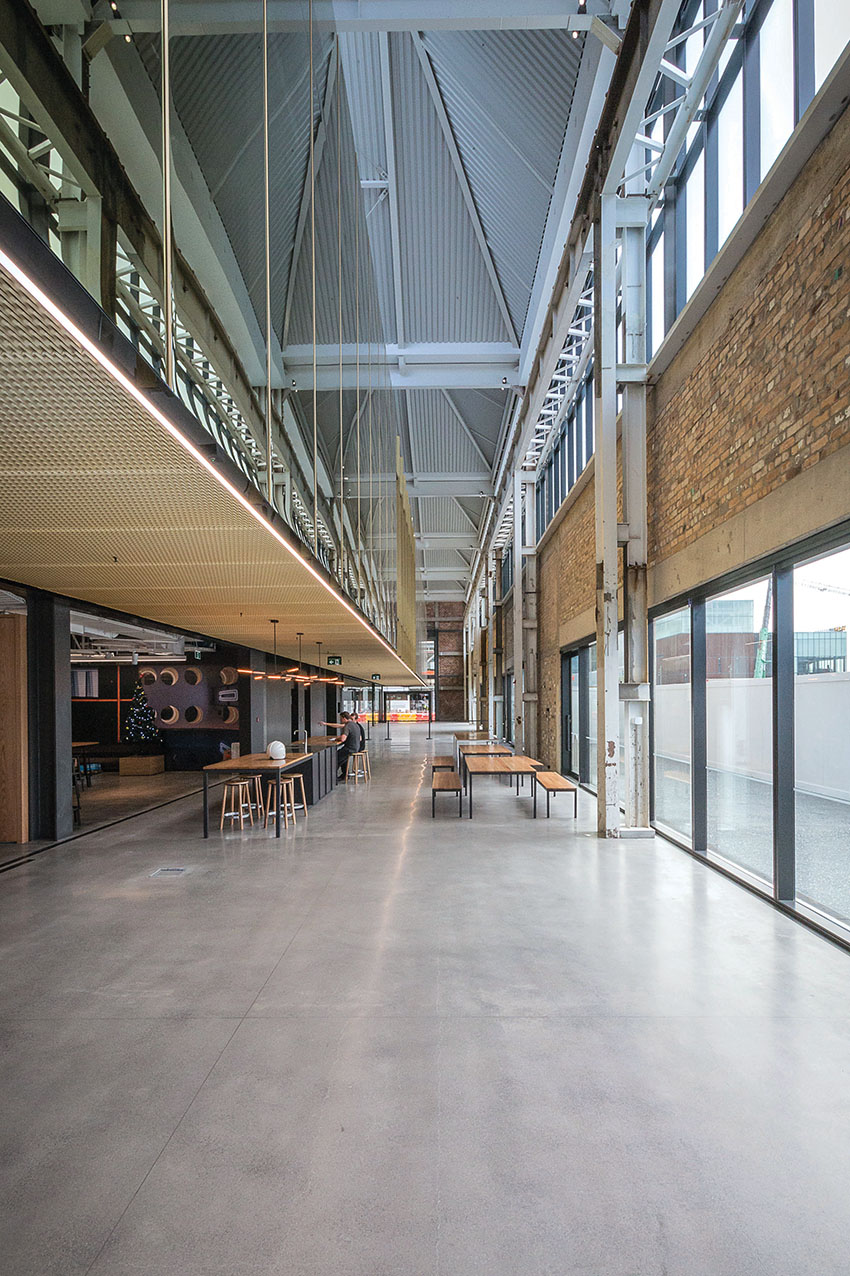 The retained industrial envelope includes the sawtooth roof, complete with south-lights, and its red brick façade. Inside this shell the building has been transformed with the addition of two new floor plates to create 5,500m2 of flexible workspace. Impressively, the floor plates are set back from the façade, where they are hidden behind a screen of highly-reflective glazing.

The overall effect is that the workspace appears as a giant shiny new box placed inside the building’s gritty industrial shell. Scott Pritchard, CEO of the developer Precinct Properties, has described the scheme as ‘like creating a ship within a bottle’. An atrium incorporating a large feature staircase allows occupants access from a ground floor arcade into the box.

To develop a cost-effective building services solution to meet both Green Star and NabersNZ criteria, Mott MacDonald looked at various combinations of building services and building fabric modifications using IES-VE software. It ran more than 30 different simulations to find a solution that would ensure low energy consumption and offered plenty of natural light.

Each simulation scenario was assessed against capital cost, long-term energy efficiency and occupant amenity. ‘Through completing this assessment process early in the design phase, we were able to influence the architectural design to determine optimal performance,’ explains Calderone. 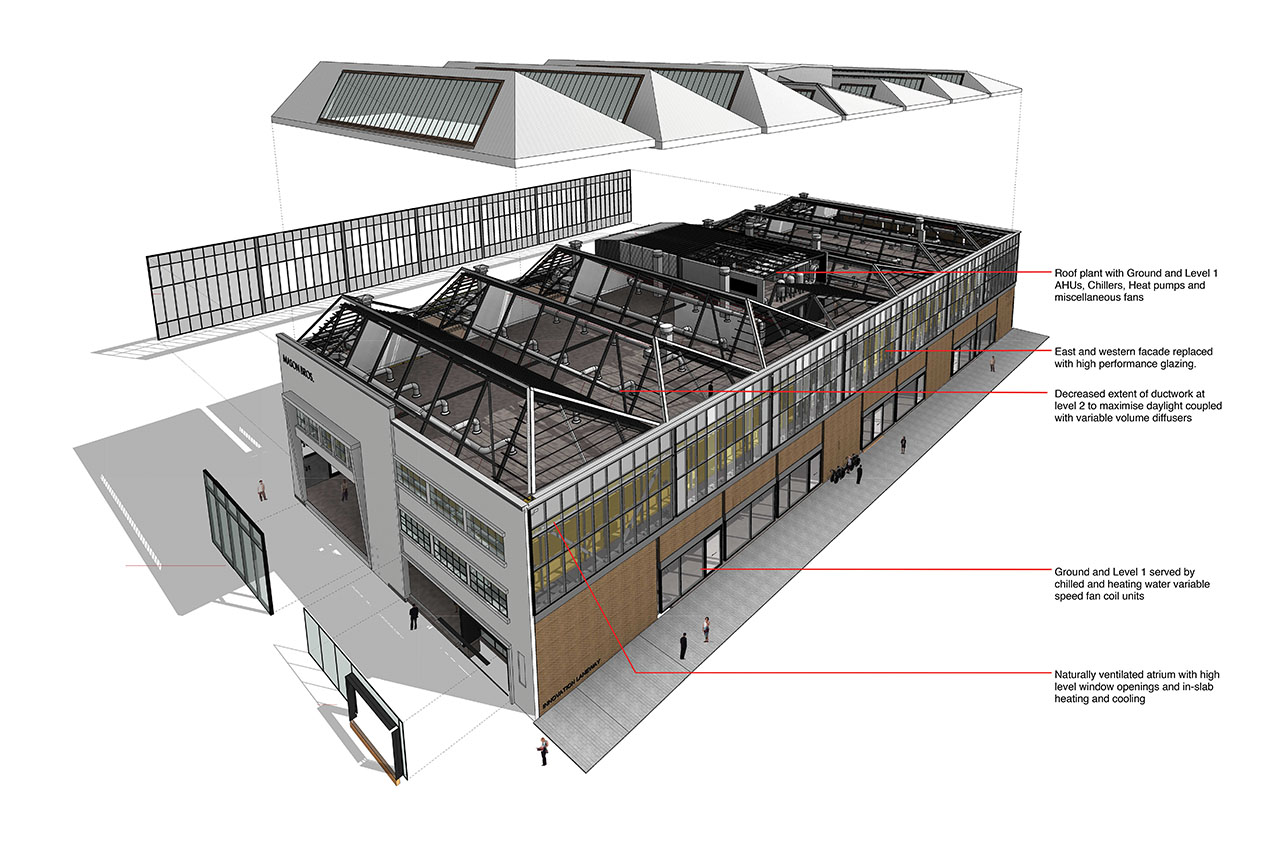 The optimised design is based on exploiting passive design features, such as the exposed thermal mass offered by the new floor plates, and using natural ventilation through the building’s main arcade to maintain comfort while minimising energy consumption.

The scheme’s roof also provides a large area of south-light glazing, and additional glazed openings were incorporated in the façade to increase the amount of natural light entering the building. ‘Getting the passive design strategy right and then minimising operational energy are obvious steps in the move towards sustainable design,’ says Calderone.

New Zealand’s successful containment of the coronavirus has meant the Mason Bros building has been able to fully reopen. When the country was at the highest level of its four-tier alert system, the building was closed to tenants. No specific HVAC Covid-19 measures were put in place, but the building manager brought forward a filter replacement.

When the alert fell to level two, most tenants operated with 50% of their staff on alternating weeks. This lasted only 2.5 weeks before restrictions were eased to level one, and the building was reoccupied.

The services are suspended from the underside of the exposed concrete soffits, with the pipework, ductwork, cable trays and seismic restraints enhancing the building’s industrial aesthetic.

Variable speed fan coil units (FCUs) provide heating and cooling to the offices. These incorporate electronically commutated fan motors to vary the fan speed based on heating and cooling demand. On the ground and first floors, the services are typically split into perimeter and internal zones.

On the second floor, a more minimalist approach was taken to maximise daylighting from the south lights. The FCUs at this level serve larger zone sizes to decrease the amount of ductwork. Supply air is via variable flow diffusers and fan speed is modulated according to static pressure, which ensures the supply fan operates efficiently. The system incorporates a reset strategy that decreases the static pressure setpoint, which results in a slower fan speed to achieve the required air volumes and, therefore, a decrease in energy consumption.

An extract from the federated model of mechanical services only, including central plant, risers, ductwork, pipework and fan coil units. The design is now used as part of the asset management tool

Two air handling units (AHUs) supply 100% outside air to the FCUs at more than double the NZ Building Code requirement. ‘We prioritised outside air rates and filtration efficiency ahead of energy efficiency to ensure the best internal environmental quality for the occupants,’ explains Calderone.

The AHUs incorporate electronically commutated fan motors to control the volume of outside air, based on CO2 levels in the space, through a combination of modulating dampers and velocity grids in the ductwork to each office space. The AHUs also incorporate heat recovery on the exhaust air to decrease the amount of energy used in treating the outside air. 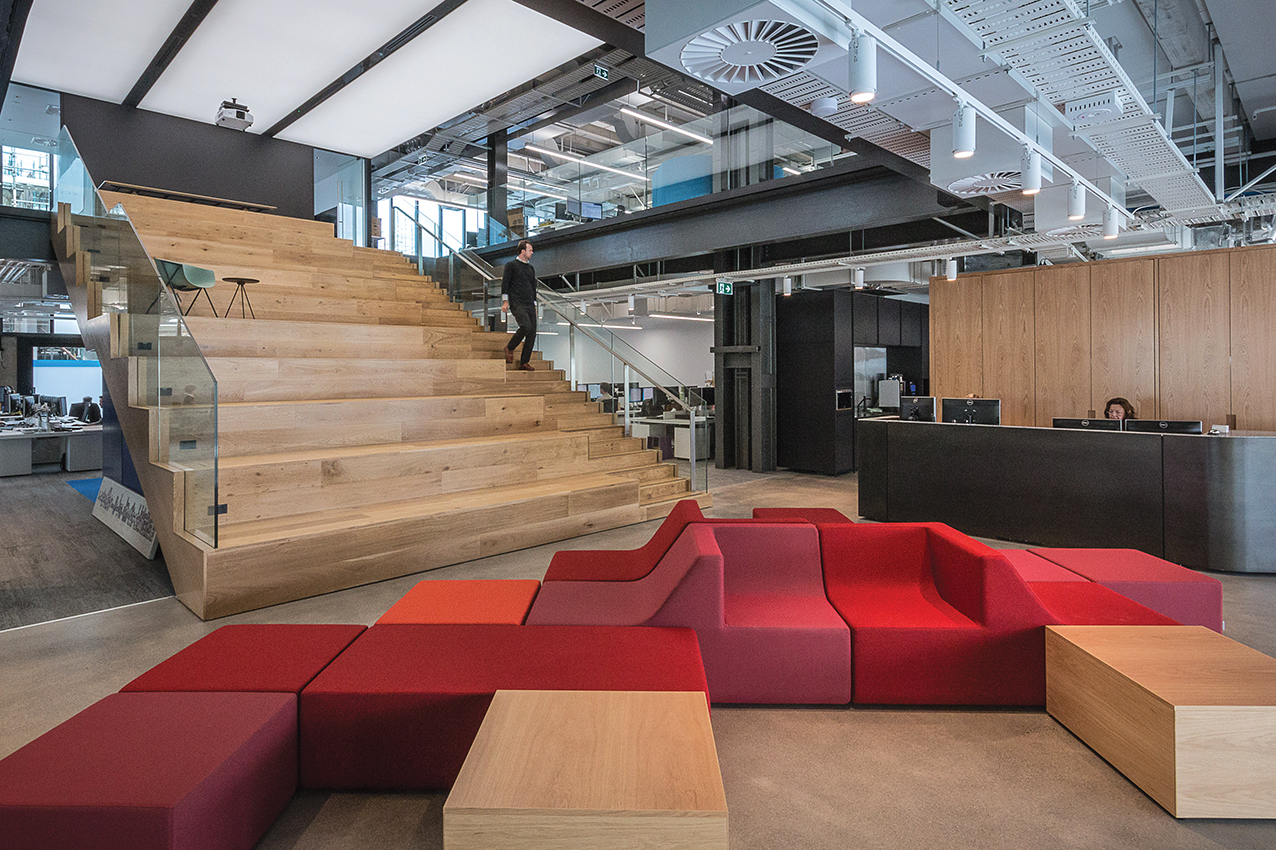 The FCUs and AHUs are provided with chilled and heated water from four reversible air-source heat pumps. ‘Standard, published “seasonal energy efficiency” figures commonly used in chiller selection are not particularly useful in heat pump selection, as they do not account for differences in building geometry, climate, user interaction and system design, which is different in almost all buildings,’ says Calderone. For this project, the design team employed a modelled building load profile mapped directly to detailed manufacturer’s part load performance data to more accurately predict energy use.

‘For Mason Bros, a chiller was selected with a non-standard part load value (NPLV) of 3.6 rather than an alternative with an NPLV of 4.1, because across the load curve, the chiller with the lower NPLV was better performing and was predicted to deliver a 5% decrease in energy consumption when compared with the alternative,’ he adds. 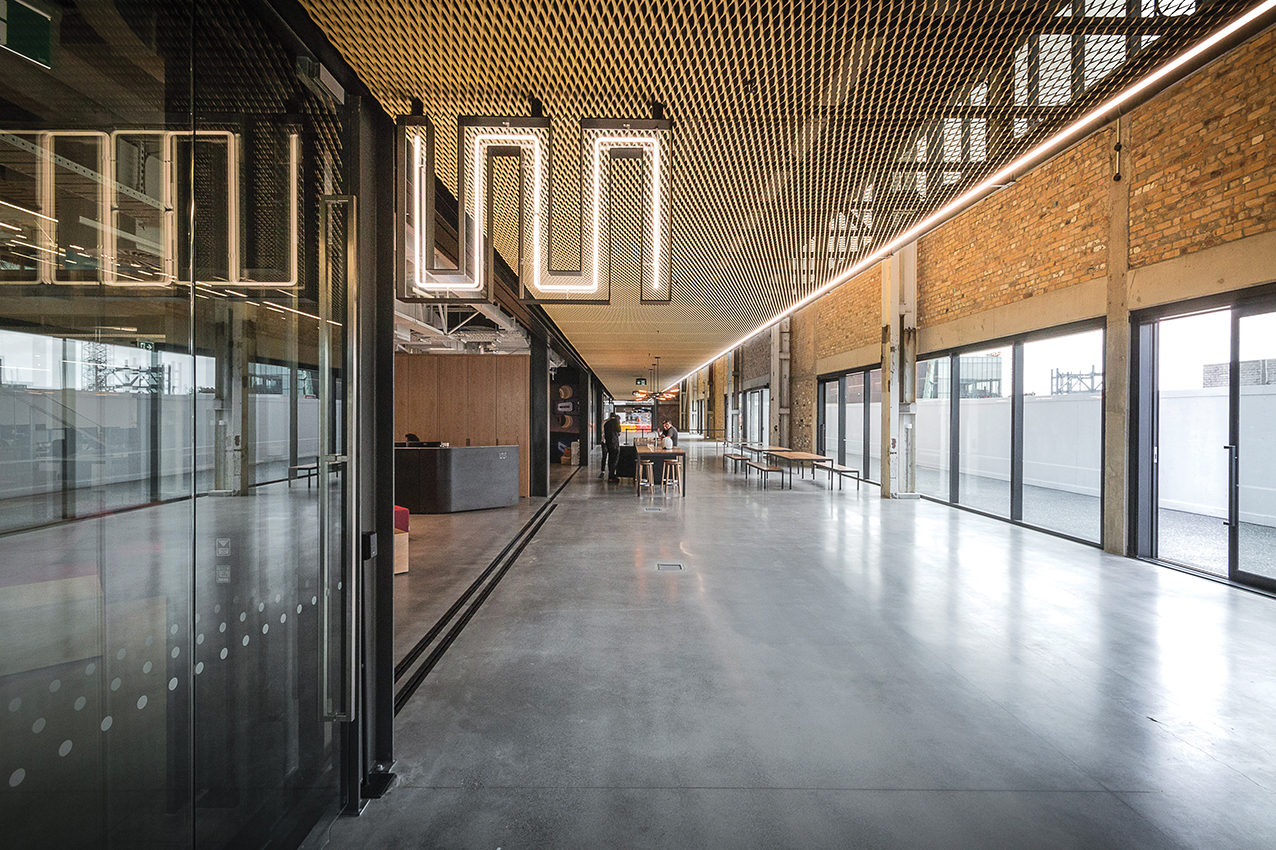 A fifth air-source heat pump is dedicated to supply heat to the domestic hot water via a calorifier; an electric element is used to boost the water temperature and provide system disinfection.

The offices are illuminated by an LED lighting system – which uses 60% less energy than the New Zealand building code requirement – with intelligent controls incorporating both occupancy and daylight level sensors. ‘The lighting levels are designed to minimise operational energy use, targeting less than 1.1W.m-2 per 100lux with a uniformity of more than 70%,’ says Calderone.

Perhaps the building’s most sustainable aspect is the comprehensive building tuning and commissioning programme Mott MacDonald developed with Precinct Properties. ‘The client’s commitment to building tuning played a huge part in its success, along with the project team’s adoption of BIM to enable working in an integrated way throughout the project, from design through to asset management,’ says Calderone.

Mott MacDonald’s building services design has transformed the Mason Bros building into a highly efficient, innovative and functional commercial workspace. To ensure it remained this way, Precinct Properties is using a digital asset information management system developed by Beca to allow vital asset information to be accessed via the Cloud directly from iOS devices.

The scheme was designed and constructed in a BIM environment. In addition, asset information was captured on site during construction using iPads. This was combined with data provided by the supply chain along with documents including manuals, commissioning data and warranty information, all of which was embedded into the 3D environment.

This enabled Beca to digitally hand over the asset information to support the building’s ongoing operation. The solution enables the digital management of the building’s plant and equipment with greater efficiency, transparency and accuracy.

This collaboration began early in the project’s design and has continued into the operation of the building. ‘Through early engagement with the facilities management team, Mott MacDonald was able to understand how the landlord intended to operate the building and was able to adapt its design accordingly,’ Calderone says. In addition, the project used an independent commissioning agent both pre- and post-system commissioning to further optimise performance. 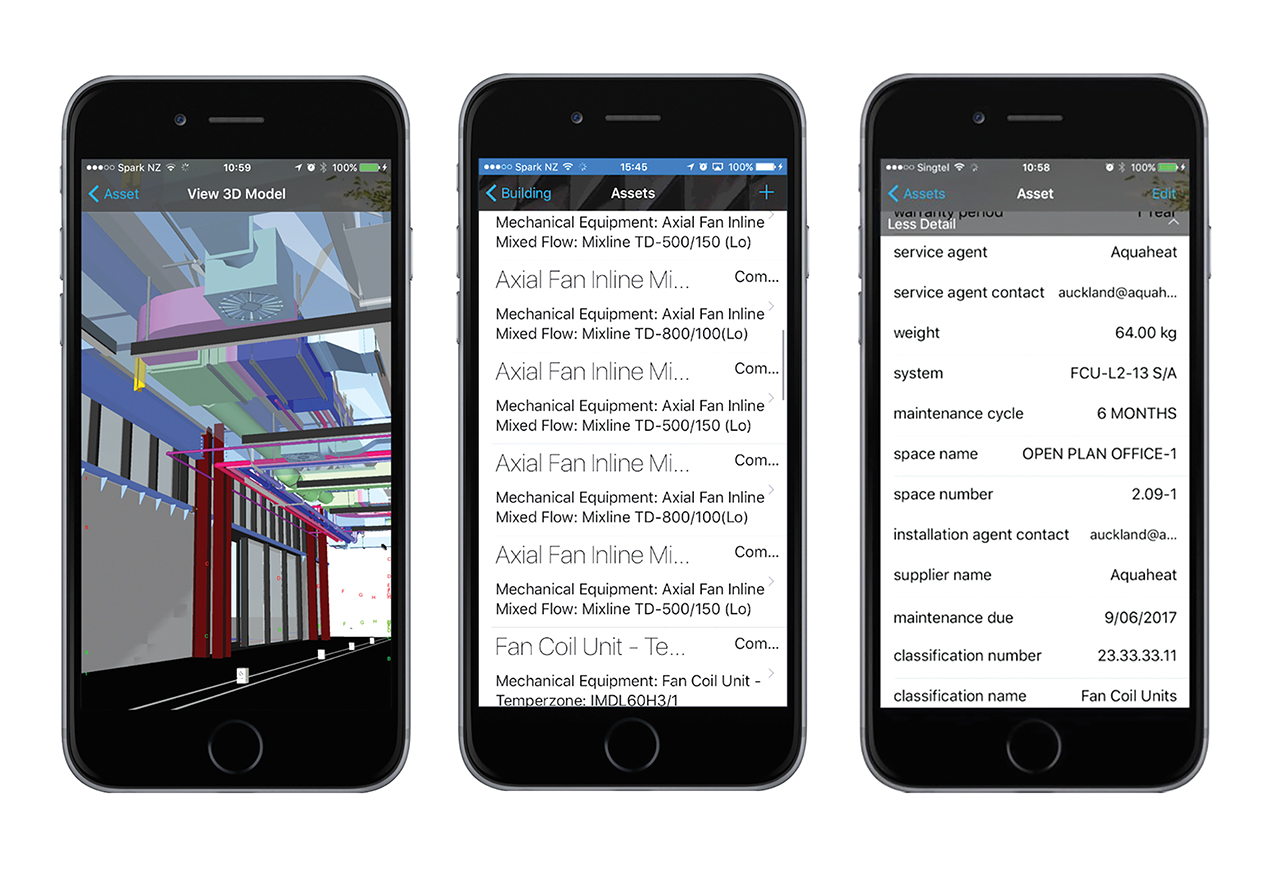 The commissioning was highly effective: after the first year of operation, the building’s energy use was 57kWh.m-2, representing a 30% improvement on typical best practice, achieving a 5 Star NabersNZ.

In its second year of operation, optimisation of the building services operation saw energy consumption reduce further to 48kWh.m-2, a 40% improvement over typical new building performance (assumed as 4.5 Stars under the NabersNZ protocol). The further improvement in energy use saw the building achieve a 5.5 Star NabersNZ rating, making this the highest rated building in Auckland and one of only five 5.5 Star-rated buildings in the country.

Andrew Eagles, CEO of the Green Building Council in New Zealand, sums up the scheme: ‘This building isn’t just one of the very greenest buildings in Aotearoa [the Mãori name for New Zealand] – it’s one of the greenest in the world.’ And, if further endorsement of the scheme’s success was needed, both the scheme’s architect Warren and Mahoney and its engineer Mott MacDonald have moved into Mason Bros

To find out whether Mason Bros was delivering on its strategy to create spaces that are healthier and more productive environments for its clients, a building use study (BUS) was conducted. The BUS is based on a user survey, which included questions on workspace design, access to windows, thermal comfort, air quality, noise, lighting productivity and perceived control. It was carried out approximately 12 months after practical completion.

The developer had already carried out a BUS survey on four of its buildings located in Auckland’s central business district, none of which were Green Star rated. So in 2018, a BUS was carried out to see how Mason Bros compared against these.

‘Post-occupancy research in the Mason Bros property has confirmed the advantages with up to a 25% drop in absenteeism, occupants indicating an increase in their personal productivity of 8.5%, and a massive 130% increase in cycling following the move,’ says Alain McKinney, senior development manage at Precinct Properties.