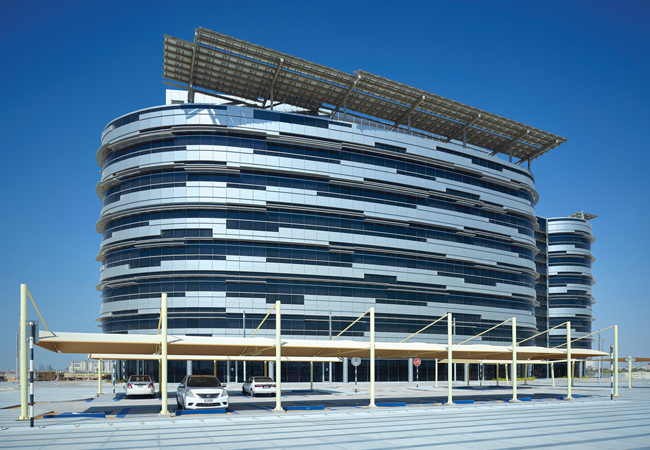 It is fitting that the new headquarters of the International Renewable Energy Agency (Irena) in Masdar City, Abu Dhabi, should be an exemplar of sustainability. So when it set the brief for the project, client Masdar gave the design team a list of sustainability key performance indicators (KPIs) that the scheme was expected to meet.

The most challenging KPI was to deliver the first building to achieve a four Pearl Rating under Abu Dhabi’s Estidama sustainability rating system. Others included: an energy demand reduction of 50%; renewable energy to provide 20% of the total energy demand; and a reduction of 30% in water consumption compared to a typical Abu Dhabi building.

Building services engineers Buro Happold, working with architect Woods Bagot, had the task of designing the exemplar scheme for Masdar, the organisation responsible for delivering Masdar City. To their credit, the design team has succeeded magnificently, with a building that looks part-spaceship, part-corporate office, and that requires 50% less water than typical buildings in Abu Dhabi, and 64% less energy. 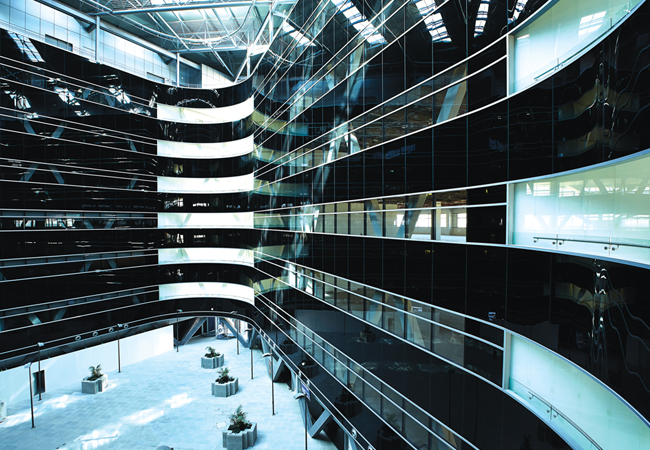 The glazing has been optimised to minimise heat gains and maximise daylight. Caption: Phil Handforth

The success of their solution is down to extensive modelling from the outset. To start to develop a form for the giant building, Buro Happold and Woods Bagot used a parametric model with parameters input from the briefing information and the KPIs.

‘We had a total floor area of 32,000m2 and a series of KPIs that we had to achieve, so we set about developing the initial design using parametric modelling through a series of workshops,’ says Jamie Low, associate engineer at Buro Happold.

From the start, the team set about developing a holistic solution. ‘It was all about passive measures and how the building form could be designed to reduce energy consumption,’ Low explains. ‘Only later did we do a detailed analysis using computational software.’

Extensive modelling produced a design based on a triangular-shaped building formed from three, seven-storey, oval-shaped office towers, interconnected by three atria. The atria house the main entrances to each of the towers, plus the stair and lift cores. The office towers and atria surround a giant, seven-storey, triangular-shaped atrium covered by a large, flat triangular roof. This space has been designed to be shared by all three offices; it includes ground-floor cafes and shops. ‘The building’s triangular form evolved from testing multiple thermal modelling options to optimise the buildings shape and façade performance, while ensuring the office floor plates remained efficient,’ says Low.

Services to the office floors include variable speed FCUs to provide cooling. These incorporate a condensate to collect precious water

In the final building, one of the office towers has been occupied by Irena, while the remaining two form a speculative office space.

Low describes the approach to the design as ‘lean, mean and green’, by developing passive solutions first to reduce energy consumption to meet the KPIs. ‘Initially, we developed the design to reduce demand, then we set about supporting the design using renewables,’ he says.

As the design evolved, the proposed solutions were reviewed. ‘Our decisions were audited and the life-cycle cost evaluated as we developed the design to ensure we were making the right decisions,’ Low explains. ‘This process was the key to the energy reduction strategy – once we had reduced the demand, we could select the most appropriate engineering system.’ 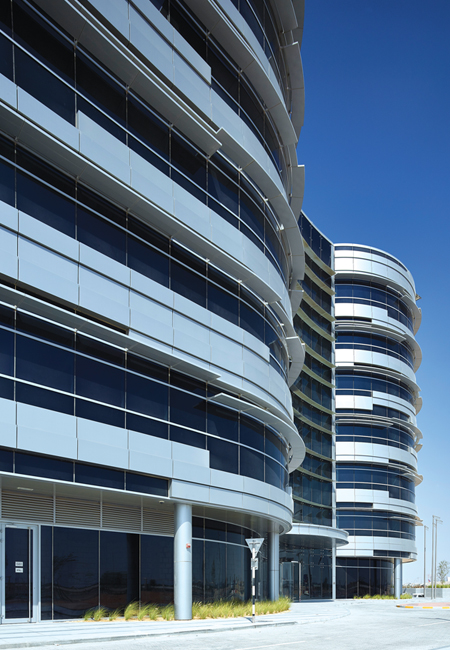 Horizontal and vertical shading devices are on the facades. Caption: Phil Handforth

Evidence of the success of the cooling energy reduction strategy is provided by the building’s façades, which have been gently curved to minimise the impact of solar gains at any particular time. Similarly, the amount of glazing in the façades has been optimised at 30% to minimise heat gains on the office floorplates, while maximising the amount of daylight that can enter the floorplates.

The façades incorporate high-performance tinted glass and high-efficiency insulation to enhance their performance further. ‘The proportion of glazing to solid material has been optimised to reconcile energy efficiency with maximising daylight and views,’ says Low.

To minimise heat gains from direct sunlight, the façades incorporate both horizontal and vertical shading devices. The orientation and positioning of the shading varies depending on the façade to which they have been fitted. Beneath it, the façades have been designed to be airtight, with a leakage rate of less than 5m3·m–2-·h-1 at 50Pa, which is important in minimising cooling loads because the air is so hot and humid. In total, the building is claimed to have a 55% reduction in cooling demand compared to the baseline Ashrae 90.1 energy model through the incorporation of passive design strategies.

Behind the highly insulated façade, the building’s servicing strategy is remarkably conventional, with each office tower serviced independently. Services to the office floors include variable speed fan coil units (FCUs) to provide cooling. These incorporate a condensate recovery system to collect precious water for reuse in the building. As is common in the region, chilled water is supplied from an off-site energy centre, which has been designed and constructed to serve several buildings. ‘The energy centre allowed us to diversify a lot of our load associated with cooling, which is significant,’ Low explains.

Fresh air is delivered to the office spaces on a demand-control basis, using CO2 monitoring to reduce energy demand. The air handling units are fitted with high-efficiency rotary thermal wheels for sensible and latent heat recovery. Up to 75% of the energy in the exhaust air is recovered and used to help cool the incoming fresh air.

Low says it was ‘a client aspiration to showcase renewables’. As such, the scheme incorporates a solar thermal system, which supplies 75% of the building’s hot water demand; it also includes a huge 1,000m2 rooftop PV installation, which can generate up to 305,000kWh of electricity annually – approximately 8.5% of the building’s total energy requirement. Together, the two systems will supply more than 10% of the building’s energy demand. ‘The building also has the flexibility to feed into the grid, but that was not one of the KPIs,’ says Low.

The scheme achieved the Estidama four Pearl Rating for design. Brookfield Multiplex, which constructed the building under a design and build, and shell and core contract, was the first contractor in the region to achieve such a rating for construction.