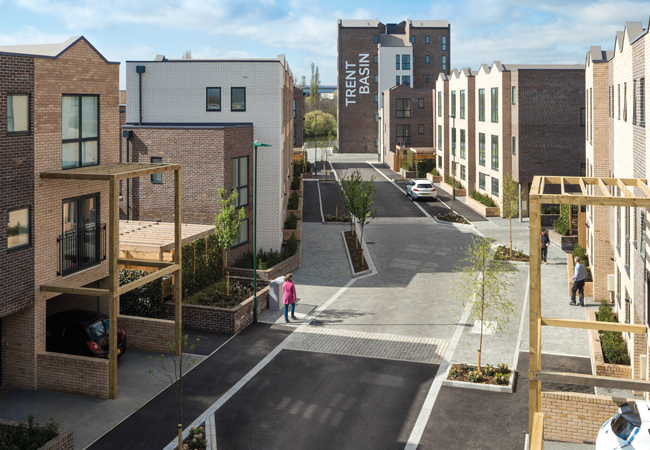 ‘It’s not been a straightforward project – it has been much more difficult than we first anticipated for numerous reasons, which has been valuable learning for future schemes,’ says Professor Mark Gillott, chair of Sustainable Building Design at the University of Nottingham’s department of architecture and built environment.

He’s talking about what is currently Europe’s largest community energy battery installation at the Trent Basin housing development in Nottingham. The university is one of a number of organisations involved in the project with the intent to establish a model for low-carbon community energy schemes across the UK. ‘We should have been on site months ago and, instead, we finally started on site on 4 December with installation of the energy infrastructure,’ he says.

The development of more than 500 homes on the banks of the River Trent is being built in five phases by Blueprint, a developer specialising in the construction of sustainable homes.

Blueprint has been working with Gillott’s university team for a number of years to improve the sustainability of its projects.

‘Initially, I wanted to install photovoltaic panels (PVs) on this scheme but, now that the feed-in tariffs have reduced, I couldn’t make the numbers work,’ says Nick Ebbs, CEO at Blueprint. ‘So when the possibility of using communal energy storage came up in our discussions, we thought this could be a way to make PV work.’

Together, they decided to trial battery technology on a commercial basis as part of a community energy scheme at Trent Basin.

The project is funded through matched industrial investment, the Energy Research Accelerator and Innovate UK. It is being coordinated through a consortium of experts within the Innovate UK Sustainable Community Energy Networks project (ProjectSCENe), including the University of Nottingham, AT Kearney, SmartKlub, Urbed, Blueprint, Siemens, Solar Ready, Stickyworld and Loughborough University. 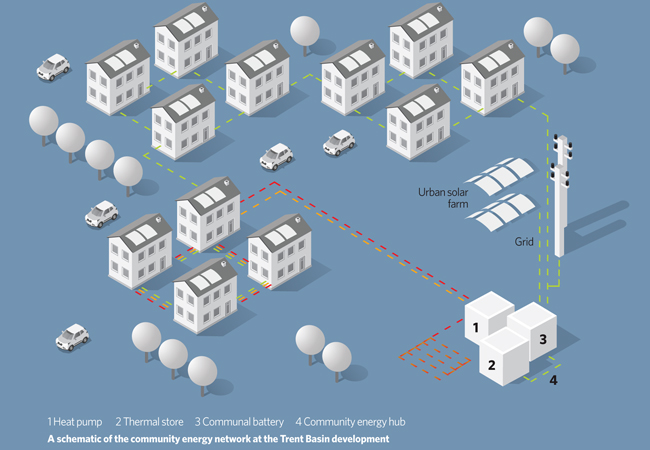 ‘Although the technology is established, I wouldn’t have committed to this project without the grant because there isn’t a proven demonstrator and the business models don’t yet exist,’ says Ebbs.

‘In fact, our pitch to Innovate UK was for this to be that community energy demonstrator. We said we’d either demonstrate how you can do it, or why you cannot do it, and, in so doing, we’d show the government what needs to be done to make community energy happen.’

The project concept is to be pragmatic – so new developments can more easily approach carbon neutrality while earning revenues to repay the capital cost of the scheme and reduce residents’ energy bills. Phase 1 generates electricity on site through PVs installed on the roofs of the dwellings or from the urban solar farm. This generated power is then fed, via private wires, to the battery, connected to the grid. Phase 2 will see the incorporation of a heat pump network and thermal store, also powered by the PV and battery.

Revenues will be earned from grid and heat sales. Residents are free to choose their own electricity supplier. This setup allows price arbitrage to be used consistently with the carbon mix of the grid, for example importing at night and exporting at some points of the day.

The battery will also be used to supply or absorb power from the national grid under a frequency response-type contract. ‘The frequency response contract is potentially a significant revenue driver that will help pay for this kit,’ says Ebbs.

The plan is to have the community energy network run by an Energy Services Company (ESCo), the model for which is being established by SmartKlub.

Construction of the first 50 homes under phase 1 of the project was already under way, without the rooftop PVs, before the funding was in place and the energy infrastructure had been developed. However, to ensure the scheme could accommodate the community energy solution later, the developer installed the private wire infrastructure.

Because the energy scheme started after the detailed planning permission had been granted for phase 1, the roofs are not aligned for optimum PV use. However, the energy team – working in collaboration with Blueprint’s architects – have influenced the roofscape for phases 2, 3 and beyond, to ensure the designs promote efficient PV deployment. Not only did the teams consider the orientation of the PV scheme, but also the buildability elements, ensuring the roof designs offer appropriate mechanical fixings – installed with the roof, not retro-fit – and that the homes are able to accommodate the cable infrastructure without adaptation.

It is also expected the ‘integrated systems’ – for example PV and thermal – will be installed using the same scaffolding access equipment as the developer, further reducing cost and timescales. PV systems will be retrofitted to the phase 1 homes where appropriate. The differential in PV yield versus cost between phase 1,2 and 3 will enable the energy analysts to understand the correlation between a fully integrated new build and a retrofit scheme, allowing the final report to advise on the costs of both. 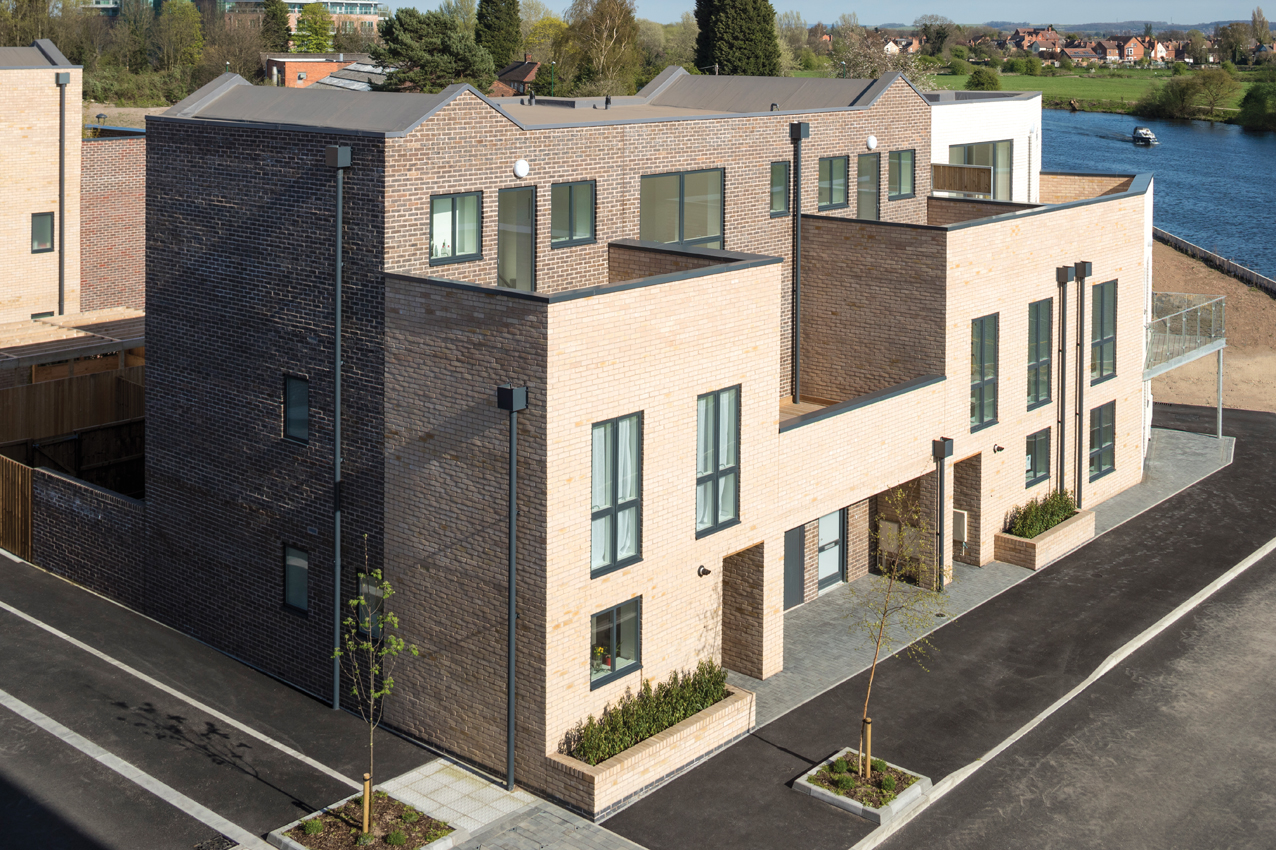 In this community approach there are challenges, which the team is currently working through. For example, individuals will have a PV panel owned by the ESCo on the roof of their home. New roof lease agreements needed to be drafted to ensure that the ESCo could operate and maintain the PV installation, and that both the home owner and the potential mortgage lenders were satisfied their own interests had been accommodated and maintained.

To operate the community energy scheme as a commercially viable entity, it relies on a minimum amount of PV being used for generation. However, there are currently very few new roofs on which to install the new PV as the homes are being built. Interestingly, the scheme includes what Gillott refers to as a ‘meanwhile-use urban solar farm’.

This solar farm (200kWp) has temporary planning permission for three years and is an innovative answer to this dilemma. Effectively, it is a temporary solar farm built on land that will be developed later in the project, which enables the scheme to generate a substantial quantity of clean renewable electricity from day one. ‘The idea is that as the developer builds on the land, the PVs on it are uplifted onto the houses that now occupy the site, so that the panels get reused,’ says Gillott. 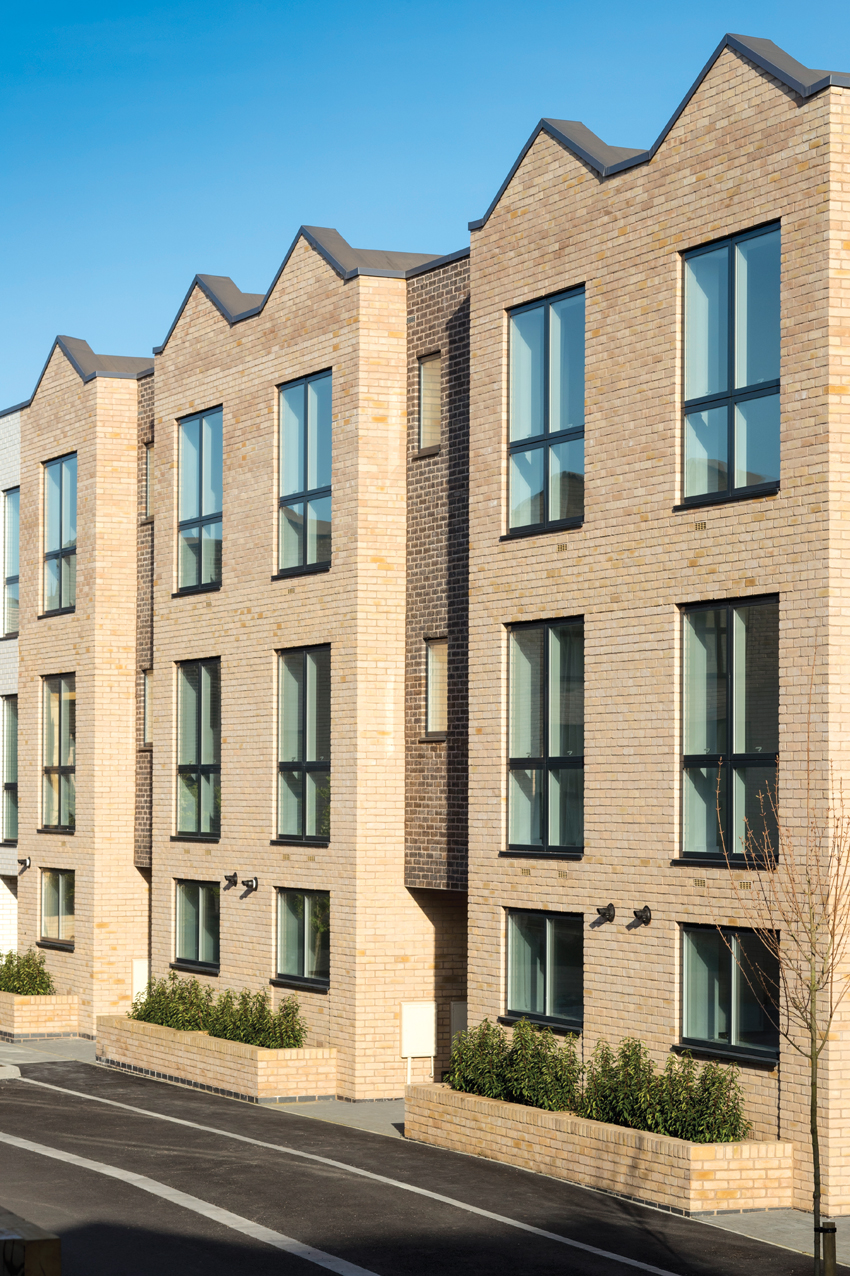 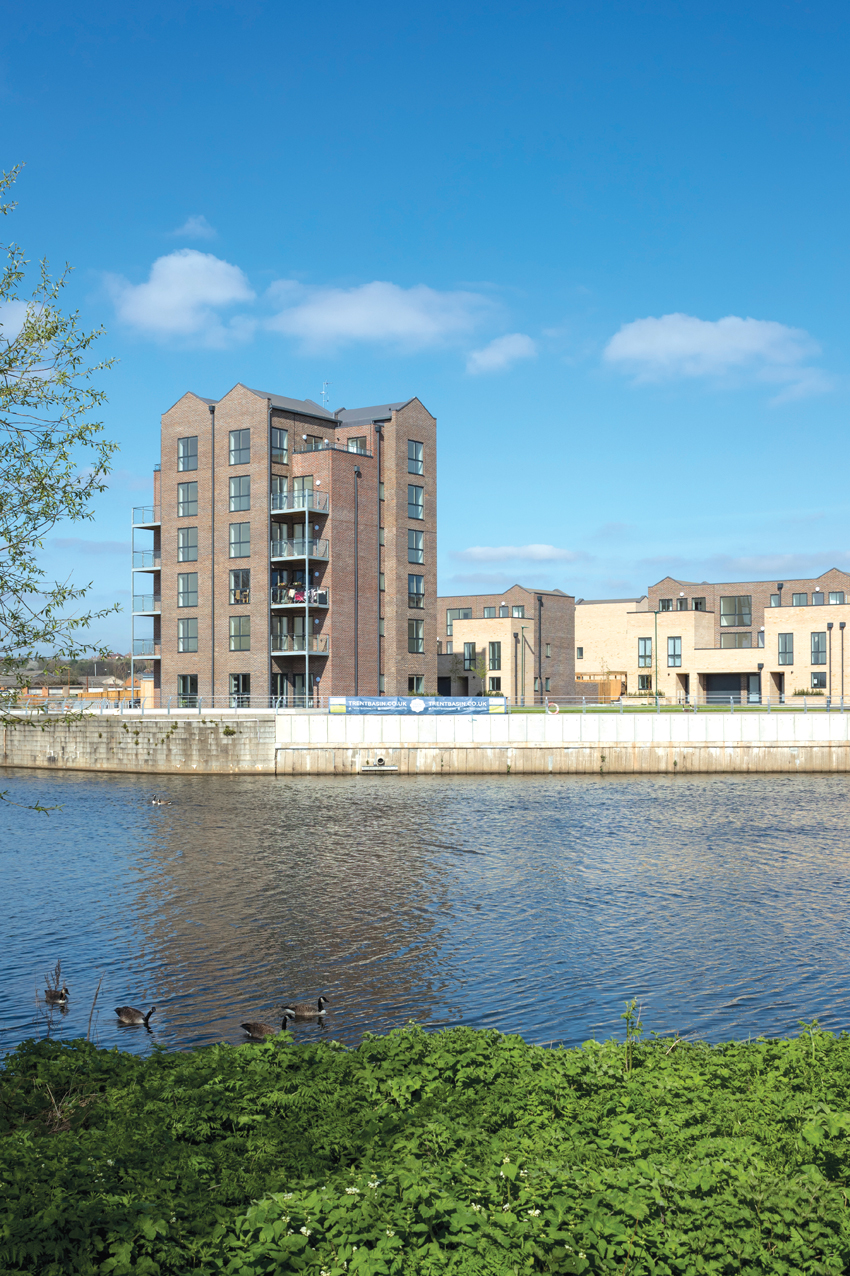 Power generated by the PVs can be stored in a giant 2.1MWh battery, sized to be future-proof.

‘This will be a 560-home development when all phases have been completed; the battery will serve all these houses and more,’ says Gillott. ‘We’ve done a lot of work on modelling to optimise the size of the systems and batteries for different loads and demands from the community, combined with different scales of generation, to come up with a sweet-spot for the battery size based on the rate of return on investment,’ he says.

Mark Brown, representing Solar Ready, explains: ‘The primary governor for the type of battery, its chemistry and capacity, is the way you are going to use the battery and the number of cycles – from fully charged to discharged – it will be expected to complete over its lifetime,’ he says.

‘If you buy a battery designed for 6,000 cycles for a scheme with an energy model, which shows it will complete one full cycle per day, then you will have 6,000 days’ use from the battery before it has degraded in line with the manufacturer’s predictions. This might only be 40% of its capacity when new,’ he adds. ‘However, if you’re going to exercise the battery for frequency response, you might want to cycle only 30 times a year, in which case, you will get many more years’ use out of the battery.’

The algorithms to be deployed by the University of Nottingham will seek to understand the correlation between energy storage and its efficiency given the potential loss of performance over time/use. This will be quite an undertaking, considering other potential influencers that will be introduced with the thermal store implementation.

One goal we had at the outset was for developers to move away from the default position of a wall-hung, gas-fired, condensing boiler – Mark Gillott

The 2.1MWh capacity battery storage system is manufactured by Tesla and is of lithium ion chemistry. To ensure it is operated safely and within the manufacturer’s warranted use, it has been supplied complete with its own battery management system.

The scheme has a 500kW inverter, used to turn DC into 3ph AC for use on the grid circuits. This relatively low ratio ensures the battery store will not be ‘stressed’ under normal use, further increasing life expectancy of the asset. The community energy system has a standard 1MW connection to the local DNO substation which, in addition to the output, also has to accommodate the potential 300 kWp exported from the PV installation.

‘We’ve signed a deal via an aggregator so that, if the national grid demands a frequency response provision from the battery, we can supply 500kW of power,’ says Brown. ‘This ensures that the community energy scheme is able to attract revenue to sustain the operational costs while also providing community energy benefits, cementing its commercial viability.’

‘We’ve signed a deal so that if the national grid demands a frequency response provision from the battery, we can supply 500kW for up to half an hour at a time, twice in any 24-hour period,’ says Brown. ‘Because we’ve got four hours of potential supply, 50% of the battery is available for community use,’ he adds. 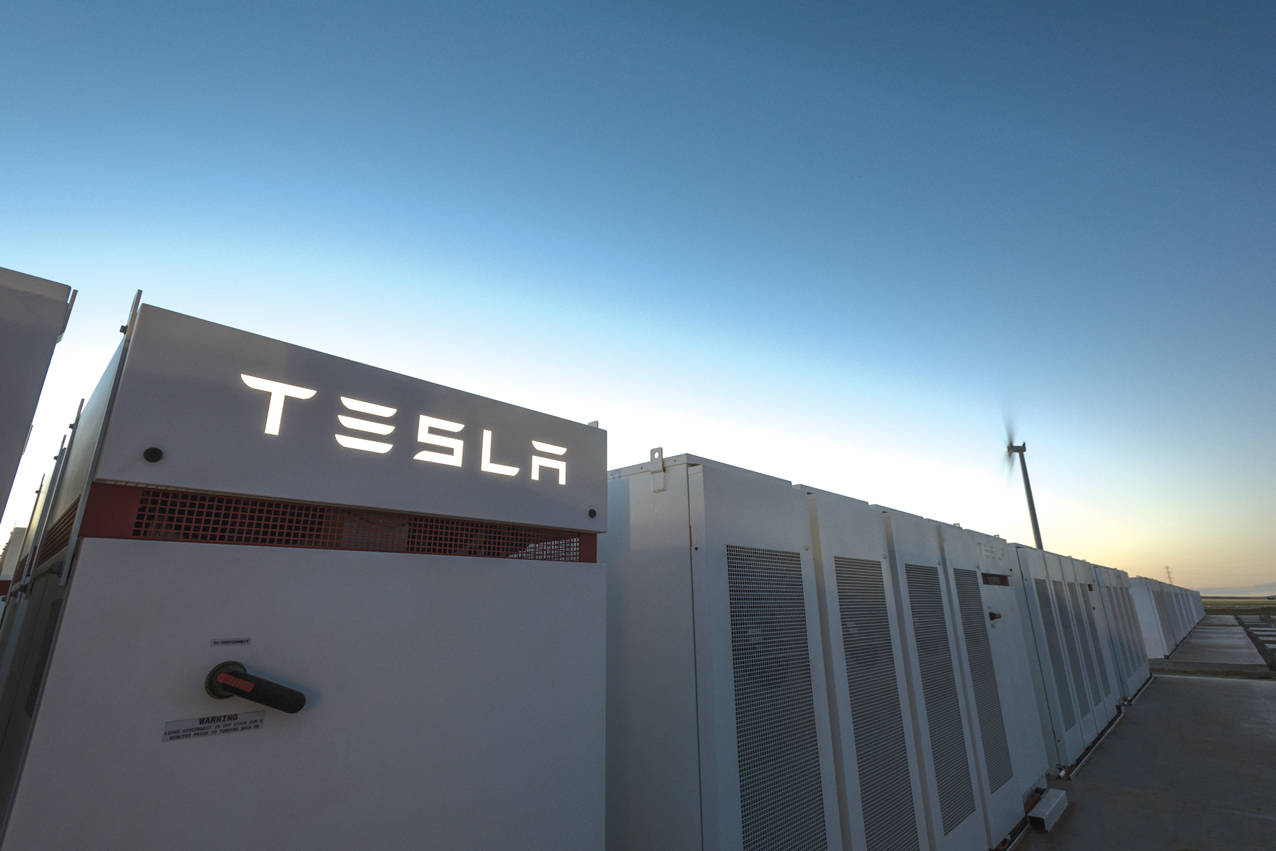 The capacity battery storage system is manufactured by Tesla

The battery is housed in the project’s energy centre along with a new sub-station and ring main unit – an expensive addition the team had not anticipated at the outset. ‘When we set out on the project, we assumed we’d connect to the low voltage, 415V, three-phase side of the grid,’ says Brown. ‘However, when the application went to Western Power Distribution, because of the power requirements and the 1MW connection we wanted, we were required to connect to the high voltage 11kV side of the network, meaning the budget had to stretch to buying the new associated electrical infrastructure.’ These elements offer valuable learning and will be included in the final published reports.

In addition to storing electricity, the scheme will also have a thermal store, constructed under the later phases of the project. It will connect to ground source heat pumps powered from the battery.

The interplay between heat and power is crucial, enabling the bigger issue of how to decarbonise heat by removing the need for gas combustion to be addressed. ‘One goal we had at the outset was for developers to move away from the default position of a wall-hung, gas-fired, condensing boiler,’ says Gillott.

The battery is set to go live on 1 June as a commercial entity, once all the trials for grid compliance are complete.

Ebbs has already embraced the solution. ‘By doing it at a communal level, you can drive very significant efficiencies by having one big battery, rather than lots of individual ones, and you can also aggregate demand and supply to make more efficient use of the supply that is being generated across the community,’ he says.

‘We’ve now incorporated electric car charging and are looking at battery powered bikes because, through the battery, we can make electricity available for charging relatively cheaply and, in the future, we might even be able to use car batteries as part of the storage process because, for 95% of the time, cars go nowhere,’ he adds. ‘It is coming together really interestingly as a holistic solution fit for purpose in the 21st century’.